Generation Share: the generation that is saving the planet

“My name is Greta Thunberg I am 16 years old. I come from Sweden. And I speak on behalf of future generations, I know many of you don’t want to listen to us – you say we are just children. But we’re only repeating the message of the united climate science. Many of you appear concerned that we are wasting valuable lesson time, but I assure you we will go back to school the moment you start listening to science and give us a future. Is that really too much to ask?”

Greta Thunberg is a change-maker. When, on 20th August 2018, she skipped school and took her position outside the Swedish parliament building holding a handmade sign ‘skolstrejk för klimatet’ (school strike for climate), she had no idea that she would spark a global youth movement to shame the world’s leaders into taking action on climate change. Greta epitomises the spirit of the awe-inspiring change-makers featured in Generation Share, publishing on June 17th to celebrate Global Sharing Week. Generation Share takes readers on a journey to meet the people who, like Greta, are changing and saving lives using the power of sharing. In concert, they are spearheading a global shift to a sustainable Sharing Economy, one that considers people and planet before profit.

Over 2 million students from 125 countries, inspired by Greta and stirred to take immediate action have joined #Youth4Climate and Fridays For Future (FFF) which has seen a series of school strikes worldwide. Known as Generation Z, this activist cohort joined the planet between 1998 and 2016 and are expected to reach 2.56 billion (or 33% of the population) globally by 2020.[1] Post-millennial, digitally native they have no knowledge of a world without Wi-Fi, smart phones or YouTube and are using their exposure to technology, combined with endless information and choices, to change the world. 76% are concerned about our human impact on the planet[2] and are taking action, claiming their future depends on it.

Indeed, all 200 change-makers that feature in Generation Share, are finding ways to build an alternative economy and with it, a sustainable future. 16-year-old Monty Anderson from Brighton, belongs to Prequel, a youth-led, horizontally oriented, direct action campaigning group that takes on issues relevant to young people. As Monty explains, “we share the burden of activism, the direct action. Political parties revolve so much around one single person yet humans are really flawed. When you have collective groups that have collective views, rather than the views of an individual, you can get better results, because you are not relying on one single person’s morality, you are relying on a group.”

Monty is part of a generation that have watched adults fail the planet and those who live in it. Generation Z recognise that to secure a future for themselves, they have to make governments and leaders around the world wake up and take immediate action, sharing responsibility for climate change. Youth activists are leading a growing chorus of voices protesting the urgency of climate action with recent Extinction Rebellion protests in London bringing the city to a standstill.

With overwhelming scientific consensus that climate change is caused by human behaviour[3], to minimise the risks, global carbon emissions must be cut to net zero by 2025, according to Extinction Rebellion. If temperatures go beyond the 1.5C threshold, experts fear climate change could become unstoppable within the next decade. For a younger generation, this is simply not an option.

Monty, from Brighton-based Prequel agrees that our current economic model has failed and what’s needed is a radical re-structure, “I hope that sharing will entirely reshape society and we will no longer rely on this model of being rented by someone to work, in order to rent land and then live. I wonder if we could just co-operatively share labour. It would be the sort of end of the capitalist cycle and it would be sustainable. The economy I’d like to see is no economy. In some areas, we have complete abundance but it is artificially kept scarce. I wonder if we could almost get rid of economies entirely. We have so much food and so much technology, we’re on the brink of automating production. We do not need an economy at all.”

Benita Matofska is an international public speaker, change-maker and world-leading expert on the Sharing Economy. An award-winning social entrepreneur, she created the charity The People Who Share and Global Sharing Week. Through social innovation, Benita helps organisations become change-makers and features regularly in the media worldwide. @benitamatofska

Sophie Sheinwald is an award-winning visual storyteller who specialises in photography with purpose. Drawing on her background in fine arts, visual studies and community art, she combines her ability to connect with her passion to help people and businesses create meaningful, mission- driven brands. @sophie_snap 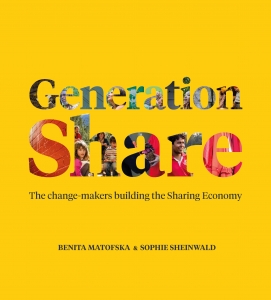 Generation Share will be published on June 17th to celebrate Global Sharing Week and evidence the power of Sharing to save and transform lives. A collaboration between speaker, change-maker and global Sharing Economy expert, Benita Matofska and photographer Sophie Sheinwald, Generation Share brings to life the phenomenon that few know is causing the most significant shift in society since the Industrial Revolution. Printed sustainably from waste materials, each copy will help to educate a slum-based girl in India and plant a tree via the Eden Reforestation Project. Order here for £20.00.