Today’s crisis calls for social transformation beyond the capitalist horizon

We are in the midst of a pervasive sense of crisis, which for many of us feels overwhelming. The growth of precarious work and automation, accompanied by deep and systemic poverty, along with crises around migration and the environment present an uncertain future.

Here, Tom Vickers, author of Borders, Migration and Class in an Age of Crisis, part of our Global Migration and Social Change Series, argues that underlying the multiple crises of contemporary society is the crisis of the social system by which our society is produced and reproduced: capitalism.

…a situation that breaks with routine and calls for immediate action. The occurrence of a crisis calls for immediate judgement and decision making, but in circumstances with limited room for manoeuvre.… By labelling a situation as a ‘crisis’ one creates alarm, suggesting the existence of a threat to the ordinary lives of the populace.… The political response … may point to the conservation and consolidation of the legal and political order … or it may open a space for political change.

Indeed, the etymology of crisis is ‘decision’, in the sense of a judgement, from the Greek ‘krisis’. Crawley et al point to the way in which crisis narratives have run together, suggesting that the so-called ‘migration crisis’, ‘was symptomatic of, and became shorthand for, a range of economic, political, foreign policy and humanitarian crises taking place at the national, regional and global scales’ (131), as part of a process, ‘beginning back in 2008 with a global financial crisis which triggered the European financial and debt crisis associated with far-reaching austerity policies’ (130). More recently, the environmental crisis has become associated with migration, with the United Nations suggesting that states’ commitment to human rights may not survive the pressures created by climate change.

In recent years crises of immigration and welfare spending have been presented as an explanation for the daily problems of poverty, precarious work, declining services and housing that face large parts of Britain’s population. The sense of threat conjured by the idea of a ‘migrant crisis’ has been used to justify further restrictions on migrants’ rights, such as the restrictions on access to health care, education, housing, employment and other areas of everyday life that has been described as a ‘hostile environment’, and have been offered as a misleading explanation for problems affecting wider sections of the population as a result of austerity. It is Britain’s ruling classes that have been most successful in making ‘personal troubles’ into ‘public issues’, to paraphrase C. Wright Mills, but in a way that mobilises collective action in concert with the state, against oppressed sections of the working class. The absence of any significant independent working-class movement has given such interventions free rein.

We have moved a long way since the triumphalist declarations of the ‘end of history’ that followed the destruction of the Soviet Union, and the 1997 Labour government’s promises that it had escaped the ‘boom and bust’ cycle. These claims rang hollow in 2007, when the subprime mortgage crisis in the US set off a global chain reaction leading to the most severe economic crisis in a century. Britain and other capitalist states responded by injecting massive amounts of public money into the banking system, followed by sweeping cuts to state welfare. Since then the economic recovery has been ‘sluggish’ at best, and even many pro-capitalist economists predict further crises in the near future.

An analysis, of what Marx calls the ‘laws of motion’ of capital accumulation, shows that far from being exceptional, or the result of poor regulation, bankers’ greed, or other moral or policy failings, crisis is intrinsic to capitalism. The period of the post-war boom was the exception, not the norm. This means that to have a realistic chance of escaping the crisis and its attendant poverty and precarity, we need to expand our ideas of what is possible beyond the limits imposed by capitalism.

The productive labour of human beings lies at the centre of society. Yet under capitalism ‘good work’ has never been achieved for the majority, when considered in historical and international perspective. It was only achieved for a sizeable portion of workers in Britain and some other imperialist countries during an exceptional period and at the expense of more intense exploitation, and attendant immiseration, in underdeveloped countries. Today the severity of the capitalist crisis is combining with Britain’s declining international position to drive growing numbers of previously privileged workers into conditions of exploitation and deprivation closer to those that have always been the norm for the majority. The British border regime continues to shift and expand its operations, operating both far beyond British territory, in external border zones such as the Mediterranean, and internally. It has ensnared increasingly broad sections of mostly racialised minority citizens, as seen with those members of the ‘Windrush Generation’ who moved to Britain decades ago and have formal citizenship but lack documents to prove this. Brexit threatens to further widen the net to also include many European migrants.

Capitalism’s imperative to increase surplus value, which has been made more urgent by its crisis, is driving new forms of exploitation, internationally and domestically, supported by the growth of precarity. Precarity represents a hidden labour reserve, and disciplines workers through insecurity. Increasing numbers of precarious workers face pressure to make the entirety of their time and mobile capacities subject to the demands of capital, while also finding themselves responsible for their own reproduction, as state support is cut, and in some cases their own management, through various forms of bogus ‘self-employment’. This precaritisation takes many forms, and the different terms on which groups of workers are exploited is an important mechanism by which exploitation is increased overall. This calls for a range of responses, but there is a common thread in the struggle over how, where and when people exercise their productive capacities.

Capitalist exploitation can only be effectively resisted, and ultimately transcended, through workers’ taking control of their mobility, requiring collective action. This in turn requires the reclaiming of control over land and the means of production, the dispossession of which enables the ruling classes to enforce waged labour. Such collective action requires organisation guided by an independent working-class perspective, and that requires critical engagement to develop alternative narratives that challenge capitalist ideas. Because the state plays such a central role in structuring the working class and disciplining mobility, asserting workers’ control over their mobility requires struggle against the state. Because domination and exploitation are normalised by hegemonic discourse, these struggles must also rearticulate the nature of the crisis, challenge the divisive categories that structure exploitation, and identify new points of connection among the working class.

Such an approach is already evident in the perspectives of some grassroots campaigners, such as those I have interviewed from Sisters Uncut, Focus E15, the Migration and Asylum Justice Forum, Docs Not Cops, and Nottingham Housing Justice Forum; such perspectives currently lack influence and are embodied in campaigns that are small-scale and fragmented, but show that it is possible to combine systemic critique and demands for change with short-term victories. There is an urgent need today to strengthen connections between campaigns that already exist, to expand their reach through open and democratic organising, and to deepen the connection between struggle around immediate issues and systemic analysis. The critical distinction is to begin from people’s needs, rather than limiting ourselves to what is possible within capitalism; arguably this is the meaning of a revolutionary approach. 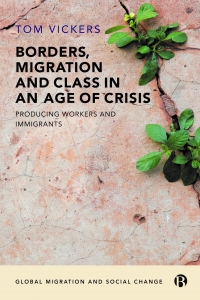 Borders, Migration and Class in an Age of Crisis, by Tom Vickers is available on the Bristol University Press website. Order here for £60.00 or get the EPUB for £21.59.