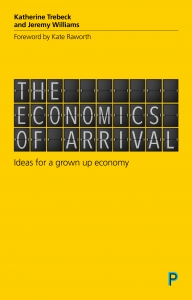 In their ground-breaking book, The Economics of Arrival, Katherine Trebeck and Jeremy Williams argue that, although everyday economics tells us there is no such thing as enough growth, we have, in fact, ‘arrived’. Economic growth has already brought unrivalled prosperity for GDP-rich countries; we have enough.

The challenge is now to make ourselves at home with this prosperity, to ensure we all enjoy the fruits of growth before they rot, through debt, inequality, climate change and fractured politics.

If growth is an inadequate goal, what should we be pursuing instead? There are many forms of progress, for both countries that have arrived and countries who are not there yet.

It’s important to underline the fact that growth still matters in our thinking. Growth makes arrival possible, but context is everything. Wherever people don’t have enough for a good standard of living, growth can be vital – as long as it’s shared and put to good use. But once diminishing marginal returns set in, it’s not clear what more growth is for; its work is done.

We use a variety of metaphors for this in the book. We talk about the economy being grown up, like a mature tree reaching its full and rightful size. We talk about building a house, and how growth is like the bricks and concrete that provides the structure of the house, but not the warmth and welcome of the home. In the same way, we rely on growth at the earlier stages of development to provide the resources, income, infrastructure and materials to provide a good life for everyone. Growth gives us the foundations on which to build a lasting home – but you don’t live in the foundations.

What comes afterwards is going to be a more qualitative form of progress, and the book explores a number of different avenues for progress after growth. Here are some of them:

Predistribution: progressive governments can find themselves spending a lot of energy trying to fix inequality through redistribution. They have to capture a share of wealth through taxes, and then pass it on to those on lower incomes through services and benefits. It’s bureaucratic, often divisive, and it would be a whole lot easier if the economy didn’t create the inequality in the first place. The alternative is sometimes called ‘predistribution’, and it’s an important theme for us. We advocate a more inclusive economy from the start, by using employee owned businesses, community energy, local transport co-ops and so on, so that more people have a stake in the economy and it becomes more democratic.

Participative democracy: a feeling of agency is important to human mental health. Feeling powerless and out of control is detrimental to our wellbeing, and so reinvigorating democracy would be a good way to improve people’s lives. It might also help to prevent the slow slide towards extremism that we see in a number of countries. People feel that they aren’t listened to, that politicians don’t have their interests at heart. Through participative budgeting, auditing or planning, people would feel that they have a voice as well as a vote.

Leisure time: In the 1950s it was often assumed that the technological breakthroughs would replace a lot of human labour. People would work a three day week and spend their time on leisure, art, sport or volunteering. It hasn’t worked out that way, but the option is still there. Many people reach a point in their career where they realise that an extra day off would be worth more to them than a pay rise, and they go part time. What if we had a national version of that, and chose to enjoy our wealth as time rather than production? It would need to be done in a way that didn’t force anyone, or leave anyone poorer, but the benefits to our health, happiness and freedom would be considerable.

Good work: many employed people spend a big chunk their waking lives at work, so whether or not you enjoy your job really impacts overall sense of personal wellbeing. And unfortunately, 60% of people in Britain and America report that they are unhappy at work. Hours are long and the work may be unrewarding, or meaningless. More leisure time would help – see above – but there have to be ways to make work itself better too. There is plenty of research that shows that people are more engaged in employee-owned businesses. They feel that they are valued and have a stake, and so we talk a lot in the book about alternative business models that would deliver good work, ‘pre-distribute’ wealth and address inequality.

Those are just a few examples. We could also look at the circular economy, public affluence, commons thinking, a deeper materialism that values what we own through repair and craft, or how consumerism could be supplanted by a more healthy ‘experientialism’.

The message of The Economics of Arrival is predominantly aimed at richer countries. They’re the ones that are overconsuming, and where failure demand and diminishing marginal returns are most obvious. But we think the idea is relevant to developing countries too. It’s almost a warning – you don’t have to go this way.

Imagine two people out walking in the countryside. They are heading towards the summit of a hill. One of them – let’s call him Wesley – has eaten a hearty breakfast and he’s got sturdy boots and walking poles. Wesley strides ahead, carrying most of their shared provisions in his backpack. He walks up the hill to their destination, but once there, he decides that the hill isn’t as high as he’d like. Instead enjoying the sense of accomplishment, he starts gathering stones and piling them up on the summit.

From the top of the hill Wesley notices an easier, alternative path to the top than the one he took. This path is less rocky and has fewer of the nettles and brambles that stung and snagged him on the way up. If he’d taken that less arduous path, he wouldn’t have been so hungry and thirsty – and he might have left more of the water and the snacks for his companion who still needs to make the climb. That gentler path even has a bridge over the ravine that Wesley had to scramble through.

Wesley’s companion has seen glimpses of this path along the way and suspects another route might be possible. But the one Wesley strode so assertively is the one highlighted on the map, and the bootprints of previous walkers all lead this way. From the summit, Wesley keeps shouting down to say that having gone on ahead, he can categorically say that there’s only one certain path to the top.

This is where we find ourselves – GDP-rich countries are in Wesley’s position. They refuse to acknowledge that they have arrived; they have consumed more of the collective resources; they have harmed themselves along the way; and yet they insist (through textbooks, international agreements, and official ‘advice’) that their route is the only one. Countries that have not yet arrived are being compelled to follow the arduous path – yet many of them know there is a different, gentler route.

For developed countries, the task before us is to undo past mistakes through retrofitting– we have to wind up coal power, electrify trains that we once chose to run on diesel, stop throwing so much stuff away, and redress systemic inequalities. We have to break our lock-in to uneconomic growth. Less developed countries can learn from this and do choose cleaner and fairer ways of doing things that won’t need to be undone later.  They can develop a circular economy first time around, avoiding the take-make-waste processes that have left richer economies littered and depleted of resources. Institutions can be built with a deliberative and participative ethic right from the start, rather than bolting it back on after other approaches have failed. There are many ways to circumvent, tunnel under or teleport past the bad ideas of the richest countries, and to choose a path that is gentler on the planet and places less strain on people.

Perhaps most importantly, countries that have not yet arrived could explicitly position the wellbeing of their citizens and the planet as their first priority and utilise growth to serve that goal, rather than following wealthier countries in the pursuit of growth at all costs and as an end in itself – a pursuit that led to rushing past the point of arrival and into the era of over development and uneconomic growth.

Both for those who have arrived and those still choosing their path, ending the relentless pursuit of growth doesn’t mean a mediocre stasis maintained in perpetuity. There will be new technologies, new ideas, new art and culture, and many new ways to improve people’s lives and regenerate the environment. We just need to stop and admire the view.

Based on original articles published in The Earthbound Report.

See also: Making ourselves at home in an economy that has enough and Podcast: Futures of Economics.

The Economics of Arrival by Katherine Trebeck and Jeremy Williams is available on the Policy Press website. Order here for £11.99.