Creativity depends on mess and disruption – but where does that leave us?

In Social Innovation: How Societies Find Power to Change, out later this month, Geoff Mulgan explains how the phenomena provides answers to the most pressing global, social, economic and sustainability problems.

In this extract from the book he describes why society needs both disruptors and cleaners to make social innovation happen. This idea plays out in social inequality, human activity and the disruption that is playing an increasing role in US and UK politics, often by those who have always had someone to clean up after them.

“When I was a teenager, I worked every holiday for an agency that sent me to clean people’s homes. The money wasn’t great, but it was convenient, and the work was satisfying: a job where you can easily see that you’ve done well and how you’ve made a difference.

Later I did many other similar jobs – cleaning out sample dishes in a hospital, cleaning the kitchens of a big hotel in London’s West End and cleaning factory floors. This work coloured my world-view more than I realised, for it sometimes made me see the world as divided into two groups: on the one side, the people who make mess, and, on the other, the people who clean it up.

A huge amount of human activity is essentially about maintenance: keeping places clean and tidy; maintaining parks, forests and agricultural fields; maintaining human bodies, especially those of children and the elderly; and sometimes maintaining minds. This is always less respected work. It tends to be repetitive. Some of it can be automated, but surprisingly little has been so far. We all depend on it.

Why does this matter to me now? I work in the field of innovation, where creativity depends on making a mess, and sometimes disrupting things. It feeds off disorder and making lateral or random connections. That’s why the conventional wisdoms about creativity are so at odds with what I had to do as a cleaner. They promote throwing things up in the air, hacking, messing, mashing up. In what’s become a classic phrase for the digital economy, they encourage people to ‘move fast and break things’.

These ideas seem to have spread over into politics. Donald Trump has been happy to ride roughshod over norms and constitutional principles, happy to smash them if that’s what it takes to get his way. The Johnson government has sometimes been portrayed as acting in a similar spirit – moving fast and breaking things.  He’s thrown many leading lights out his party; appears relaxed about the break up of  the UK, the reunification of Ireland; and threatening constitutional crises of various kinds.  All that matters is getting to his goal.  A prospective Labour government might be equally at ease with levels of disruption that might have been unthinkable a decade ago.

So how should we think about the tech world’s love of disruption? If you live in overly ordered, hierarchical and predictable societies these ideas can be exhilarating, a liberating escape from restraint. But I sometimes wonder whether these cult phrases of modern tech are parodies of the world-view of people who have never cleaned up, the pampered elites of North America, Europe and Asia who always had someone else to clean up after them. They’ve happily disrupted dozens of industries and also inadvertently left behind a tsunami of thrown-away gadgets and an ocean of messed-up data (the dark side of Moore’s Law is a disturbingly steady growth in e-waste that is simply buried in the ground as people discard last year’s iPhone or laptop).

But just imagine for a moment that the whole tech industry had been dominated by people who hadn’t had such upbringings and who longed for neatness. It’s not so hard to imagine, because engineering and other fields are steadily embedding the very different idea of a circular economy that has become, perhaps, the natural home for people who clear up their own mess – the idea of an economy and society where everything is collected and reused (there are also plenty of people in the digital world who value elegance, economy and neat code).

These two ideas now sit in an interesting opposition. On the one hand, many idolise the digital disrupters, the people who mess things up. These (nearly all) men are now some of the world’s richest people, the new aristocracy of the 21st century, and they have had a visible influence on the tone of politics.

On the other hand, many think the world has far too much disruption, mess and waste, and long for an economy that is aware of limits, and responsible for its own actions.

We probably need them both, and to be able to cultivate both mindsets simultaneously. Perhaps what we should be wary of are people who adhere to only one – the disrupters who see that as an adequate world-view, and people who cling too tightly to order over imagination.

I was once told that Ernst Schumacher, the author of Small is Beautiful, had commented that in a world dominated by small institutions he would have written a book called ‘Big is Beautiful’. What mattered was to get the balance right. The same is true of disruption and order. But my guess is that the world would be a better place if its rulers, just occasionally, had to tidy up after themselves.” 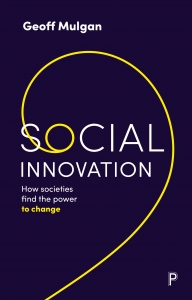