Migration and the politics of life and death

Following the tragedy in Essex last month, where 39 people were found in a lorry container, Alice Bloch, Professor of Sociology at the University of Manchester, examines the complex issue of migration.

Migration is not a new phenomena and nor are the immigration polices that try and restrict migration or those that make the lives of migrants increasingly marginalised and precarious.

The rationale for restricting migration has been stated and restated by different governments but the message is often a variation of a narrow theme; migration is something to be controlled, the right sort of migration is to be encouraged (that is the migration of the highly skilled and/or rich) but the wrong sort is to be prevented, especially when it is irregular. The relationship between restrictive policies and irregular migration routes are well documented, as are the use of agents and smugglers paid and hired to plan and execute the journey.

The reasons for migration are complex and varied and can involve a combination of social, economic and/or political factors. It is not the world’s most impoverished that migrate, even in an irregular way, because making the journey can be expensive and can form part of a collective household livelihood strategy where money is pooled and expectations and obligations are high. Where people are compelled to move because they are seeking asylum or because they lack livelihood opportunities they will try to find ways and for some this means taking risks. Getting onto boats not fit for purpose, being locked in the back of a lorry, navigating mountain or desert terrains and all the while paying exorbitant prices.

In our book, Living on the Margins: Undocumented migrants in a global city published by Policy Press in 2016, Sonia McKay and I explored motives for migration and the journeys that different undocumented make to reach the UK. These journeys could range from paying an agent to organise a visa and a direct flight to lengthy transits to terrifying and physically demanding journeys on foot. One interviewee, a woman from China, arrived in the UK in 2006 having paid around £12,000 for a journey that took over a year and included climbing mountains, walking at night to be more hidden and a year in transit, as she describes in the following way:

We stayed in Moscow for a year. The snakeheads gave us food. We ate just one or two potatoes a meal…We travelled into the UK from France.  We had no passport or visa. We were inside the back of a lorry. We didn’t come out until we were left at some place in [the English] countryside (2016: 61).

The numbers who die making clandestine journeys are unknown but estimates from the International Organization for Migration suggest that more that 34,000 migrants have died making journeys since it began collecting data in 2014, of which nearly 18,000 people have died trying to cross the Mediterranean. Increasingly people are emotionally anesthetized to news items reporting the death of migrant people, and deaths often remains unreported, although every now and then something happens that shocks. The deaths of 58 Chinese people, from suffocation in the back of a lorry, in 2000, the death from drowning of three year old Alan Kurdi from Syria in the Mediterranean in 2015 and most recently, in October 2019, the death of 39 people from Vietnam in the back of a refrigerated truck. Every day people migrate and every day people die. These deaths are state sanctioned deaths through a combination of action and inaction. The action through borders and bordering policies have led to increasingly perilous journeys and this coupled with state inaction such as the cessation of the Italian-led Mare Nostrum search and rescue operation in the Mediterranean are one of the ways in which states permit death.

The sovereign right to kill, an aspect of state power in modernity, links the politics of race to necropolitics[1]. It also forces the need to reflect on the difference between grievable lives and those that are ungrievable[2]. Grieving can take many forms and can be a private or a public act. Writing in 2015 Judith Butler observes how after 9/11 there was public grieving, led by the media where the images of and stories about the citizens that died became an important aspect of the nation. Absent from public grieving were the irregular migrants who also died but were not American subjects. While their absence clearly highlights the politics of life and death it also points to something subtle about those on the margins of society who need to stay hidden even in death, so their families and their work colleagues, who might also be undocumented, can be protected from the gaze of the state. Even in death, there is a hierarchy of grieving.

Migration is full of uncertainties. There are the hopes and fears that people travel with, the debts they might be saddled with and the abjection of everyday life in the country of settlement, particularly for those who are undocumented. The deaths of those making the journey will not stop until state sanctioned death, based on historic colonial notions of which lives are of value, changes to one where all life is equally grievable. 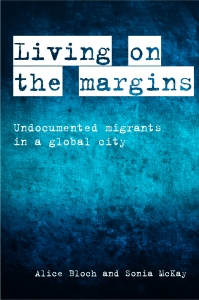 Living on the Margins by Alice Bloch and Sonia McKay is available on the Policy Press website. Order here for £20.79.