Crocodile tears: Why safe and legal migration routes are the only answer

In an effort to contribute to understanding following the Channel boat tragedy last week, we are offering the ebook of Unravelling Europe’s ‘Migration Crisis’: Journeys Over Land and Sea by Heaven Crawley, Franck Duvell, Katharine Jones, Simon McMahon and Nando Sigona free to download. This will be available until 23 December 2021. Add the EPUB version to your basket and use code CRAWLEY21.

Research has shown time and time again why people get into boats. If governments are serious about wanting to stop deaths at sea then they need to take an entirely different approach. That approach should start with the voices of migrants.

Last week  at least 27 people – men, women and children thought to be from the Kurdish regions of Iraq and Iran – drowned when their flimsy dinghy tipped over into the cold waters of the English Channel.

We will never know their stories.

We will never know how they came to the point where they felt they had no alternative other than to risk their lives and those of their children, including one that was yet to be born into the world.

But our MEDMIG research with 500 people crossing the Mediterranean in 2015 gives us a pretty good idea.

We know, for example, that people rarely travel directly to specific countries in Europe, including the UK. Instead, they often make separate journeys to different countries in an attempt to secure protection and a better life for themselves and their families. It is only when they cannot see a future that they decide to move on.

We also know that the countries where people eventually end up are often not fixed when they set out on their journeys. While there is a popular perception – promoted by politicians and the media – that people are ‘heading to Europe’ and come to countries like the UK for housing and benefits, the evidence tells us something quite different.

Research going back more than a decade shows that people rarely have detailed knowledge or understanding about what resources will be available to them when they arrive. This is confirmed by the Home Office’s own research, now buried deep in its archives. I suspect little has changed, except perhaps that the UK’s withdrawal from the Dublin Regulation because of Brexit means that smugglers are now telling people that they can’t be returned to other European countries if they get to the UK. Our research shows that smugglers often tell desperate people what they want to hear, and charge extra into the bargain.

Sadly, the response to the latest tragedy has been depressingly predictable.

First, there was shock and pity as people reacted to news of the largest mass drowning in the English Channel since records began.

But people like me who have been researching these issues for many years were not surprised to learn about the deaths. Neither was Home Secretary Priti Patel. This was a disaster waiting to happen. People have been drowning in the waters of Europe for decades, and the numbers have only increased as borders have tightened. International Organisation for Migration (IOM) estimates that more than 22,000 men, women and children have drowned since 2014. In 2021 alone, an estimated 1,588 people have died. They say ‘estimated’ for good reason: the real number dying can never be known and is probably much higher.

Then came the retributions and finger pointing.

But few have bothered to listen to the stories of those who make the journey across the English Channel as we did with those who crossed the Mediterranean. If they did, they would know that increased border controls are part of the problem, not the solution.

People only use smugglers when they are unable to enter a country legally. What few people realise is that it is virtually impossible to claim asylum without first entering a country through irregular means. There are huge inequalities in who has the right to travel without a visa. And there is no visa for claiming asylum.

If the British government is serious about taking action to prevent people from making dangerous journeys with the risk of drowning, then it must open up safe and legal migration channels. Simply putting up more and more barriers to stop people will not work. Buying fencing, CCTV and infrared detection technology or sending boats into the Channel to intercept desperate people does absolutely nothing to address these issues.

It is time for the policy approach to change to reflect the realities of what researchers, and the Home Office, know to be true. The first step is for politicians to acknowledge the failings of their own policies and engage migrants, stakeholders and the public in finding solutions that address the drivers of migration. Until they do, their policies will continue to line the pockets of the smugglers – and people will continue to drown. 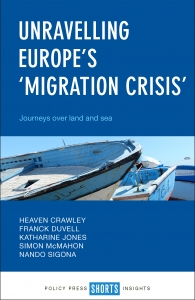 Unravelling Europe’s ‘Migration Crisis’ by Heaven Crawley, Franck Duvell, Katharine Jones, Simon McMahon and Nando Sigona is available on the Policy Press website as a free ebook until the 23 December 2021.  Add the EPUB version to your basket and use code CRAWLEY21.