Can the General Election put a stop to the housing crisis?

After decades of shortages of affordable housing, spiraling house prices and rents and lack of effective action on homelessness, how likely it is at that a Brexit dominated General Election will change anything?

The political storm over Brexit has given the impression that Brexit will be a game changer for the economy. If there is lower economic growth new house building will slow down and there will be less money from Government for social housing: if there is higher economic growth the opposite will be the case. But no-one really knows because the link between economic growth and sorting out the housing crisis is tenuous at best. The housing crisis is more a function of ideology and the power of the finance-housebuilding complex (see below) than the underlying economy. For example the Right to Buy council houses, or the Bedroom Tax or subsidies to volume house builders, or help for the homeless, are not in truth triggered by economic necessity.

Property commentators have spent thousands of column inches over the past months debating whether Brexit will have any effect on the economy, and it is not obvious that EU membership as such has any specific impact on town planning or housing policy. The EU does not fund housing programmes, although some new housing developments benefits from EU expenditure on infrastructure while town planning is shaped by EU environmental regulations. So there is some connection of housing policy with EU membership but not much.

We have already seen that political instability in the UK in 2016-2019 has little effect on the housing market with prices and rents continuing to rise and development being increasingly unaffordable in many part of the country. Housebuilders profits are up; land banking has continued as before; and Government subsidies to the housebuilders and landowners have continued. No housebuilders have gone bankrupt, indeed mergers talks have continued, for example the proposed £1bn merger between Bovis and Galliford Try. The fundamentals remain the same – a small number of mega builders, a shortage of supply, high prices, and a lack of social housing.

The finance-housebuilding complex, uniting landowners, the mega-builders, investors, and the Treasury, sails on ensuring that new housing supply is limited to keep up prices for investors. Thus, the housing crisis is a permanent fixture of the UK. And if there is an economic slow-down, housebuilding industry has shown that after short term set-backs, the housebuilders take this opportunity to buy up land and come out of recessions stronger than before. Brexit is an irrelevance.

One lesson from recent years is that if the profits of the volume housebuilders are threatened by recession or they are unable to meet Government new housing targets, the property lobby groups such as the Homebuilders Association, the Country Landowners Association and the RICS will blame everyone else (particularly the ‘planners’) but themselves. Already there are cases of the housebuilders using Brexit as a convenient excuse for not meeting the level of affordable housing set down in local authority plans.

But what if there is a change in Government? All parties are promising to spend a lot more money – but how much of this is going to housing. More important how much is going to social housing. The Labour Party has said that ‘by the end of first term’ it will build 100,000 council homes a year and 50,000 social homes through housing associations in England. The Labour conference in 2019 voted unanimously to scrap the Bedroom Tax and suspending the Right to Buy of affordable homes. In addition, the proposed Green New Deal will pour millions into the upgrade of existing homes. The Green Party has also pledged 100,000 council homes a year.

This is quite a pledge on new housing and it begs the key question – how will thousands of new homes be delivered? If it is by asking the volume housebuilders to do the building, this approach is doomed to failure. The volume builders are concerned with keeping up prices not increasing affordability or good design. If, on the other hand, Government steps in to buy land and launch a radical programme of public housebuilding by a re-energized and properly funded local government system it might have a chance of success.

The property market backers of the Conservatives are genuinely concerned about a Labour Government and will put up a ferocious fight against attempts to control land banking or tax land values. A couple of years ago the Government talked about a ‘broken housing market’ and their focus remains on getting new housing numbers up to 300,000 a year. Over the past three years the crude numbers have indeed gone up in England but the problem is that the Conservatives are concerned with numbers not affordability, nor meeting special housing needs, or quality low carbon design.

Whatever their sales pitch at Election time, you can expect the Conservative housing policy to be primarily about protecting home owners and investors and talking about helping first time buyers.  They don’t broadcast it, but they will also continue to give tax breaks to landowners and generous subsidies to the housebuilders. There seem terrified of providing significant support for social housing. The planning system will remain their scapegoat for the failures of the housebuilders to build.

The big picture under another Conservative government will be a continued housing and town planning crisis. Housebuilder and landowner profits will soar, social housing lobby groups such as Shelter and Crisis will try again to convince the Government to build social housing and hold down rents. Developers and landowners will settle into the familiar pattern of gaming the planning and housing system. This is not a happy prospect for those in housing need. But it does not have to be this way. 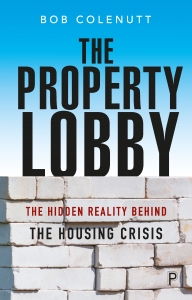 The Property Lobby by Bob Colenutt is available on the Bristol University Press website. Pre-order here for £13.59.