Why the Troubled Families Programme should trouble us all

The government argued that it wanted to ‘build on the success of the programme’, which was originally established in 2012 to ‘turn around’ the lives of 120,000 of the most ‘troubled’ families in England after the riots that took place in the summer of 2011. Barely a year later, and before any possible impact of the programme was known, the expansion of the programme to include a second phase, working with over 400,000 more families, was announced.

The new-found ‘success’ of the programme appears to be linked to improvements in three key areas, as identified in Building Resilient Families, the most recent annual report of the programme, published in March 2019. The programme has apparently helped to reduce: the proportion of children on the programme going into care by a third; the proportion of adults on the programme going to prison by a quarter and juvenile convictions reduced by 15 per cent, and; the number of people claiming Jobseekers Allowance by 10 per cent. Previous problems associated with the programme, such as the suppression of the first evaluation, the claims of a near-perfect success rate, and evidence of local authorities ‘gaming’ the Payment by Results mechanism were dismissed by the Local Government Chronicle as ‘a result of inevitable teething problems in implementing a bold new approach rather than fundamental flaws in concept and principle’.

This impact, along with the government’s assertion that the programme has a ‘proven track record of driving reforms across public services’ and has helped to ‘reduce the demand and dependency on costly, reactive key public services’ appear positive and should be welcomed. Unfortunately, scrutiny of these positive statements and developments rapidly and, almost inevitably for those familiar with the programme, turns to disappointment.

The convictions and custodial sentences similarly relate to very small numbers of families and there was no significant difference in the number of adult cautions or convictions, for example. The reduction of people claiming Jobseekers Allowance affected only around 10% of adults on the programme, and the results were not matched by any reduction in groups claiming Employment and Support Allowance or Income Support. This relative lack of impact on employment is despite a commitment by Sajid Javid in 2017 that the government would ‘scale up our efforts’ on the programme to tackle ‘worklessness’.

The most recent annual report also highlighted that the programme made little difference to people’s health, despite this also being a new focus of the second phase. The proportion of individuals on the programme reporting their own health as excellent or very good had not changed significantly and overall levels of wellbeing were also unchanged. Domestic violence was another new criterion that was introduced for the second phase of the programme but the annual report states that ‘there was no statistically significant change in overall levels of reported domestic abuse or violence.’ No progress on issues relating to alcohol or substance misuse is mentioned in the annual report and there was no clear pattern of improvement for school attendance, which has been a key issue for the government since the start of the programme.

Just over eight years after the start of the programme then, we are still waiting for evidence that it has or indeed can have any significant impact on most of the ‘complex inter-connected problems’ it has allegedly been tackling: school attendance; ‘worklessness’; crime and anti-social behaviour; domestic violence; children in need, and; health issues or limiting illnesses.

This should not be a surprise, however, as the evaluations of the family intervention projects which preceded the TFP were never quite as glowing as they have often been made out to be. Instead, we are told that the programme is helping to transform the way public services are delivered, albeit in a way that doesn’t necessarily lead to better outcomes for many people accessing these services.

The aspirations of the programme have shifted over the course of the last eight years, from ‘turning around’ the lives of families on the programme, through seeing them make ‘significant and sustained progress’ to ‘building resilient families’ and ‘driving reforms across public services’. If many ‘troubled families’ are still accessing foodbanks, still struggling in low-paid, poor quality jobs, still living in poor-quality housing, still not getting the mental health support they need, or continuing to experience domestic abuse, as many will be, should we really be celebrating the ‘success’ of a programme that primarily succeeds in making people feel more resilient about facing these issues?

Perhaps, instead, we should celebrate the resilience and perseverance of the families who put up with the shortcomings of the programme and with society’s inability to help address many of the issues they face. The majority of them manage to keep family life ticking over fairly well, all things considered, and many juggle jobs, illnesses or disabilities and caring for children or partners, without resorting to crime, or ASB, or relying on alcohol or drugs. But a society that claims such situations as a success to be built upon should trouble us all. 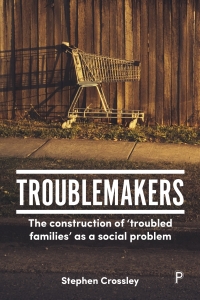 Troublemakers by Stephen Crossley is available on the Bristol University Press website. Order here for £20.79.