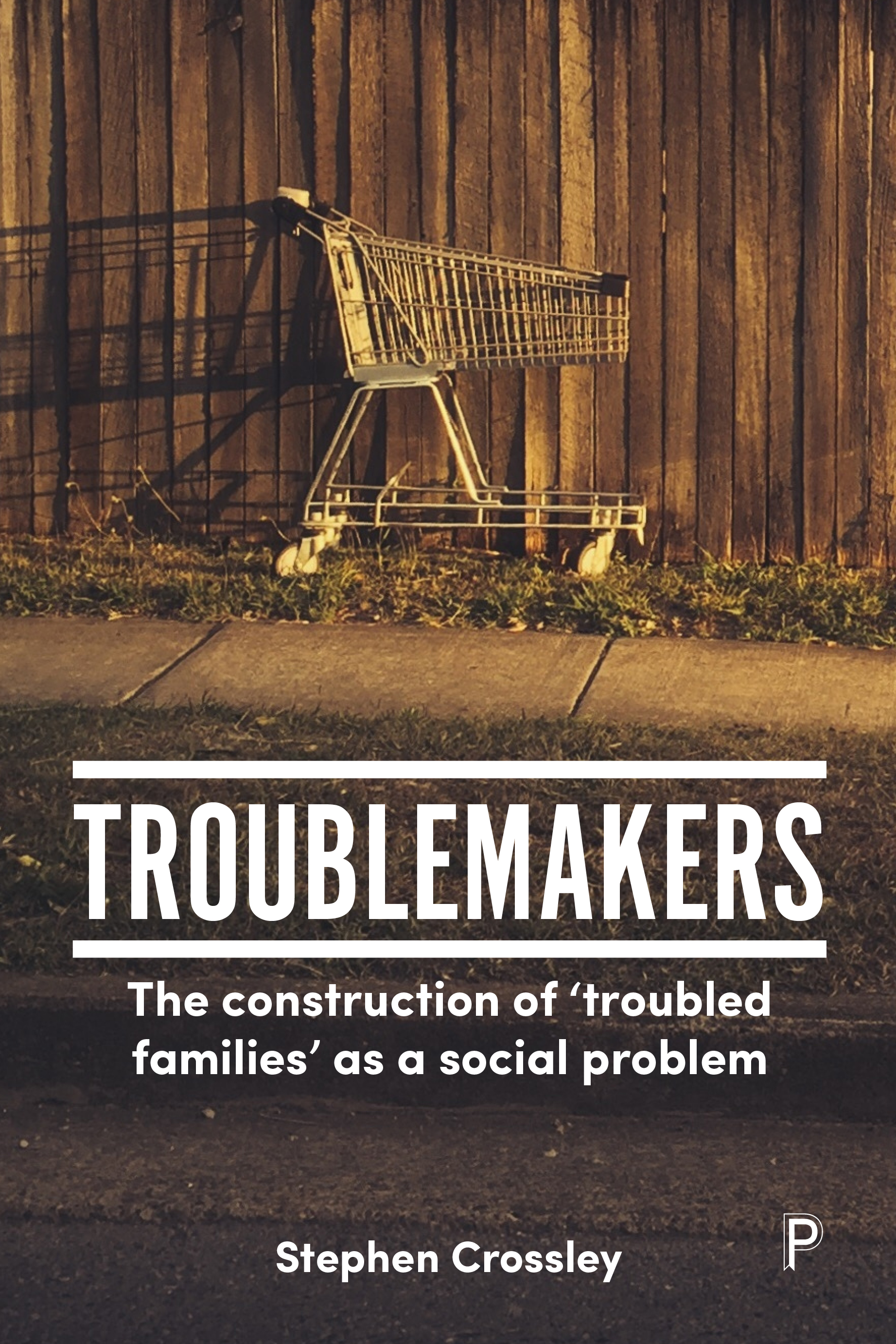 ‘Troublemakers’ is out now

Stephen Crossley, author of Troublemakers: The Construction of ‘Troubled Families’ as a Social Problem – out today – examines the most recent Troubled Families Programme Outcomes report, which published last week.

The Evolution of the Trouble Families Programme

The Troubled Families Programme (TFP), originally tasked with ‘turning around’ the lives of 120,000 ‘troubled families’ in a single term of parliament has evolved into a different type of programme since its inception, albeit one with many enduring features. The expanded criteria for the second phase of the TFP shifted from allegedly criminal, anti-social and ‘workless’ families, to include those experiencing troubles such as domestic violence and health issues.

The ‘next phase’ of the programme, announced in April 2017, sought to bring sharper focus to the work of the TFP by emphasising the need to support ‘workless’ families into employment. The criteria for identifying and prioritising families for the programme changed, the outcomes expected by the programme also shifted, but some core, sometimes unintentional, features of the programme remain, including the labelling of disadvantaged families as ‘troubled’.

Disproving the ‘underclass’ theory
The most recent findings, published on 27th March, highlight some continuities with previous ‘troubled families’ publications.

By way of example, we learn from the latest Outcomes report that:

The findings thus mirror two sets of evaluation data from the first phase of the programme (Final report on the family monitoring data and An interim report showing family monitoring data), and demonstrate that the stigmatising feckless, workshy, ‘neighbours from hell’ imagery associated with ‘troubled families’ courtesy of powerful individuals such as David Cameron, Eric Pickles and Louise Casey, is entirely inappropriate. Essentially, the official evaluation of the TFP is the latest in a long line of research that helps to disprove the longstanding theory of an ‘underclass’.

Changing nothing
The impact of the programme also continues to look problematic, considering this was a flagship social policy that was originally intended to ‘turn around’ the lives of ‘troubled families’ and change the way that the government intervened in their lives.

The impact study of the first phase of the programme was ‘unable to find consistent evidence’ that the programme ‘had any significant or systematic impact’ (p20). Since the renewed focus on tackling ‘worklessness’ was announced in April 2017, 104,809 families were worked with on the programme. Of these, just 4,807 families entered ‘continuous employment’ in the last year. In just under three years, not a single ‘troubled family’ in Newham (out of 2858 on the programme) has met the ‘continuous employment’ criteria according to the latest figures. And yet, over a slightly longer period, over 1000 families met this criteria in Liverpool. The difference between such figures (and there are plenty of other inconsistencies) is not explained.

The main finding in the Outcomes report is that a significantly smaller proportion of children were classed as children in need (a 3.9 percentage point difference, a statistically significant difference) after 6-12 months of work under the TFP, than similar families in a matched comparison groups who were not on the programme over a similar period. This improvement is to be welcomed, but given the resources allegedly attached to the TFP, the intensive, transformative approach, and the allegedly failing approach of other services, it hardly represents conclusive evidence that the family intervention model is worth the effort.

Deflection
The continuing focus on ‘families’ – either ‘troubled’ or ‘workless’ – and on the family intervention approach continues to deflect attention away from the quantity and quality of jobs on offer, and their suitability or otherwise for carers of young children and/or disabled or vulnerable adults. The potential consequences of poor, or insecure, or sporadic work on disadvantaged families’ lives remained undiscussed. Poor quality, poorly paid, irregular work, often at unsociable hours in the early morning or late at night, accompanied by potential or changes to benefits entitlements, does not always lead to less parental conflict, more support for ‘children in need’, or a greater, more sustainable income. The pejorative term ‘workless’ ignores the amount of domestic and caring work that takes place within ‘troubled families’, many of whom have young children and/or family members with health issues or disabilities.

Ideology not evidence
Despite the evidence that suggests a lack of impact in many areas, there also remains claims of the allegedly transformative aims of the TFP. As each phase of the programme has been announced, and as its profile and importance has dropped, there has been an increase in the extent to which the programme claims to be transforming and re-shaping local services. The most recent annual report claims that the programme ‘drives service reform’, ‘drives reduction in social care demand’ and ‘promotes social justice’. Problematic and/or slow progress of many families on the programme suggests that the family intervention approach might not be worth ‘rolling out’ and ‘mainstreaming’. The transformation of local services that the government claims is taking place under the TFP appears to be driven more by ideology than evidence.