Over the last year, the urgency of immediate action to prevent climate change has ascended social, personal and political agendas. Undoubtedly, one reason for this can be summed up as ‘The Greta Thunberg effect’.

In one year, since August 2016, this 16-year-old Swedish schoolgirl has inspired schoolchildren in five continents to be vocal in drawing attention to the climate catastrophe in process, to collaborate in school strikes and to demand that adults take meaningful political and personal actions to make real change. Many are well informed about the latest scientific thinking and are leading by example and campaigning against climate change inaction. Partly spurred on by these examples, the campaign group Extinction Rebellion has foregrounded climate change rebellion in ways that have guaranteed headlines in many countries.

The adults who have joined children in their climate demonstrations have blogged and tweeted messages that show they felt moved, impressed, passionately supportive, self-congratulatory and sometimes peeved that their longstanding efforts are now overshadowed by this new children’s movement.

It might seem that, at last, we are at a ’tipping point’ about climate change, where activism is beginning to make a real difference to political and social action. Yet, there is a crucial element in responses to climate change that receives very little attention. We still know very little about how ordinary families in different countries feel about environmental issues. This is what we aimed to find out in a study of environment in the lives of children and families in India and the UK.

It has been common for those concerned with climate change to explain that ‘we must all do our bit’ and that this entails households consuming less and recycling. Many politicians talk about children as responsible for teaching their parents since they ‘are the future’. In recent activism, some have turned to virtuous castigation of others for eating meat and travelling by plane. In turn, they have been admonished by those who point out that they are demonising others and so unhelpfully ostracising them—a charge dismissed by many at whom it is levelled, who sometimes repeat their charges with renewed sanctimony.

Yet, if there is to be meaningful change in environmental practices at all levels of society, it is not sufficient to point out, or regret, such divisions. Nor is it enough to wait for changes in institutions and from government or supra-national organisations. Since we do not only function as individuals, what we do as part of our everyday lives depend on our relationships and how we negotiate them in our households and families and as members of society. In order to understand the relationship between family lives and understandings and experiences of environment, we need to attend to the materiality of everyday lives and practices. If we are to understand why people do or do not commit to climate change activity, we need to understand the meanings of environment within everyday lives in families. That entails that we attend to family relationships, mundane family practices and understandings of, and about, meanings of environment.

Our study of India and the UK, published as Environment in the Lives of Children and Families, focused on diverse families from different economic, social and cultural backgrounds. They showed the complex ways in which environmental affordances, socio-economic resources and opportunities shape understandings and practices in embodied and emotional ways. Some families engaged in environmentally protective practices only because the context in which they were living made it both possible and a legal requirement. Others expressed concern about climate change but justified high carbon practices in terms of its centrality to their family lives, comfort and experience. For example, multiple car ownership was considered essential for taking children to schools and adults to work, shopping and leisure. Air conditioning was viewed as central to care for children or elders.

Long-haul flights were sometimes taken reluctantly but viewed as central to work. All these practices could be engaged within an identity position of environmental responsibility and responsible privilege. It was often easier to frame other people’s environmental practices as morally blameworthy and to disparage environmentally ignorant or apathetic others.

For some families, everyday life was deeply patterned by their everyday environments in ways that showed how environmental practices are rooted in the materiality of quotidian practices and differentiated by social class, caste, affluence, gender and location. For others, who had the socioeconomic resources to control their immediate environments, environmental practices are mundane. Families living within relative proximity could live in areas with different environmental security so that some were exposed, for example, to greater risk of flooding and less reliable water supplies than other families in geographic proximity. Socio-economic positioning, the land and government policies all contributed to creating or mitigating environmental risks and protection for families. Some families in both countries lived in such poverty that they considered environmental issues beyond their concerns for managing everyday life. It is increasingly recognised that climate change justice requires recognition that people in some parts of the world need to consume more in order to reach basic levels of ease and comfort. This is also the case for some families within affluent countries.

A further finding was that some members of families did not believe that climate change is anthropogenic, while others considered that responsibility for action to lie with multinationals and governments, rather than the minor things families could do. Parents and children could have very different views about climate change. So, while children are currently at the forefront of environmental activism, some parents considered their views more important than those of their children.

Our findings show that, in part, shifting environmental practices requires understanding of family lives and of the perspectives of children and parents positioned in very different ways within and across countries.

Ecocide: the most significant crime of the 21st century
How do we make sense of climate change?
Crossing the seas for climate change 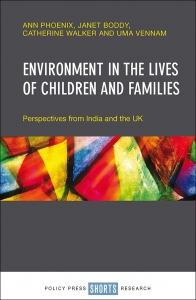 Environment in the Lives of Children and Families: Perspectives from India and the UK by Ann Phoenix, Janet Boddy, Catherine Walker and Uma Vennam is available Open Access under CC-BY licence. Download via OAPEN here.