Ecocide: the most significant crime of the 21st century

Today there is too much hot air amongst our political leaders and not enough action. Climate disruption is tearing the planet apart in ways that have been entirely predicted, yet for which we remain basically unprepared.

Climate change continues to be the most significant and urgent matter of our time.

Global warming is not ‘natural’. It is human made. The resultant climate change is distorting what used to be the familiar patterns of weather.

Rises in global average temperatures do not translate into uniform warming. Rather, they trigger a whole series of changes in existing weather patterns, for example, bringing into the equation excessive precipitation in some parts of the world, extreme drought in others. Climate change disrupts normal weather patterns in various and unexpected ways.

All of this is entirely due to the continued collusion of national and state/provincial leaders with the fossil fuel industries and other degraders of the environment.

Yet even in the face of these contemporary changes, the Earth continues to be a battleground where plunder of resources and pollution of the planet is rampant and inexorably moving all toward an even more radically altered ecological state.

Our most prominent world leaders are mad, and bad, and they’ve taken the world with them. They are diminishing emission controls and environmental protections, burning forests and fracking oils, and actively encouraging violence against Indigenous peoples and local farmers.

Environmental harm on this scale demands responses, large and small, that address such eco-injustice. Preventing ecocide means resisting and transforming the status quo. Time and space for business as usual must be diminished if social and ecological justice is to be achieved – and basic survival ensured.

Student strikes, consumer boycotts, and mass protest must be the lingua franca of ecological politics from now on. We need to grow Greta Thunberg a thousand-fold, to multiply Extinction Rebellion a hundred-fold. We need debate about the future, robust argument about the present. We need transformative action now.

It is environmental activists who are called terrorists when resistance emerges from below. But the real criminality lies elsewhere.

Ecocide is the most significant crime of the twenty-first century – the systematic destruction and degradation of environments at the planetary level.

For example, global warming is accelerated by the activities of governments, corporations and individuals that rely upon or involve pumping greenhouse gases into the atmosphere. It is also fostered by the failure of governments to regulate carbon emissions, for example, letting the dirty industries continue to do what they do best – which is to continue to profit from irresponsible and destructive behaviours.

Crime involves serious harm. Activities may be deemed to be malum prohibitum (harmful because of regulation) or malum in se (harmful in themselves).

The roasting and freezing of the planet due to climate disruption ought to be considered serious in itself – and certainly serious enough to warrant criminal laws and criminal prosecutions for those most contributing to the problem.

We have had ideas about the ‘greenhouse gas effect’ for well over a century. There has been public knowledge about the negative impacts of climate change since the United Nations Rio Summit in 1992. Thus, the problem and its consequences have been known for decades.

The perils of climate disruption require that we disrupt the activities that contribute to the problem. This means stopping the causes before they become consequences. This means marshalling resources to mitigate the harms and victimisation affecting humans, ecosystems, non-human animals and plants everywhere.

The carbon criminals are those who pretend that climate change is not happening or who believe that climate policy should not take precedence over immediate economic gain. Many are contrarians – eschewing scientific evidence in favour of bias and ill-informed opinion. Nothing will convince them otherwise because their specific sectoral interests override universal human and ecological interests.

The carbon criminals are those who continue to facilitate carbon emissions: governments that foster deforestation and massive oil, gas and coal projects; corporations that construe energy policy as fundamentally about fossil fuels not alternative sources – these are the purveyors of future costs that already cruelling us in the here and now.

The carbon criminals are those who fail to prevent and stop the activities and policies that are killing the planet and life as we know it. Delayed action is in effect a green light to even greater climate disruption happening at an even greater pace.

Failure to act, now, can only be described as criminal. 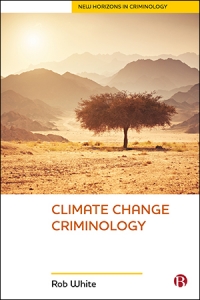 Climate Change Criminology, by Rob White is available on the Policy Press website. Order here for £48 or get the EPUB for £17.59.