How do we make sense of climate change?

With climate change once again making headlines around the world, and the global climate strike this Friday, how do we, as ordinary people, make sense of what’s happening and why does this matter?

Kristina Diprose, one of the authors of Climate Change, Consumption and Intergenerational Justice: Lived Experiences in China, Uganda and the UK has examined, along with co-authors Gill Valentine, Robert Vanderbeck, Chen Liu and Katie McQuaid,  public perceptions of climate change in three very different cities. They reveal that our engagement and willingness to act against climate change depends on our personal relationship, shaped by culture and experience, with the natural world.

From the rainforest fires raging in the Amazon to a memorial service marking the first of Iceland’s glaciers to be lost, climate change is once again making headlines this summer. September’s planned week of climate action aims to put further spotlight on the global environmental crisis and – building on the momentum of the Youth Strike 4 Climate movement – to pressure governments to take urgent action in line with climate science and justice.

As activists and the world’s media draw attention to the global scale of the crisis and the enormity of the challenge ahead of us, how do ordinary people make sense of what’s happening? How do they go about their everyday lives with the knowledge and the threat of a changing climate?

For three years, I was part of a research team looking at people’s lived experiences of climate change in China, Uganda and the UK. We interviewed over 400 residents from the ages of 16 to 96 in the cities of Nanjing, Jinja and Sheffield, conducted a survey of 2,250, and organised intergenerational workshops where people could express their concerns imaginatively through community theatre and creative writing.

As a researcher who works predominantly in the UK and previously with young environmental activists, being part of this cross-national, cross-generational programme was a wake-up call. It taught me that we cannot underestimate the influence of our personal relationship to climate on the general public’s engagement with climate change and willingness to act. What we call ‘climate change’ is, on the one hand, a planetary phenomenon that can be observed, measured and modelled within the natural sciences. On the other, it is about how we understand our relationship with and responsibility to the natural world, a process that is heavily mediated by culture, experience, and the everyday environments where we live and work.

Our research found that in China and the UK, people are mostly familiar with and influenced by the climate change stories that dominate international news media – stories that largely focus on scientific evidence and global ecological disaster. The phrase conjures up images of melting polar ice caps, rising seas, and multinational industries polluting the atmosphere. People are worried about these changes, of course, but they also think the problem is well beyond their sphere of influence.

Harriet*, in her early 30s and from Sheffield, described herself as “sceptical” of “what the media says about the environment”. She explained that she believes the stories about what is happening, but is unconvinced by claims that living a greener lifestyle can help: “taking it to that next level of how you could really make a difference, it’s that that I don’t really, definitely know, and also probably just push to the side of my mind.” In common with the majority of residents in Sheffield and Nanjing, she felt that it is the responsibility of power elites – governments, multinationals and experts – to take action on climate change.

Conversely, in Jinja in Uganda, fewer residents were familiar with the scientific evidence and arguments for global action on climate change. Nonetheless, it was an issue that local people were very concerned about, not least because my colleagues’ fieldwork there in 2015 and 2016 coincided with droughts that caused crop failure, food scarcity and rising prices, exacerbating the already precarious living conditions of Jinja’s urban poor. When Jinja’s residents talked about climate change, they tended to focus on environmental and social changes in the fabric of their lives – for example, how the droughts were caused by tree-cutting and younger generations’ attempts to eke out a living in the new cash economy.

When asked about the environmental changes she has seen in her lifetime, Agatha, in her early 80s, observed that “in the sixties people were more humane, compassionate and friendly and we could talk to each other like a family and even the weather had not changed.” This highlights a distinctive cultural understanding of climate change as comprising local changes in the weather, the natural and built environment, and, crucially, everyday moralities and social practices.

The most striking finding from our research was that far more residents in Jinja felt that they and their communities have a major role to play in protecting the environment than those in Nanjing and Sheffield. This at first seems counter-intuitive: we know that the carbon footprint of the average Chinese or UK citizen dwarfs that of the average Ugandan, and we also know the role that the former nations have played in past and present resource exploitation. It makes sense, however, when we consider the human sense of climate that informs this view. When climate change is framed as a huge, complex global problem and people see it in this way, they become overwhelmed and feel powerless to act. When people believe climate change concerns the way they live, they are far more willing to take action.

On top of this, residents in Sheffield, and to some extent in Nanjing, can afford to push the problem aside because the places they live have the infrastructure and capacity to cope – at least for now. Older Sheffield residents were hopeful that environmental problems can be solved, because they have seen the former Steel City become much cleaner and greener in living memory. Nanjing’s residents likewise cited the pace of change in their city as a reason to be confident that China’s environmental problems will ease in the not-too-distant future. Fu, in his early 50s, ventured: “I suggest we should be optimistic. We are all well aware of the Chinese Government’s will to implement changes. It can do a lot of things in a short time”.

These findings raise profound questions of climate justice, suggesting that citizens of more affluent cities and nations are complacent about climate change because they think the problem is too big, and because they perceive that the worst effects will be felt elsewhere. Meanwhile, the least polluting and most immediately vulnerable group of residents in Jinja hold themselves accountable for the changes they are experiencing.

The human sense of climate matters. It is important to find ways of sharing knowledge and lived experiences of what is happening, and of persuading citizens of more polluting nations that their voices are needed to hold those in power to account. 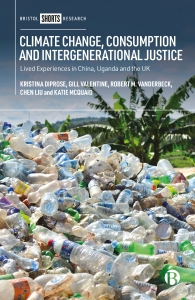 Climate Change, Consumption and Intergenerational Justice, by Kristina Diprose, Gill Valentine, Robert Vanderbeck, Chen Liu and Katie McQuaid is available on the Policy Press website. Order here for £36 or get the EPUB for £7.99.

*Pseudonyms are used in this article.