Unexpected bills can be a challenge for any household, but particularly for low-income families relying on social security payments. When the unexpected bill is a debt owed to the government, resulting from the overpayment of income-tested benefits, families may feel they cannot challenge its legitimacy.

The principle that people receiving government payments should accurately report their incomes and circumstances is widely supported, as is the principle that governments should act responsibly in providing social security support. But what if overpayments of benefits and therefore the creation of debts are the result of specific choices about the ways in which government policies have been designed? Or what if the government raises a debt with insufficient evidence that an overpayment has actually occurred?

In our recent article in The Journal of Poverty and Social Justice, winner of the 2019 Best Paper Prize of the Foundation for International Studies on Social Security (FISS), we look at four case studies in which governments in the UK and Australia created overpayments and debts following the redesign of benefits.

Our first two cases date back about 20 years. In July 2000, the Australian government introduced major changes to the tax and benefit system, including providing a wider range of payment choices. Under the new system, many families were required to estimate their taxable income for the next financial year in advance. There was an end-of-year reconciliation for all families when payments received were assessed against what ought to have been paid. If actual income turned out to be more than had been estimated, there was an overpayment and a debt.

In the final year of the old system, there had been about 52,000 families with debts at the end of the year. After the introduction of the new system, an estimated 670,000 families were overpaid – more than 12 times as many as the previous year. Overall, around one-third of eligible families incurred an overpayment in the first two years of the new system.

At around the same time, the UK was designing and introducing a new system of tax credits for people in work and for families with children. The assessment for these was initially made on the basis of gross family income in the previous tax year. If recipients reported changes during the year, then the award was adjusted, and at the end of the year total credits and income were reconciled. But many changes in income and circumstances went unreported during the year and so, in practice, considerable adjustment was required. Over the first few years of the system, about 1.9 million cases of overpayments occurred each year.

Australia based the initial assessment on prospective income while the UK based the initial assessment on retrospective income. In both countries these estimates were often a poor guide to actual income in the year, not least as many people had changes in income and circumstances during the year. There was significant concern in both countries about hardship and much negative media coverage. The Australian government responded by introducing a new end-of year lump sum that reduced the overpayments. The UK government responded with an increase in the annual income “disregard”, with increases in income below £25,000 ignored. So both governments made the decision that these overpayments were not actual debts to be repaid, but could be waived or reduced by other changes to the rules.

More recently the issue of how benefit systems can create debts has reappeared in both countries. The roll-out of Universal Credit has proved to be very challenging. One of the many issues that has emerged is the extent of deductions from awards to repay old and more recent overpayments and other debts. There are currently just over two million people receiving Universal Credit, and approximately three-quarters of a million have already had deductions from their awards for the repayment of non-Universal Credit debt. The majority of this refers to the recovery of tax credit overpayments. This figure will increase significantly as more claimants come into the system.

The five week wait built into the design of Universal Credit is another source of debt. Over half of Universal Credit recipients have deductions to pay back to the department for advance loans, taken out at the start to cover that waiting period. Deductions can also be made for other benefit overpayments, for housing arrears, and for some third-party debts. The adequacy of Universal Credit is challenged by the extent of these deductions and the system seems relatively inflexible in dealing with these, not least as automated decisions are made.

Our final example from Australia also relates to the time period for assessing entitlements and to the more extensive use of automated systems. In July 2016 a new online system was introduced for raising and recovering debts. This matches the earnings recorded on a customer’s benefit record with historical income data from the tax office. Customers are asked to confirm or update their income using the online system. If the customer does not engage with the department either online or in person, or if there are gaps in the information provided by the customer, the system will automatically fill the gaps with a fortnightly income figure derived from the tax office data for annual incomes (‘averaged’ data).

However, the algorithm used to fill gaps will produce many false estimates of debts by dividing the annual wages reported by 26. This approach will only work correctly if individuals received exactly the same income each fortnight. People who move between different jobs, or who have short interruptions to work, or who move from welfare to work are most exposed to having debts miscalculated.

The Federal Court of Victoria has recently ruled that income averaging is unlawful, and the government will have to pay some people back, with a large potential budgetary cost.

These examples are the result of specific policy choices made in the design of benefit systems, alongside the greater use of automation. Getting payments ’right‘  in any means-tested system is a complex process necessarily involving trade-offs between responsiveness and simplicity. Choices must be made. In both the UK and Australia trends towards more insecure and variable employment patterns – and hence irregular pay packets – will make balancing accuracy and timeliness in means-tested benefits more difficult. The assumption of regular and unchanging income no longer holds, and this new reality requires a policy, not a technical, solution.

Jane Millar and Peter Whiteford (2019) Timing it right or timing it wrong: how should income-tested benefits deal with changes in circumstances? is the winner of the 2019 Best Paper Prize of the Foundation for International Studies on Social Security (FISS) and just published in the new issue Journal of Poverty and Social Justice. And see also Peter Whiteford, Michael Mendelson and Jane Millar (2003) Tax credits and how to respond to income changes, Joseph Rowntree Foundation 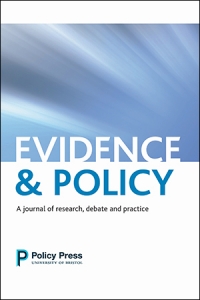