What is the sociology of debt?

In a world marked by political and economic uncertainty, debt appears to be a constant, an enormous dark cloud weighing upon our lives. We are always in debt, struggling to make ends meet, maintain repayments, and balance the books. In the wake of financial crash of 2008 debt was big news and many imagined the end of capitalism itself.

Although the idea of revolutionary economic transformation may have faded from the popular imagination, the problem of the crushing weight of debt remains. Perhaps we have normalised this crippling state of indebtedness, come to terms with it, and imagine that we will always live in ‘the red’? Is there any way to live in ‘the black’ today?

There is a school of economic thought, Keynesianism, that makes the argument that indebtedness in itself is not the problem. According to this view, we can endlessly push repayment off into the future in the name of social development. However, the problem with indebtedness today is that it is largely unsustainable because it is not concerned with supporting social progress and the development of societies that can support individuals, families, and communities moving into the future. Instead, the current state of indebtedness is a symptom of a global social and economic system – global capitalism – which makes the individual the centre of everything, regards vast socio-economic inequality as the effect of a kind of economic state of nature where the only law is the law of the survival of the fittest, and ignores what we might call the proper, sociological, understanding of debt.

What is the proper, sociological understanding of debt? Simply put, we are always indebted to those around us who make our lives possible, those who came before us who brought us into the world, and owe a reciprocal debt to those who will come after us and must live in the future that we leave to them. This is the sociology of debt because it emphasises the basic relationality of people, the basic truth that we rely upon each other to live, and foregrounds the condition of indebtedness inherent within every society. It is this basic indebtedness that the financial idea of indebtedness forgets when it suggests that it is somehow possible to escape debt, that repayment in full is somehow possible, and that we can ever live in the black. According to the sociological understanding of debt there is no living in the black, there is no relationship between creditors who are somehow beyond debt and debtors who are up to their eyes in it, because debt is universal. Nobody lives outside of a social relation with others. There is no outside to the responsibility for others.

In my view, the point of the sociology of debt is, therefore, to imagine two forms of indebtedness. In capitalist societies we are very well aware of monetary or financial debt. We know about the problem of financial debt today. This is well documented. According to the IMF global debt is currently running at 225% of GDP, which is worse than before the global financial crash of 2008. In the UK household debt rose to 133% of income in 2019. Despite high levels of employment, the British are still in debt. In fact they are in more debt than they were in the period leading up to the crash. Why is this the case?

Before the crash of 2008, increases in debt were largely explained by over-leveraging and over-consumption in a bubble economy. We wanted to consume more. Everybody wanted a piece of the consumer capitalist good life and it was thought that this was possible. In this respect there was a vision of universal development hidden within the idea of self-realisation through consumption, lending, and endless repayment. It was even thought that the global poor would be able to escape poverty through the idea of endless growth. On the basis of the idea of endless growth, credit became easy and debt was made weightless. There was no reason to worry about debt because one could always meet one’s repayments on the basis that the economy was expanding.

Of course, this could not last forever and the events of 2008 revealed the limits of the idea of endless growth, which I think lead towards a need to recognise the sociological dimensions of debt. This is the second form of indebtedness that the sociology of debt asks us to recognise. From this perspective every financial, economic form of debt is underpinned by a deeper form of indebtedness, a universal form of debt, based upon the fact that we are responsible for each other because we live in societies and cannot live any other way. We are responsible for each other whether we like it or not.

We have sought to deny this truth since the financial crash. The problem of the 2008 crash was that there was too much debt relative to productivity in the real economy and the indebtedness of the consumer societies became unsustainable. Hence the response to the credit crunch became about financial contraction and in the UK at least a turn away from excess towards austerity. According to this policy everybody, but especially, the government had to tighten its belt. We had to limit spending on social goods – hospitals, schools, welfare – in order to make ends meet. It is this policy that transformed the nature of household debt today. The rich were able to buy their way out of this situation. They were able to weather the storm. The poor were thrown ever further into debt. For this reason debt is now no longer about excess, but has instead become a necessity and a reflection of the day to day struggles of people to make ends meet in a minimal society defined by a decade of austerity and a lack of real economic growth.

But the problem with this form of debt is that it is only productive for the predatory lenders who profit from the desperation of people who have nowhere else to turn. By contrast to the creditor who makes a killing, the debtor is caught in a spiral of repayment and lending that never ends. Thus we are back in the economic state of nature inhabited by predatory creditors and desperate debtors and there is little sense of the basic truth that people live and prosper in societies, rather than as atomised individuals. But we are not animals and we should not live in a state of nature. What, then, should we do?

The alternative to this desperate situation would be to reserve austerity for individual consumption (there is no excessive spending, no predatory lending) and create cheap, social debt in the name of collective development and the creation of a better, more productive form of society in order to support individuals. Centrally, however, this turn would require a new way of thinking about debt that foregrounds social responsibility, our necessary debt to each other in creating society and the space for individuals to grow and develop, rather than the fantastical idea that it is somehow possible to live outside of the debt relation where we are responsible for each other.

PODCAST: Loss, grief and life in the debt trap

PODCAST: Isolation and life in the debt trap 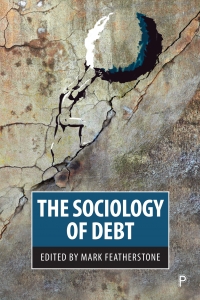 The Sociology of Debt, by Mark Featherstone is available on the Policy Press website. Order here for £60 or get the EPUB for £21.59.