The hidden scourge of modern slavery

If you stopped someone on the street ten years ago and asked them what came to mind when you mentioned the word slavery, the chances are they would say William Wilberforce, something to do with the Transatlantic Slave Trade, or perhaps refer to exploitation in countries thousands of miles away.

Although many people believe that slavery was abolished two hundred years ago, the truth is that it never went away, but morphed into other forms. The traditional images of slavery – of black slaves working in chains on sugar and cotton plantations in the Caribbean and the Americas – are now replaced by a variety of forms of modern slavery. There are now estimated to be 40 million people worldwide in forms of slavery. Compare that with the Transatlantic Slave Trade when about 14 million people were enslaved over a 200-year period and you can see how prevalent it is now.

Estimates suggest there may be tens of thousands or more people enslaved in the UK. To make this figure feel real, that would be about 600-700 people in forms of direct slavery in a large city or a county. In 2018, almost 7000 people presented themselves to the official source of help, the National Referral Mechanism, now run by the Home Office. It is widely agreed that this is just the tip of the iceberg and this number is increasing significantly every year. The number may be close to 10,000 for 2019.  Many victims of slavery won’t report their situation to the NRM, however, because they fear either being retrafficked or being deported.

Those in slavery in the UK include:

Many of those in forms of slavery in the UK are UK nationals, often vulnerable people with learning difficulties or simply those who have fallen through the welfare safety net and are desperate for some income. They are recruited by criminal gangmasters, manipulated and forced into appalling slavery situations, often hidden from public view for years.

Modern slavery exists and continues to grow in numbers because, although it is illegal in most countries, including the UK, people are now disposable and cheap and there is always a pool of people to take the place of those who may be got rid of by traffickers. Recent immigration laws, such as the 2016 Immigration Act, make it much more likely that vulnerable migrants will be forced underground to work in exploitative conditions.

We are all also complicit in forms of slavery abroad because many of the goods and services we use or purchase in this country are made or developed by people working in slavery situations. For example, when the Rana Plaza clothing factory collapsed in Bangladesh five years ago, 1300 clothing workers working effectively as slaves died. Many of the products made at that factory were sold in the high streets of UK cities in outlets such as Primark, Debenhams and H & M. Large companies now have to produce a Modern Slavery Statement (MSS) on their website to show how they are addressing the issue in their supply chains, but thousands of companies have not done so and yet the government has not prosecuted them. Many of those producing an MSS do the absolute minimum to comply with the law. Recently, John Lewis, which has an MSS, was found to be buying bedding from a factory using slaves in Dewsbury. Soon, public bodies will also have to produce an MSS.

The government introduced a Modern Slavery Act in 2015 which started the formal process of addressing the scourge of modern slavery. However, the Act has been criticised as weak in many ways and there are many campaigns to strengthen and improve it. Some minor changes are in the pipeline but many structural faults remain and new forms of slavery are appearing. For example, pop-up car washes often ‘employ’ men who are paid very little and work in highly exploitative situations while many young people are being sucked into the county lines scenario where they are threatened with physical and sexual violence and forced to carry drugs from urban areas to rural areas.

In local areas, organisations such as the police, local authorities, NGOs, the church and community groups have got to together to form anti-slavery partnerships which are leading local campaigns against slavery. Internationally, the United Nations Sustainable Development Goal 8.7, signed up to by most countries in the world, is campaigning for an end to slavery.

People in virtually every walk of life, including doctors, nurses, dentists, care workers, employers in both large and small businesses, advice centres and local organisations may come across people in slavery. Everyone needs to know what to look for – the Local Government Association has published a list of indicators and if you have suspicions, you should report it to the local 101 police line. The police won’t criticise you if you get it wrong but if you are right, you may save someone’s life. 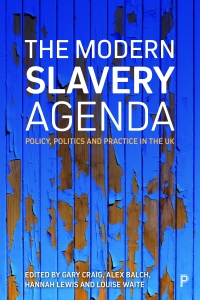