Vulnerability and disadvantage in times of COVID-19

Vulnerability is not only a natural feature of all humans, but is strongly influenced by the social context in which people live. We see this especially now in times of the COVID-19 pandemic. It is to be feared that those groups who are affected by poverty, exclusion and other disadvantages will become victims more than most.

The COVID-19 pandemic makes it clear that all humans and our highly developed societies and powerful economic systems are vulnerable.  The disease knows no national borders and no difference between rich and poor, powerful and powerless. It is forcing the rich countries of the West to drastically restrict their social and economic life with consequences that are as yet unforeseeable.

Nevertheless, some segments of the population will suffer particularly as a result. This applies physically to the elderly and those with pre-existing conditions, where the course of the disease is more serious. There are also social factors that can play a role. Research on the social determinants of health and disease clearly shows that inequality, poverty and other forms of disadvantage play a major role.

Will everyone really have equal access to health care and treatment? Although it is being said that everyone will be treated according to the same criteria, it is not certain whether there will not be a preference for the rich and powerful. Who is best placed to protect themselves from infection? Many people who live in poverty suffer from a poorer state of health, which puts them at a higher risk. People who are homeless and now in shelters face the difficulty of isolating themselves. People who are dependent on their low-income need to continue working, where possible. People who are single parents are more likely to be in need of continued external or grandparent care for their children. People without regular residence status are more likely to have reasons not to go to the doctor if they fear being deported. People who live in cramped conditions or with a violent partner, people who have no or only poor internet access, people whose living space is inadequate, cold or mouldy are now subjected to particularly severe stress, which can lead to depression or self-harm. The psychological suffering and stress that curfews can cause should not be overlooked.

In addition to the health effects of the COVID-19 pandemic and the loss of life, the economic and social consequences should not be forgotten. While the more affluent segments of the population will perhaps come through this crisis relatively unscathed, it is already foreseeable that millions of people in Europe will lose their jobs, with all the well-known consequences of poverty, debt and health problems this brings. It is to be feared that even the generous aid programmes that are now being put together for businesses will ultimately not reach those who need it most urgently.

Nor should we forget that this is a global pandemic and that it is still completely unclear how badly the countries of the Global South will be affected. The COVID-19 pandemic could be a particularly drastic event here, which, embedded in global inequalities, affects hundreds of millions of people without adequate protection and care.

The vulnerability of the population there and of the much weaker infrastructure in these countries is considerably higher than in Europe and the USA – although here too the austerity measures of recent years in health and social systems are now coming to light in a negative way. People in the Global South already suffer from many diseases that are actually easily treatable or completely preventable, and millions die every year as a result of hunger and poverty.

In many countries, economic hardship and lack of state authority and resources will make it impossible or ineffective to implement measures to slow the spread of the disease. This also affects places close to Europe, such as the refugee camps in Greece or Turkey, where thousands of people live in confined spaces and almost without any medical or other care.

It remains to be seen whether we will even hear about their fate at all – in other words, whether the sick and the dead in the countries of the Global South, in the refugee camps or in war zones will even be adequately recorded. Perhaps many victims of the COVID-19 pandemic will not be recognized at all or only in estimates, and their suffering and dying will remain hidden.

Gottfried Schweiger is Senior Scientist at the Centre for Ethics and Poverty Research, University of Salzburg. He works in social and political philosophy.
https://www.gottfried-schweiger.org/ 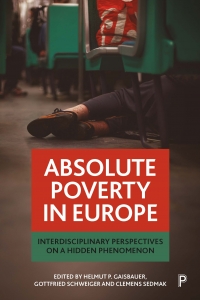