The end of February saw, arguably, the world’s most famous climate change activist, Greta Thunberg, join a climate strike in Bristol’s city centre. Despite the rain, tens of thousands of people – many of them school children – gathered on College Green to listen to the teenager tell them that governments were acting like children and so it fell to young people to be “the adults in the room”.

She went on to say “Once again they sweep their mess under the rug for us – young people, their children – to clean up for them. We must continue and we have to be patient. Remember that the changes required will not happen overnight.”

The question many of us keep returning to is why has is fallen to Thunberg to get the message across? Why haven’t people heeded the warning that countless climate scientists have been pushing with increasing urgency?

We’ve seen very recently that we, as a society and individuals, have the power to change things. Probably the only silver lining of the ongoing COVID-19 crisis has been that the ozone layer is slowly repairing, there has been a drop in air pollution globally and, closer to home, shorebirds have started nesting again on our beaches.

So why has it taken a global pandemic for things to start moving in the right direction? Sir Michael Marmot, Professor of Epidemiology and Public Health at University College London, and chair of the commission of the social determinants of health at the World Health Organisation has said that the current crisis has revealed what governments are capable of doing and shone a light on the motivation for past policies and their outcome.

Luckily, we have seen a big rise in research related to the environment and, from my own list, green criminology.

This month has seen the paperback of Rob White’s Climate Change Criminology part of the New Horizons in Criminology series, which asks what can be learned from the problem-solving focus of crime prevention to help face the challenges of climate change. Industries such as energy, food and tourism and the systematic destruction of the environment through global capitalism are scrutinized for their contribution to global warming and ideas of ‘state-corporate crime’ and ‘ecocide’ are introduced.

Also, this month, we’ll be publishing Angus Nurse and Tanya Wyatt’s Wildlife Criminology, part of the same series, which explores crimes against, and involving, wildlife and the harms caused by this. The authors go well beyond basic conceptions of animal-related crime, such as illicit trade, for a deeper exploration of wildlife criminology, using a novel approach that combines philosophical, legal and criminological perspectives. They shed light on both legal and illegal harms, including blood sports, wildlife as food and abuse in zoos, and consider the potential connections with inter-human crimes. 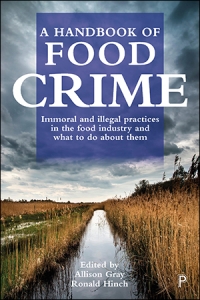 The Handbook of Food Crime, edited by Allison Gray and Ronald Hinch, published in 2018 and is the definitive book on the subject. Through discussions of food safety, food fraud, food insecurity, agricultural labour, livestock welfare, genetically modified foods, food sustainability, food waste, food policy and food democracy, it problematises current food systems and criticises their underlying ideologies. The editors argue for the importance of thinking criminologically about food and propose radical solutions to the realities of unjust food systems. This book was chosen as a ‘Choice Outstanding Academic Title Award’ in 2018.

I’m also excited by a new forthcoming series on the list called Research in Rural Crime from Alistair Harkness and Matt Bowden that will look at important areas such as the climate emergency in the Anthropocene, wildlife crime in rural areas and agricultural crimes.

It’s research like this that gives us hope in these worrying times. Some scientists have suggested that the number of early deaths avoided due to cleaner air might potentially outnumber the deaths from coronavirus, and that while lung damage from dirty air may worsen infections, isolation measures are improving air quality overall.

Jo Jones, from British conservation charity Plantlife, hopes that the current lockdown will encourage home-schooled children and their parents to notice the wildlife around them and to have a re-engagement with nature and plants, no matter where they live.

As always, more can be done, and it’s hoped that by publishing this important research we’ll have created a positive impact, no matter how small.

Please contact me with your proposals and ideas at rebecca.tomlinson@bristol.ac.uk.