Turning away from retribution: How criminology might find inspiration in Christian theology

Criminology is a subject that has always drawn inspiration from a range of other disciplines, be it sociology, psychology, law, biology or even literature. Yet one discipline has been overlooked – theology.

This is a surprising oversight as it is a subject similarly interested in ideas of justice, transgression, mercy and forgiveness. In a new edited collection Criminology and Public Theology, the possible relevance of Christian theology is considered, where hope, mercy and restoration are offered as fundamental alternatives to criminal justice orthodoxy.

In textbooks, it is often assumed that the subject of criminology originated in the 19th century with the work of Italian scientist Cesare Lombroso, who believed that criminals were evolutionary throwbacks identified by the shape of their heads. If criminology had started with Lombroso, it was an unpromising start. But of course, by the time Lombroso was experimenting, people had been interested in criminality for a very long time. He was certainly not the first to wonder about criminals (and what to do with them), and so perhaps the origins of criminology lay further back in history? Criminology textbooks do search further back, but rarely beyond the 18th century with the rebadging of Enlightenment philosophers – such as Cesare Beccaria and Jeremy Bentham – as ‘classical criminologists’.

The fact that they were philosophers rather than criminologists made me wonder how much criminology could gain from greater engagement with philosophy. The result was my Philosophical Criminology, published by Bristol University Press in 2016. It struck me that criminology had a lot to learn from philosophy, a subject that had for centuries been asking questions about how we get on with each other, and what happens when we do not. It was entirely possible that the textbook history of criminological thought needed to be rewritten.

The more philosophy I read, the more I was also drawn to writings on theology – not least because much of the justice system in the UK had historically been influenced by Christian theology, as much as by science, with evangelicals in particular playing a key part in the justice reforms of the 19th century and with the birth of probation.

If criminological engagement with philosophy has been minimal, its engagement with theology has been almost non-existent. The social sciences have long been suspicious of religion, and criminology is no exception. In the late 1970s, there was an attempt to start a conversation between criminology and theology, leading to a book entitled The Coming Penal Crisis, edited by criminologist Anthony Bottoms and theologian Ronald Preston (Scottish Academic Press, 1980); yet since then, the subject of criminology has only rarely turned to theology for inspiration.

In the 40 years after the Bottoms and Preston text, the ‘penal crisis’ has become permanent, both here in the UK and elsewhere, where prisons are overcrowded, understaffed and often offer little in the way of meaningful rehabilitation. In this context, it seemed an opportune time to revisit the conversation between criminology and theology. In April 2018, I organised a seminar at Edge Hill University in Lancashire that brought together leading theologians and criminologists to see where the discussion would take us. The seminar was co-funded by Edge Hill University and the North West branch of the British Society of Criminology. The seminar led to the newly published collection Criminology and Public Theology: On Hope, Mercy and Restoration.

The emphasis is on public theology, which aims to engage with public debate rather than to proselytise or promote the interests of the church. The history of Christian thought is far from perfect and, in far too many instances, has been characterised by judgement and condemnation. Yet, the new collection starts to imagine what a criminal justice system might look like if informed by Christian ideas concerning hope, mercy and restoration. For instance, in Jesus’s Sermon on the Mount (Matthew 5), it is recognised that we are all sinners, in thought if not in deed. If we have all sinned, committed an offence or breached society’s standards in some way, then we ought to see an offender as like ourselves. According to the theologian Chris Wood (1991), there is ‘basic human solidarity in sin, offence, and guilt’. There is no law-abiding ‘us’ and guilty ‘other’, but a common humanity where we can empathise with our fellow offenders. Seriousness of offence might make empathy difficult, but in Luke 6:27, there is the instruction to ‘Love your enemies, [and] do good to those who hate you’. If taken seriously, showing empathy and love for enemies – including offenders – radically challenges criminal justice conventions and questions the dominance of retributive punishment. The various contributors to Criminology and Public Theology show that a shift away from retribution is possible, where our responses to crime can offer hope rather than pain, mercy rather than cruelty, and the full restoration of the offender into the community rather than exclusion from it.

Such an approach might be criticised as blind optimism, a hope for a future that will never come. Yet, in the book’s conclusion, it is highlighted how hope informed by Christian experience is something different. The theologian Tom Wright (2018: 45) is quoted as saying:

The optimist looks at the world and feels good about the way it’s going. Things are looking up! Everything is going to be all right! But hope, at least as conceived within the Jewish and then the early Christian world, was quite different. Hope could be, and often was, a dogged and deliberate choice when the world seemed dark.

Hope for a better criminal justice system is a ‘dogged and deliberate choice’ when the world seems dark. It is a hope that something better is possible; and it requires faith – faith in each other’s potential as members of the same humanity, recognising the dignity of all involved, including the offender.

Andrew Millie is Professor of Criminology at Edge Hill University. His research centres on the intersection between criminology, philosophy and theology and he is currently working on three strands of work: 1) the relevance of Christian theology to criminal justice; 2) the possibility of an aesthetic criminology; and 3) the visual culture and architecture of policing. 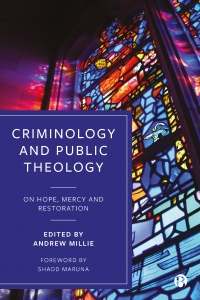 Criminology and Public Theology: On Hope, Mercy and Restoration edited by Andrew Millie is available on the Bristol University Press website. Order the Hardback here for £64.00, or the EPUB for £21.59.