The punishment delusion and the myth of rehabilitation

Ostensibly the criminal justice system acts in the name of the innocent victim to demand retribution and reparation for that victim. It also seeks to prevent further victims through deterrence as a part of any sentence and also offers the criminal the potential of rehabilitation. The proposition that legitimate revenge gives satisfaction to victims, ensures safer communities and provides opportunities for criminals to lead crime-free lives is deeply embedded in our cultural understanding of crime and punishment.

Rarely, if ever, in mainstream discourse, is the fundamental legitimacy of punishment as a response to crime questioned despite the indisputable evidence of the harms that the criminal justice system causes – see, for example, Prison Reform Trust (2022); Lammy Review (2017); Bradley Report (2009). The only response to the failures of justice for victims, offenders and communities seems to be that of getting tougher, and being more efficient and targeted in our retributive responses.

As our lives become increasingly secure and crime free, we have paradoxically become more and more immersed in the second-hand and voyeuristic media coverage of crime-related issues, from dramas to documentaries inside and outside courtrooms, prisons and on occasion the probation service. Of course, the focus of this coverage is the mad, bad and deviant ‘other’ – the people that we all need protecting from and who we can now view and examine from a safe distance. We can fantasise about how we would cope with the violence, the gangs, the drugs, the mental breakdown and the prison sex. These masturbatory fantasies grounded in the energeia (vivid qualities) of punishment demonstrate Freud’s argument that there is no social order without a sexual order. As with any other kind of compulsion we can’t seem to get enough of seeing the suffering of others, whether they are victims or criminals. This sadomasochism is self-generating, contagious, self-defeating and delusional but ultimately reinforcing of the desire for punishment.

The question of why society continues to flog a dead cultural horse is at the heart of Clemens Bartollas’s and my work in which we re-examine the theological, philosophical and criminological basis for punishment and its strange bedfellow rehabilitation. Our focus on the disputed and controversial nature of forgiveness and its historical contrast with retribution provides a critical lens through which to explore these issues. Ultimately, we analyse the failures of rehabilitation as being necessary to justify punishment and argue that the dynamics of redemption are much closer to understanding, articulating and achieving an interpersonal and peace-making justice. We argue for a rereading of the Judaeo-Christian concept of redemption as foundational to autonomous, creative and humane practice in the criminal justice system through seeking a genuine encounter between the criminal justice practitioner and the perpetrator of a crime. In particular, a genuinely therapeutic encounter makes it possible to close the gap between not just the personal and professional worlds of service users and workers, but also other worlds constituted by victims and communities.

We want to insert into criminal justice practice the consideration of what makes humans specifically human, before, without or even after the event of crime. Punishment and deterrent sentencing are anti-therapeutic and prevent genuine transformation, in part through perpetuating the myth of rehabilitation. In bringing about change to counter the locked-in violence of criminal justice processes, our focus is at the level of the individual practitioner and their understanding of what it means for them to be human in the face of the ‘monstrous other’ and the scandal of embracing those who should not be embraced.

In the face of the harms caused by criminal justice we propose redemptive criminology as the beginning of a first criminology for criminal justice practice which articulates our guiding and generative principles and where creative and humane practice can be resistant to the normalisation of harsh penal measures. The pulse of therapeutic inspiration at the centre of this criminology is an exploration of the relationship between myth and reason. Myth is a source of collective memory which, when rationally analysed, reveals new understandings of the human condition. This has been understood in, for instance, restorative justice where ancient and aboriginal sources of communal peace making have been researched and in part motivated by failures of the Christian mythos and its support for retributive punishments. We are seeking to rectify this perspective through a re-examination of the Judaeo-Christian tradition guided by Dietrich Bonhoeffer’s arguments for ‘the non-religious interpretation of biblical terms in a world come of age’. We use René Girard’s analysis of religion and the relationships between the violent and the sacred to argue that the ‘world come of age’ is the ‘age of the victim’. These insights provide the necessary theoretical tools for a detailed examination of the meaning of the relationships between victims, offenders, communities and the criminal justice system. What is clear is that the indisputable innocence of the victim is used to justify harsher and enduring punishments and the creation of new victims. Because they are contaminated, the latter are of course not seen as victims but necessary scapegoats around which we can all cohere to condemn and exclude, thus maintaining social order.

In the processes of redemption, forgiveness is the starting point, not a mythical end point. Punishment takes away the very things that people need to desist from crime, namely relationships, housing and employment – all those resources that once removed are impossible to regain. As an individual, do I get caught up in the mood contagion of the mob to demand retributive justice, or do I question my own complicity in that desire for violence (however much it is legitimated by law)? In this book, Clemens and I have engaged in a narrative of self to make sense of our own experiences in the criminal justice system, and we invite others to do the same. Maybe through learning to see what is really there, change may come about for everyone who is currently being failed by the criminal justice system – victims, offenders, communities and professionals.

Aaron Pycroft is Reader in Criminal Justice and Social Complexity at the University of Portsmouth. 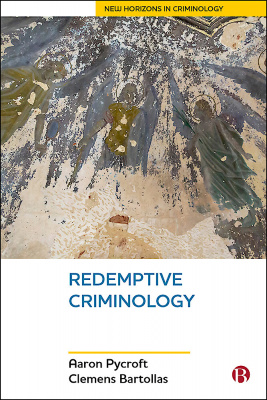