Starmer’s unenviable task: A transformative battle for the Labour Party

I don’t need to tell you that we live in a unique time. The Covid-19 crisis will transform how we live our lives for some time to come. Notwithstanding the social effect, the economic consequences will be profound.

In this week alone we have the seen complete collapse of the oil price, going negative for the first time in its history. The shockwave of this, rising unemployment rates and the coming recession will pose fundamental questions to our political leaders.

The scale and pace of change necessitates transformation in order to adapt and thrive. The problem for the Labour Party is that any attempt to transform or adapt in response to social, economic or political change results in huge factional splits between the left and right. This is the lesson we learn with any analysis of the party’s past. Nearly without exception, the two factions vie for dominance over that change. It is like two tectonic plates shifting position, grinding against each other and creating a lot of friction and heat that eventually results in an earthquake.

These earthquakes, varying in size on the richter scale, have taken place from the party’s inception. From the Attlee government and its approach to nationalisation and foreign policy, to the Blair government’s approach to globalisation and neoliberal economics, significant opposition and protest arose to every leader’s strategy. If Attlee and Blair, the two most successful Labour leaders in its history, have faced extreme and consistent internal opposition, then no future Labour leader will be immune.

The party, the media and the general political environment is also unsympathetic to any serious attempt towards any intellectual renewal. This is the overriding lesson of the Ed Miliband era. In the early days of his tenure, Miliband and his team threw themselves into debates around new ideas, analysing and determining their merits and faults. These included Blue Labour, One Nation and the very interesting pre-distribution.

What I learnt from my interviews for my book is that this renewal process instantly caused factional disagreement, partially based on personality clashes and partially based on genuine intellectual disagreement. This internal battle combined with political pressure to win an election drove Miliband to take, as his team called it, a policy retail offer aimed at achieving 35% of the vote: develop and propose individual policies that poll well with certain sections of the population. This strategy failed in the 2015 general election.

Corbyn, or more precisely McDonnell, picked up the baton for the intellectual renewal of the party. However, instead of engaging with new ideas per se, they set about adapting and updating Bennism for the 21st century, calling it 21st century socialism. It was a serious attempt to integrate ideas like the democratisation of the workplace with radical policy ideas such as a guaranteed citizens income.

Corbynism also resonated with the zeitgeist around resistance to globalisation, certainly economically. There was an implicit view that globalisation and the European Union (EU) were mechanisms that extended the neoliberal agenda. Therefore, internally, the key personnel were anti-EU, but externally (to the public) they were lukewarm to it. Many of the Corbyn’s team viewed it as a capitalist club and an example of a failing economic and bureaucratic architecture.

This view, however, drew a lot of criticism from the majority of the Parliamentary Labour Party (PLP), exacerbating the divisions in the party and critically giving the Blairite elements in the party a hook to challenge Corbynism in general, after several spectacular failures to do so. Using the EU and Brexit, the right were effective in placing a wedge between Corbyn and many of his natural party supporters. More importantly, Corbyn’s et al reluctance, albeit understandable one, to take a definitive position on Brexit was one of the major reasons for the election loss in 2019. They understood there was a big disconnect between those leave-voters in traditional Labour heartlands and the pro-EU urban middle-class supporters in the big cities. Corbyn’s answer was to walk a tightrope between the two and take a middle-of-the-road position. This, evidently, did not work against the clear Conservative positioning of ”get Brexit done”.

Enter the stage Keir Starmer. The task ahead of him is formidable. The biggest task he faces, from my perspective, is how does he successfully transform a party to face the new world? Covid-19, climate change and what looks set to be an almighty recession after the virus subsides, pose massive questions to all the political parties, let alone Labour. Yet, for Labour their natural reaction to such challenges is to split; is to fight; not to coalesce. This makes the situation even more difficult for Starmer.

Right now, Starmer will focus on critiquing the government and largely avoiding the bigger answers. That makes political sense. However, that political positioning will not be enough over the long term if Starmer wants to become Prime Minister. In such times, voters want to know that a political leader not only understands the issue, but has the answer to deal with it. The answer has to be clear and concise. Despite the enormous complexity involved, the answer has to be communicated confidently and clearly. Anything less than that will not work. 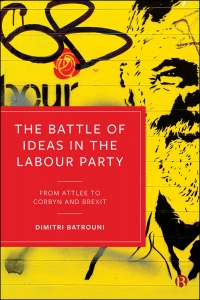 The Battle of Ideas in the Labour Party by Dimitri Batrouni is available on the Bristol University Press website. Order here for £60.00 or get the EPUB for £21.59.