Lessons from the medieval pioneers of social responsibility

Collaboration amongst communities has taken on a new significance in recent weeks, as the impact of the coronavirus is felt around the world. Altruism is beginning to replace some of the more self-centred behaviour, such as hoarding, that was seen when lock-downs were first announced.

Healthcare and education are also experiencing unprecedented support from a wider community. In the UK, volunteers are supporting the health service and vulnerable community members. Philanthropy by successful entrepreneurs is aiding healthcare in other countries. Publicly funded organisations are collaborating with the private sector to provide materials for children affected by school closures

Challenges remain, however. Businesses have been particularly criticised for inadequately reconciling pursuit of profit with government guidance and employee concerns. There have been accusations of companies putting the requirements of customers above the safety of staff. Companies that have suspended operations have done so by putting the jobs of their staff at risk.

With these challenges in mind, what lessons can we learn from the past?

Entrepreneurs in medieval Cambridge were practising social responsibility nearly a thousand years ago. Their actions show that business success and social benefit can be combined in a way that is relevant for contemporary businesses.

Thirteenth-century England had a dynamic economy, with an established manufacturing sector and a growing service sector. Urbanisation and legal advances aided the development of a thriving property market.

Entrepreneurs spotted business opportunities during this period of economic growth. As today, property portfolios could provide a rental income through ‘buy to let’. Property was also a secure asset in which to invest profits and salaries from the commercial and service sectors.

Documents from medieval Cambridge reveal, however, that medieval entrepreneurs were also innovators in the area of social responsibility. Wealth made through property speculation was given to causes that benefitted the whole community.

Cambridge in 1279 was an important agricultural and administrative hub, although not yet a University town. It was home to several established families who had become rich through military and royal service. Yet it was also a place of opportunity for enterprising newcomers seeking careers in commerce and administration.

We learn about their lives from a survey taken in 1279 of all the property in the town and its suburbs. Each property’s location, rental value and owner is revealed. Uniquely, this document also informs on previous inhabitants of the town, as the history of each property is recorded as far back as 100 years. The lives and activities of several generations of residents can therefore be recreated.

Combining techniques from medieval history and economics, the new book by Dr Catherine Casson, Prof Mark Casson, Dr Katie Phillips and Dr John S. Lee reveals this process in detail. It is accompanied by a new translation of the documents, known as the Cambridge Hundred Rolls of 1279.

Drawing on the analysis of over 1,000 properties and 36 family dynasties, the book shows that the medieval property market had many parallels with the contemporary one. Property hot-spots existed in medieval Cambridge just as they do in modern towns. The most valuable property was in the city centre, while cheaper property could be found in the suburbs. Capital gains could be made on property, either as lump-sums or as rental income.

Older families invested the profits from military and royal service in property, with the aim of creating portfolios that could comfortably support their extended family and descendants. The Hubert family successfully preserved a portfolio created by the dynasty’s founder Hubert. This was enhanced by Robert I through a successful marriage into a leading Cambridge family, and through involvement in the grain trade. In contrast, his son Robert II chose to dispose of the majority of his inheritance through philanthropy.

Enterprising newcomers in the commercial sector, meanwhile, invested the profits of trade in property. As a disposable asset, it could easily be liquidated to generate additional income for future ventures. Innovations were also introduced to improve the profitability of property. Matilda le Comber and her husband made their money in blacksmithing. They sub-divided properties, sometimes keeping half themselves and selling off the other half, perhaps as a means of financing their purchase. They put up buildings on vacant land adjoining St Mary’s church. This activity accelerated after William’s death, when Matilda joined forces with her son to acquire further property, including a site that she operated as a brewhouse.

Entrepreneurs directed the largest proportion of their profits to local religious houses and hospitals, however. In doing so, they were supporting key providers of both education and healthcare. They were also choosing to support the wider community, rather than pursuing the option of retaining all the income for their family or for future business ventures.

Social responsibility was significant, and sometimes even to the disadvantage of the donors. The Dunnings held land in Cambridge since the Norman Conquest and by c. 1200 Harvey Dunning and his family were living in a stone house in central which is now within the grounds of St John’s college. However the family struggled to adapt to the more commercialised economy and soon their lifestyle outstripped their income. Despite debts and increasingly precarious finances, they continued with donations of land to the local religious houses of Barnwell Priory and St Radegund’s, as well as to the Hospital of St. John.

Cambridge’s entrepreneurs show that it is possible to reconcile the pursuit of profit with the interests of the community. Their consistent support for religious houses and hospitals provides an alternative model to the emergency efforts that have been introduced in response to contemporary challenges. 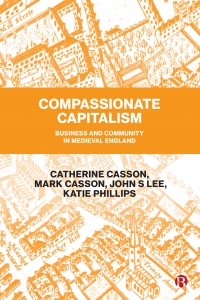