When it comes to racism in Britain, the past is never behind us

In the UK and across the globe, the COVID-19 pandemic has made a seismic impact on society and how those within our communities who may be seen as ‘other’ are perceived. Yet, even before this life-defining event, Brexit, the Windrush scandal, and rising levels of race hate crimes all exposed bitter divisions in British society.

While politicians across the political spectrum have struggled to agree on how to address these issues, sections of the media frequently present one dimensional narratives around both immigrants and what it means to be British, which has served to deepen hostilities in an already divided nation.

I was five years old when I experienced racism for the first time. During the school summer holidays, an older boy at my child minder’s house typed the word ‘chink’ into his ZX Spectrum computer, which then – as if by magic – appeared dozens of times on the monitor screen.

I’ve never forgotten that moment. I remember the cackles of laughter from the other kids. I remember my impotent rage and the burning shame, as I ran to the toilet, hurt and embarrassed, unwilling to let them see my tears. I remember the indifference of my childminder and the white-washing to my mum: ‘He got a bit upset. It was only a joke. You know what kids are like.’

From that point onwards, racism became a regular occurrence in my life, both in spite and in (supposed) jest. It was always hurtful, and it would be another decade before I embraced my dual British and Chinese Singaporean heritage.

Growing up as bi-racial and working class during the 1980s in Britain was challenging in numerous ways. I struggled with my identity in this period and found it difficult to accept my ethnicity in the working class community that I grew up in; I didn’t fit in with the white kids at school, and the other groups of non-white kids seemed to bond together over a shared heritage that excluded mixed race kids like me. Like most kids, I craved a sense of belonging. And that meant being white.

Fortunately, my mum always encouraged me to be proud of being mixed race and was active in her attempts to introduce me to Chinese culture. This wasn’t easy for her, as my parents had split up when I was two years old. I saw my dad once a week, on a Sunday, until he moved overseas when I was 10.

We’d go for long walks in the countryside and then back to his place, where I’d be given strange, spicy food to eat and subjected to an alien culture and a set of rules that contradicted many of the values my mum had instilled in me. I didn’t meet anyone from my Chinese family until I visited Singapore for the first time, aged 17.

As a child, my understanding of what it meant to be ‘British’ was limited to patriotic clichés and caricatures. I rarely felt accepted by my peers in school and experienced racism well into my teenage years, right up until the point in the mid-90s when multiculturalism seemed to finally be embraced and championed by the media.

Two decades later, the past still isn’t quite behind us; it feels as though our society has gone backwards. In 2019, the number of reported race hate crimes increased by 11 per cent (following a rise of 14% in the previous year). The prominent media profiles of right wing figures such as Tommy Robinson and Katie Hopkins appals me. Their acolytes and followers should be challenged rigorously; ignoring the existence of these views doesn’t make them go away.

If Brexit exposed the divisions within our society over notions of what constitutes British identity, the ubiquitous presence of social media has served to amplify opinions that view society through a prism of Them and Us, which is less concerned with who and what we are than with who or what we are not.

I want to focus on these issues in the next book in the Invisible Britain series. This Separated Isle will explore concepts of national identity via a diverse range of opinions and understandings about the meaning of ‘Britishness’. The book will feature stories and portraits of people from across the UK, asking vital questions about the relationship between identity and nationhood to explore not only what divides us, but also the ties that bind us together as a nation — both in the past, and today.

Combining direct testimony with images shot by award-winning documentary photographers and emerging talents, such as the one of Joy here by Mario W. Ihieme, the project will include people across class, race, geography, and opportunity – many of whom may hold wildly opposing views – to present a portrait of a nation where equality, diversity and inclusion are essential qualities for a healthy society.

We’re currently running a Kickstarter to pay the artists and creatives involved in the project, many of whom have lost work and income due to the COVID-19 crisis. If you’d like to support us by pre-ordering the book, please click here. 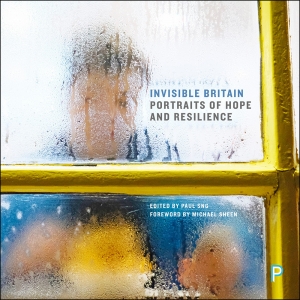 Paul Sng is a documentary filmmaker whose work focuses on amplifying the voices of people who are rarely heard in the arts and media. His first book, Invisible Britain: Portraits of Hope and Resilience, was published in November 2018 by Policy Press and is available to order here.