Why we need an effective trade union response to COVID-19

COVID-19 presents UK unions with both challenges and opportunities in responding to the health emergency. The most immediate concern is the health and safety of workers, whether in the workplace, travelling to work or working at home. However, the crisis also gives unions real opportunities to influence the shape and duration of the economic recovery, to achieve a better society and to organise those workers most seriously affected.

Unions’ historic concerns over health and safety were recognised in the Health and Safety at Work Act 1974. This enshrined unions’ right to the sort of effective consultation that is now vitally important to ensure workers are protected. Having derided unions for over four decades and enacted restrictive legislation when in power, the Conservatives now mention working with unions in daily briefings. This is hardly the first time that UK governments have looked for union support in times of national emergency, it was sought most notably in World War Two, but also in response to 1970s hyperinflation. However, it is not clear that Government is listening to union concerns, as demonstrated by the argument over returning children to schools. If the government truly wants the unions on board they need to listen and act appropriately to support workers.

The TUC is taking a central role in union response, calling for employers to negotiate a safe return to work and more state help for the self-employed whilst providing support for union representatives and publishing a plan for a better recovery. My limited survey of individual union websites reveals that although all unions offered advice and support on COVID-19, their responses are variable. Inevitably the differing impacts of the emergency between employment sectors is reflected in different union concerns, ranging from the health and safety of frontline workers to members facing loss of employment. As might be expected, general unions’ responses are more generalised, albeit for more specific information given through their trade sections. In contrast, unions representing discreet occupational or industrial groups, that I have previously called ‘niche unions’, tend to give more tailored advice.

Although the furlough scheme may save some jobs, I see its real purpose as protecting businesses. However, with corporate failures increasing and organisations such as British Airways downsizing their headcounts, it must be questioned as to how many workers will have jobs to return to. George Osborne advocates a return to austerity, perhaps to save his reputation given the damage his policies inflicted on the country’s social fabric. Therefore, it is imperative that unions campaign against austerity and for the sort of demand management advocated by Keynes to stimulate an earlier post lockdown recovery. A demand that key workers are suitably rewarded for their efforts during the crisis should form part of the challenge to austerity thinking.

Whilst unions may lose members through redundancies and downsizing, the emergency also presents an opportunity for unions, and particularly what I have previously called ‘new generation’ unions, such as IWBG, to offer low subscription membership to workers in low paid, casualised and precarious employment. Many such workers have been victims of the emergency in becoming variously, unemployed, under employed or experiencing work intensification and sometimes working in unsafe conditions. Therefore, I suggest that now is the time for a broad-based campaign linking economic regeneration with the plight of marginalised workers.

Overall, I argue that an effective union response to COVID-19 must include five key areas, namely:

Bob Smale retired from University of Brighton in 2018 after half a century of trade union membership and activism and more than thirty years in working in education. He is now concentrating on research and writing. His research interests include employee relations and pedagogy. 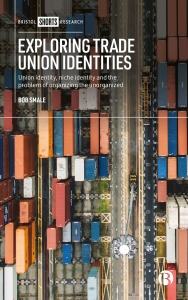