Human rights: the battle between concept and understanding

“What makes the human rights field so interesting is the constant battle between the general concepts and understandings, and their actual application in the lives of specific people on the ground. It is not difficult to set out certain general themes. We can state confidently that for decades now universal human rights and the international instruments which have been designed to promote and protect them, have been a source of hope for many in the world who have been denied freedom, equality and the basic means of survival. They have also provided a discourse and a set of tools for those seeking to end oppression. Ultimately, they show us a way to achieve global peace and solidarity.

Equally, the somewhat bolder ones among us can declare comfortably that as a general rule universal human rights are also a contested site, in terms of their articulation, interpretation and implementation. Universal human rights are not simply something handed down to us by the gods or nature; they are the creation of human agency, imagination, creativity, humanity and above all struggle. The universal human rights – civil, political, social, economic, cultural, environmental, developmental, individual and collective – which we know today, have had a long history in their making; one of protest, revolt, revolution and suffering. As the famous Irish poet, Seamus Heaney, so eloquently wrote:

History says, don’t hope,
On this side of the grave.
But then, once in a lifetime
The longed-for tidal wave
Of Justice can rise up,
And hope and history rhyme
from the play The Cure at Troy, Seamus Heaney, 1990

An associate of my late colleague and comrade Professor Kader Asmal, who was Dean of Trinity College Law School, head of the Irish Anti- Apartheid movement and a great exponent of universal human rights, Heaney could have been thinking about the struggle against apartheid. He knew in his bones that it was in those moments of upheaval that the greatest advances had occurred in the development of human rights around the world. The campaigns for workers and female suffrage, the campaigns by labour unions for workers social and economic rights, the struggles for self-determination against colonialism and neo-colonialism, the campaigns to abolish slavery in all its forms, the civil rights movements, the campaign to end homosexual oppression, all have contributed to the development of recognisable and accepted concepts of universal human rights.

And who would doubt that it was the world-wide death and destruction caused by World War II, including the Holocaust, which was to spur the world into action in trying to develop an International Bill of Human Rights? This, in turn, led first to the United Nations Universal Declaration of Human Rights in 1948, and then the two Covenants on civil and political rights, and on social, economic and cultural rights in 1966; the raft of subject-specific United Nations Conventions, particularly since the end of the Cold War; and a range of regional rights mechanisms such as the European Convention on Human Rights, the American Convention on Human Rights, the African Charter on Human and Peoples’ Rights and the Arab Charter on Human Rights.

Similarly, it is widely accepted that human rights and the instruments created to promote and protect them are continually developing; changing with political and economic shifts in the world and our understanding of it. The struggle to develop and implement them is also a continuing process. What is not so well known is the detail of actual people struggling in specific situations to test the strength and adaptability on the ground of these generally accepted notions.

It is precisely this focus that makes this book so trenchant and timely. These are thoughtful and intense despatches from the frontline of the human rights struggle. International Human Rights, Social Policy and Global Development in its twenty-one chapters (including the Introduction), attempts to describe, critique and add to our understanding of both the history of human rights developments, the strengths and weaknesses of existing international human rights instruments, and their potential application by citizens, NGOs, voluntary organisations and communities to advance social policy, global development and global welfare. The book argues that both the concept of universal human rights and the international instruments developed to promote them are sites of continuing struggle. So it has been historically and so it will be into the future. Despite their obvious weaknesses and failings and their abuse by the powerful, such international instruments can be part of the armoury to fight oppression, inequality and injustice ‘if ’, in the words of John Lennon, ‘we choose it’.

Thus, this book provides an important tool for any of us wishing not only to understand universal human rights and protect, promote and develop them, but also to use human rights-based approaches to social policy and global development. With twenty-four authors from different parts of the world and with different life experiences, backgrounds and opinions, the book provides a wide range of thoughts, ideas and views on international human rights today. Written from an unperfumed, critical perspective, it raises questions about human rights and challenges common-sense beliefs. While the different views expressed in the chapters may not be shared by all, the challenges they raise are something that we all should recognise and seek to address.

Lamentations and denunciations have their place in human rights activity, but they are not enough. Rolled up sleeves and positive, affirmative energy are required. The main message flowing through the pages of this book is one of gutsy determination and hope: the hope which concepts of universal human rights can bring to a world filled with inequality, injustice, suffering and poverty amidst plenty. The candle on the cover of this book is particularly significant. A candle flickering in the wind of adversity can be strong, a beacon of light, but it can also be fragile and blown out if we are not careful. It can also light other candles all over the world without diminishing its strength in any way and create new patterns of light with each new flame – an important message for all of us.

This is a stimulating book written by people with courage, humanity and integrity. It can open minds, provoke debate and prompt greater action and energy among academics, NGOs, activists and citizens to strive for a better world. In keeping with its own critical spirit, its findings and recommendations should be thought about and where necessary challenged by other equally keen-minded and committed scholar-activists. But, above all, it should be read, engaged with and acted upon. 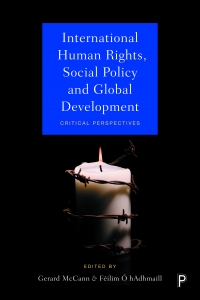 International Human Rights, Social Policy and Global Development Critical Perspectives, edited by Gerard McCann and Féilim Ó hAdhmaill is available on the Policy Press website. Order the hardback here for £65.00, or the EPUB for £21.59.