Can democracies respond to pandemics and protect human rights?

As the coronavirus pandemic spread across the world in early 2020, many questioned whether western democracies would be able to respond as forcefully to the emergency as China did in Wuhan province where COVID-19 first emerged.

Could democracies that value individual human rights enforce lockdowns? Would democratically elected governments implement unpopular policies if they would be punished for them at the ballot box? Emergencies invariably lead to a streamlining of decision making and so one may expect that authoritarian regimes, unbound by constitutional niceties like the separation of powers and human rights have an inbuilt advantage in this regard.

Certainly, there is evidence that some governments were slow to react to the pandemic. The UK did not move to lock down until well after most other European countries had. Whether this was because it was instead pursuing an ill-fated herd immunity strategy or because the government believed that the British people just loved their freedom too much is an issue for debate. On the other hand, it is generally accepted that New Zealand, under the leadership of its Prime Minister Jacinda Ardern, reacted swiftly and decisively, halting the spread of disease and suffering which have led to just 25 deaths in total at the time of writing. In contrast, the authoritarian Belarusian President Alexander Lukashenko completely failed to implement any form of lockdown. Meanwhile the democratic-authoritarian governments of Brazil’s Jair Bolsonaro and Hungary’s Viktor Orbán responded to the pandemic in markedly different ways. Bolsonaro refused to enact any emergency response; Orbán was invested with sweeping emergency powers to tackle the pandemic following a constitutional amendment, evoking the spectre of Adolf Hitler’s Enabling Act and the ill-fated Weimar Germany in the process. In sum, it is just far too simplistic to say that democracies have performed poorly in the pandemic when compared to more authoritarian regimes.

Human rights and the pandemic

This is not to say that democracies face challenges to pandemic emergency powers that more authoritarian states do not. Democracies generally claim to respect and vindicate human rights and these commitments place obligations and constraints on what states can do in response to a pandemic. In this regard, the face mask has become the focus for anti-lockdown ire. It is the most concrete manifestation of state responses to the pandemic. It is literally right in front of our face, so impossible to ignore.

Anti-mask protesters have been described as ‘libertarian’—a philosophy that argues for minimal government interference in people’s lives. What these libertarian protesters fail to acknowledge, however, is that human rights require states to act to protect people. The right to life, for example, obliges states to take positive steps to protect and vindicate this right; it is not enough for the state to simply refrain from acting. Likewise, failure to stem the tide of the virus could lead to hospitals becoming overrun and conditions deteriorating to such an extent that patients would essentially be exposed to ‘inhuman and degrading treatment’. A state that simply refused to interfere in any way with people’s ordinary lives and failed to enact any measures in response to the pandemic would therefore be breaching a number of fundamental human rights.

Ultimately, the human rights movement has been successful, not because it restricts the power of states but because it empowers individuals. Human rights have what I term an ‘emancipatory effect’: the human rights movement has been successful not just because these rights prevent the state or others from encroaching upon a person’s freedom but also because they empower a person to take control of their life. This latter dimension to human rights places obligations on the state to act to allow people to flourish. An understanding of human rights that would prohibit the state from saving thousands of people’s lives would not be a concept of any value whatsoever.

Concerns about democracies being unwilling or unable to protect their citizens are conspicuously absent from many discussions about state responses to other emergencies such as terrorism. Mass protests against such powers are also absent. From asset freezing and mass surveillance to indefinite detention without trial and targeted killings, democracies have shown themselves more than willing to enact measures that are represented as being necessary to tackle the threat at hand. This is the case, notwithstanding the repugnancy of many of these measures to values like human rights and the rule of law that are supposedly fundamental to democracies.

Democracies, therefore, are more than willing to respond to emergencies such as terrorism; whether this response is effective, or compliant with values such as human rights is another question entirely. Democracies are notoriously weak at spreading the burdens of national security emergency powers across society as a whole. From Irish Catholics during the Troubles in Northern Ireland to Muslims in the post-9/11 world, the brunt of these measures invariably falls upon a minority – a ‘suspect community’– that is perceived to be the source of the threat.

What is unique about the COVID-19 pandemic, however, is that lockdown measures and other obligations such as legally mandated mask-wearing affect us all. It would appear that there is no suspect community that can be targeted here. It is perhaps for this reason that lockdown measures and mandated face coverings have been the subject of libertarian protests, yet such protesters are silent when new counter-terrorist powers are proposed, or invasive state surveillance regimes are increased. When a measure affects ‘them’ (others), that’s fine; but when it affects ‘us’, then there are ‘human rights’ and liberty concerns.

What this reveals therefore is not necessarily a ‘libertarian’ conception of human rights. Instead, rights are understood not as human rights, but as citizens’ rights – that you have to be a part of ‘the nation’ to have these rights in the first place. But once you are considered one of ‘us’, the state ‘can’t tread’ on you. Unlike the international human rights movement, this conception of ‘the nation’ is not based upon an understanding of humanity as universal. The fact that many lockdown protesters from Ireland to the UK and US stem from the right of the political spectrum, draping themselves in their national flag and other trappings and symbols of the nation demonstrate that their understanding of ‘we the people’ is an insular one. ‘The nation’– ‘us’ – is based along highly problematic ethnic, racial and nationalistic lines. The issue therefore is not so much that rights in general are being restricted; rather it is about whose rights are being restricted.

Ultimately, democracy is a government ‘of the people, by the people and for the people’. However, this only raises the further question as to who ‘the people’ actually are. Many states are believed to be in the throes of a so-called ‘populist backlash’ and the pandemic may simply be another front upon which this war can be waged. But this does not mean that democracies are doomed to fall into this insular us-vs.-them divide. Democracies can respond to emergencies and democracies and can do so in a human rights-compliant manner. Ultimately, both democracy and human rights have at their core a basis of universality; that we have rights and that we have a say by virtue of the fact that we are human. By insisting on this universality, we can challenge those who seek to drive us apart for their own agenda. That is not to say, however, that it will be easy.

Dr Alan Greene is a Senior Lecturer at Birmingham Law School where he specialises in Public Law and Human Rights. He is the author of Emergency Powers in a Time of Pandemic (Bristol University Press) which will be published on 29 October 2020. 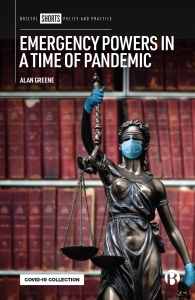 Emergency Powers in a Time of Pandemic by Alan Greene is available on the Bristol University Press website. Order here for £10.39.