World politics in 2021: Infected by rivalry

If China is rising, it must be seeking world domination. If Russia is declining, it must be plotting revenge. The United States, in turn, will surely not refrain from anything to maintain its dominance. And the European Union? A mere puppet of the US. Or worse, a cynical free-rider on American military might which, behind a façade of lofty rhetoric on values, pursues only its own economic advantage. That is what a world that has been infected by rivalry looks like. But is this picture correct?

Those four great powers, the players whose grand strategies have global impact, are surely engaged in intense competition. That is simply what international politics are about: as states pursue their interests, they compete for markets, natural resources, partners and influence. But not every clash of interests leads to rivalry. The distinction is important. Competition is natural and inevitable. Rivalry is a conscious choice to work not only for one’s own interests but against the other: subverting his sovereignty, coercing him to limit his choices or even aggressing him with military force.

Every state has legitimate interests and the right to pursue them in legitimate ways. If China, for example, is successful in securing a contract or in filling a senior position in the United Nations, Europeans and Americans need not rejoice – but as long as China plays by the rules, they cannot condemn it for playing the game. The right answer is to improve their own game. It is only when Beijing breaks the rules that active countermeasures against it are appropriate.

Otherwise, if even actions that the US and the EU undertake themselves are rejected when China or Russia do the same, that will lead to a rivalry without end. For that hard line will only be satisfied when China and Russia abandon all global ambitions or when they crumble – and either scenario is very unlikely. Instead, the world will break up in two rival blocs again, and gradually sever the many economic, academic and cultural links that bind them. Such a divided world will be incapable of tackling the climate crisis, the COVID-19 crisis, and their multiple consequences the world over.

This is also why an alliance of democracies is not the solution. Getting democracies on board is the easy part. But all great powers must be involved in the running of the world order, or it will not be effective. The real challenge is to create thematic coalitions that include the non-democracies to advance multilateral cooperation on specific issues.

China and Russia are indeed authoritarian states, but that does not mean that world politics is about the democrats versus the dictators. Neither China nor Russia is seeking to export its political system. Ideology (to the extent that they have one) plays little or no part in their grand strategies. World politics is about states pursuing their interests, and nearly all states work pragmatically with other states when interests coincide, quite regardless of their domestic politics.

That does not mean that the democracies must not care: they have a moral duty to speak up for human rights everywhere. Yet the EU and the US must also be aware of how limited their leverage is. Since China and Russia are authoritarian states, there will be endless grounds for human rights sanctions. But no sanctions, no matter how tough, will bring a great power to compromise on what it sees as a vital interest – such as the power of the Chinese Communist Party and its absolute control over the Uighur people in Xinjiang province. Rather than setting in motion an endless spiral of sanctions and countersanctions, Brussels and Washington must continue to criticise the human rights situation in every interaction with Beijing and Moscow, in order to uphold the norm. Even though effect on the ground will be limited; in the spirit of William the Silent, one need not hope to undertake nor succeed to persevere.

When China or Russia cross the line in their foreign policy, however, and illegal or illegitimate actions directly affect European or American interests or threaten international peace and security, then effective sanctions are imperative. Cyberattacks, harassing or even murdering people on other states’ territory, the annexation of the Crimea by Russia and the de facto annexation of most of the South China Sea by China: this is where red lines must be drawn.

Also, the EU and the US need not open their markets in areas in which China and Russia shield them off, nor must they make space for them in the multilateral institutions unless they abide by their rules. Reciprocity in applying the rules of the game is a precondition for cooperation.

Cooperate when you can, but push back when you must: this principle allows the great powers to pursue their grand strategies while reducing the risk of escalation. Everything depends, of course, on the grand strategies of the great powers. Thwarting each other must not become an objective in its own right. The EU and the US must not see devious schemes where none exist. But China and Russia must pursue their interests without coercing other states. The more aggressive a turn their strategies take, the more they will push the EU and the US into adopting a confrontational mode. The Russian regime may feel so spurned already that it sees no harm in provoking further isolation. But the Chinese regime has a lot more interest in gaining more influence in the existing world order than in breaking it up.

Maintaining one world, in which all states can freely trade and invest, and cooperate to address global problems: this is the challenge for world politics in the first half of the 21st century. A huge challenge, obviously, but it remains possible. Predicting (cold) war is easy. One does not predict peace, though – one builds it.

Sven Biscop is Director of the Europe in the World Programme at the Egmont–Royal Institute for International Relations in Brussels and Professor at Ghent University. He is an Honorary Fellow of the European Security and Defence College (ESDC), and an Officer in the Order of the Crown of the Kingdom of Belgium. 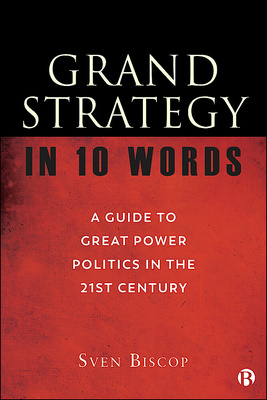 Grand Strategy in 10 Words: A Guide to Great Power Politics in the 21st Century by Sven Biscop is available to order on the Bristol University Press website for £17.59.