What does Biden mean by ‘America is back’?

If Donald Trump’s catchphrase was ‘Make America great again’, a contender for Joe Biden’s is ‘America is back’. The President has said it repeatedly since his election.

But what does this phrase mean?

The order that Biden wishes to restore is sometimes called a ‘liberal order’, an open international system defined by shared norms, rules and mutual cooperation, and governed by international organisations and agreements. Respect for ‘free markets’ and ‘free people’ is often said to be at its essence. This order has been maintained in practice by the United States. The US has provided the security commitments, financing and means of enforcement to ensure its survival. Inevitably, this makes the US the ‘leader’ of this international order.

Liberal theorists sometimes describe American global dominance in euphemistic terms of ‘hegemony’ and ‘unipolarity’. Motivating these descriptions is a desire to distinguish the US’s post-Second World War role from past empires. Empire is a paradoxical and uncomfortable status for a country whose self-image is so firmly rooted in the notion of being a paragon of democracy and freedom, as well as its chief exponent abroad. Critics would argue that the US has been inconsistent in its enforcement of liberal values abroad and its behaviour has been marked as much by coercion as by benevolence.

Whatever terms might be best suited to describe US global dominance, there is some evidence that the US-led international order is under serious strain. Maintaining a military at the size and scale of the US’s is exacting. It demands high costs from the American public, and there is some evidence that the public has grown weary of those costs. It is worth contemplating how much the physical, educational and health infrastructure of the US might have benefited from the resources that were expended to support the US occupations of Iraq and Afghanistan in the 21st century.

Politicians of both parties have shared in this weariness. Both Barack Obama and Donald Trump criticised US military adventurism. Neither President launched a major military invasion on the scale of his predecessors (although it would be inaccurate to paint either as ‘doves’). Their proposed alternatives to US global dominance differed. Obama wanted more multilateralism, greater humility and an acceptance of differences of opinion over internal self-government. His defence policy was characterised by a degree of retrenchment. Donald Trump wanted a focus on ‘America first’ which meant insisting that US allies assumed more of a burden for maintaining the liberal order that the US had created and underwritten for so long. In spite of these key differences, both Obama and Trump believed that the US could not continue to shoulder the burdens of hegemony (or empire) indefinitely.

President Joe Biden is more bullish about US global leadership. This may be more of an echo of a fading past than a portent of the future. Biden comes from an earlier political era than his predecessors. He was born before Obama, Trump, Bush Jr. or Clinton. Biden was elected to the Senate in 1972, the same year that Richard Nixon visited China. He is a product of the Cold War, a creature of the Washington foreign policy establishment and a veteran of the US’s ‘unipolar moment’ following the collapse of the USSR. Biden seeks to restore the US to this time when it was riding high on the international stage.

However, Biden’s enthusiasm for US global leadership may not be enough to bring American ‘back’ to these halcyon days. New challenges operate in the international arena. The choice of whether the US should continue as the global ‘hegemon’ may not ultimately be for the US to make.

The coronavirus pandemic has exposed the vulnerabilities of all economies, yet it did not fundamentally destabilise the basic competitive dynamic of recent international politics. The US’s biggest challenge, both before and after the pandemic, appears to be China. On this, both Donald Trump and Joe Biden are in agreement. Biden’s Secretary of State Anthony Blinken paid rare tribute to the ancien régime when he said, ‘I think in fairness to President Trump he was right to take a tougher approach to China. That was the right thing to do’.

On his first day in office, Joe Biden appointed Kurt Campbell to the National Security Council, with special responsibility for Asia policy. Campbell is a ‘hawk’, who has declared that ‘engagement’ with China ‘has come to an end… The dominant paradigm is going to be competition’. Joe Biden himself avowed: ‘We must prepare together for long-term strategic competition with China’.

This puts Biden somewhat at odds with the European Union, whose member states have found themselves increasingly drawn into China’s orbit. Germany has been a major driving force for a China–EU trade deal. While human rights advocates looked askance, Angela Merkel urged for the deal not to be abandoned. Armin Laschet, the leader of Merkel’s party who is poised to succeed her as Chancellor, seems equally committed to cooperation over competition: ‘The question is – if we’re talking about restraining China, will that lead to a new conflict? Do we need a new adversary?’.

The posture in the United States is very different. On 3 June, Joe Biden signed Executive Order 14032 which extends Trump-era sanctions against Chinese firms. The directive spoke of ‘the threat posed by the military–industrial complex of the People’s Republic of China’. In Congress, bipartisan action is being taken to square off against China. In a 68–32 vote, the Senate recently approved a $110 billion spending package for five years’ worth of technological research, which is seen as a deliberate response to the Chinese government’s proactive investment in its own tech and R&D sectors.

Action is being taken against China’s human rights record as well. The Senate Foreign Relations Committee last week passed the Uyghur Forced Labor Prevention Act, which will ban exports from the Xinjiang region. New Jersey Democrat Bob Menendez and Florida Republican Marco Rubio have teamed up to co-sponsor the Hong Kong Safe Harbor Act, which will expedite the asylum process for refugees from Hong Kong to the United States. On all these measures, one might say that these show a resolve to ‘stand up for democracy’ in a way which was not shared with as gung-ho enthusiasm from the informal policy of retrenchment under the Obama administration.

These actions may be false comfort, however. The Chinese government is convinced that the US is experiencing irreversible, structural decline. The US’s ideational superiority may not be sufficient to sustain its material dominance. China will become the world’s biggest economy this decade. Its government has invested billions more dollars than the US in infrastructure, education and energy. China has been more proactive in trade and in some forms of international development. President Biden gloomily admitted the scale of the challenge after his first presidential phone call with Chinese President Xi Jinping: ‘If we don’t get moving, they are going to eat our lunch’.

Richard Johnson is Lecturer in US Politics and Policy at Queen Mary, University of London. 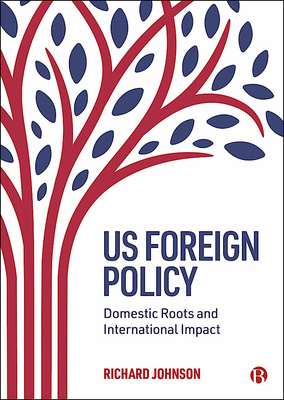 US Foreign Policy: Domestic Roots and International Impact by Richard Johnson is available on the Bristol University Press website. Order here for £19.99.