Biden’s burden: Time for America to shake its addiction to waging war on the cheap

With Joe Biden’s accession to the US presidency, much of the world breathed a collective sigh of relief after enduring four years of Donald Trump’s chaotic foreign policy. Already it is clear that significant changes of direction will accompany the transition, be it in terms of alliance relations, climate action or policy toward Iran. One area, however, where serious change is perhaps less likely is that of the use of force abroad.

Trump made much of his record of starting no new wars and extricating US forces from the Middle East. Yet, while he oversaw troop reductions in some theatres, arguably more striking, especially when contrasted with his earlier promises, were the continuities with existing practice (many aspects of which, incidentally, had become stock approaches during Biden’s tenure as vice president in the Obama administration, especially concerning drone warfare).

Trump expanded existing wars and relaxed operational restraints – thus, for instance, permitting a significant uptick of airstrikes in Somalia. He also oversaw ‘pin-prick’ attacks against Syria and the reckless assassination of an Iranian general. Far from eschewing force, Trump embraced a form of ‘belligerent minimalism’ – his ostensible opposition to war masking a selective triumphal militarism.

Biden can be expected to reinstitute more restrictive guardrails governing ongoing operations, and his tone is likely to be less bombastic. But in its broader characteristics and scope, American war is likely to follow familiar paths. The persistent low-level use of force – remote-controlled, outsourced and secretive – will continue largely unabated.

In this respect, I argue we have arrived at an age of vicarious warfare in American strategic affairs. Crucially, this is defined by the progressive distancing of American society – its people and its politics – from the reality of the ongoing military operations being fought in its name. America sets out to achieve ambitious objectives through the use of force around the globe, but it does so in ways that do not require widespread popular engagement, serious sacrifice of blood and treasure or significant investment of resources and political capital. It is the prospect of war on the cheap.

Various factors have coalesced to push America toward a vicarious way of war. It is willed to varying extents by all major societal actors, from ordinary citizens to political and military leaders.

The American people, many holding romanticised conceptions of war and the military, naturally demand security – which may have to be achieved through force – but want it provided in bloodless ways that do not require their own sacrifice nor harm their comfort, wealth and prosperity.

Politicians, recognising this, seek to confront threats but in a minimalist fashion, employing shortcuts where possible, limiting societal involvement and adopting measures that evade political costs and keep war out of the media spotlight, except when it may be politically beneficial to showcase certain actions.

The military, suffused with longstanding traditions of heroic sacrifice and an aggressive warrior ethos, is keen to maintain its revered status as guardian of the nation. But senior defence officials and military commanders – conscious of changing societal norms, buffeted by political pressures and fearful of litigation – often seek ways to economise, minimise risks to the force or protect institutional interests.

Taken together there are thus strong incentives to fight, to confront threats with force, but to do so in a vicarious fashion if possible. Not all of this is new, but the convergence of both motives and means in recent times is a notable pattern. Advanced unmanned weapons systems, offensive cyber capabilities, covert units and the opportunities afforded by the existence of willing local proxies and expanding markets in private military services all appear to offer ready-made means for forcefully addressing a range of security challenges at little direct cost and with minimal public exposure.

Contemporary American wars fought in this manner can be conducted below the threshold of serious democratic scrutiny and outside the scope of traditional constitutional safeguards. Ageing legal authorities from the immediate post-9/11 era grant officials broad licence to conduct operations, even in countries with which America is not officially at war. A deferential legislative branch, largely mute in the face of expanding executive power, offers only perfunctory oversight. Take the 2011 Libya campaign: members barely raised an eyebrow when President Obama asserted that Congressional approval was unnecessary because ‘operations do not involve sustained fighting or active exchanges of fire with hostile forces’.

It might be thought that the pervasive mass media would offer an antidote to these developments, spurring citizens to reign in executive adventurism. But the press has struggled to fulfil its Fourth Amendment function. Insofar as the media reflects public attitudes, there is strong demand for feel-good war stories but little appetite for uncomfortable critical commentary. The in-depth reporting that does exist tends to be read by small minorities who already care about such issues. Moreover, drone wars or covert operations – secretive by design and fleeting in conduct – are just incredibly difficult to report on, especially in a manner that might convey broader issues or express how they are part of expansive global programmes.

Similarly, given the modern appetite for sound bites or spectacular stories, there are few opportunities to explain the complex nature of the often harmful longer-term effects resulting from such practices. The allure of vicarious warfare for policy makers in terms of its direct ‘positive’ results (such as the death of a militant commander) is reflected in the ease with which those effects are reported. The immediate outcome is the news, while the second-order consequences receive little consideration.

Likewise, military officials come to measure progress toward strategic goals according to such narrow and misleading metrics. Yet, for various reasons – beyond the scope of this short piece – vicarious approaches, however tactically effective, contain inherent weaknesses which, over time, serve to exacerbate problems, undermine coercive effect and embolden adversaries.

Even worse, these methods encourage politically reckless adventurism or lingering marginal commitments. Given that force can continue to be applied against adversaries with minimal domestic political repercussions, there are few incentives to seriously pursue diplomatic alternatives or devote resources to tackling underlying drivers of resistance. Instead, aggressive military activity serves to fuel cycles of conflict, with devastating consequences for ordinary civilians. Witness, for instance, how US-sponsored operations in Africa have contributed to an expansion of Islamist militancy across the region.

In this way, America comes to be trapped in interventionist cycles with little to show in terms of enhanced security. Meanwhile, we have seen recently how a heavily militarised and imperialistic foreign policy can rebound in the form of burgeoning hypernationalism and domestic political violence. If Biden is serious about healing the deep wounds in American society, part of the answer lies in reckoning with the harmful effects of habitual vicarious warfare. However remotely prosecuted, no society can ultimately evade the myriad consequences of endless war.

Thomas Waldman is a Senior Lecturer in International Security Studies at Macquarie University, Sydney. He is author of War, Clausewitz and the Trinity (2013) and numerous journal articles on strategy, contemporary warfare and international security. 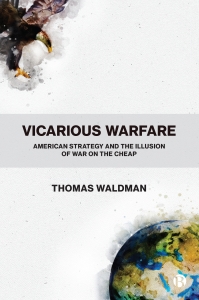 Vicarious Warfare: American Strategy and the Illusion of War on the Cheap by Thomas Waldman is available on the Bristol University Press website. Order here for £20.00.