From ‘I won’t protect you’ to ‘I will’: Why the new authoritarian protectionism marks the end of neoliberalism

Neoliberalism is finished as a popular ideology. It may continue to exist as an incoherent set of commitments to the interests of big business, switching eclectically between backing state subsidies for the private sector, to opposing intervention and greater regulation (for instance, in the interests of workers or the environment). But the original normative power of neoliberalism offered a much deeper and rigorously coherent set of ‘moral’ (as Stuart Hall rightly argued) commitments about the proper functioning of the national political order.

Its rise in the Anglo-American world in the 1980s was founded on a backlash against the progressivism of the 1970s, and rooted in a commitment to radical economic individualism. For Margaret Thatcher in Britain and Ronald Reagan in the United States alike, the bureaucratic and interfering nanny state was the enemy. Hope for the salvation of society lay, not in cooperation, but in aggressive competition between individuals. As Thatcher put it in 1980, at a point when the triumphant victory of her political and economic agenda was far from assured, ‘the better and stronger Britain towards which we … are striving is not Utopia’. Instead, she argued, it was ‘a land in which individuals will have a fair chance, by their own efforts, of winning happiness and security for themselves and their children and, in the process, enlarging the wealth and strength of their country’. ‘Life in that kind of Britain won’t be easy’, she warned.

This was the essence of the distributional claim of neoliberalism. Meritocracy would be brought about by unleashing the free market and curtailing the role of the state in economic management but advancing its coercive power to discipline Britain’s troublesome workers.

As an ideological world view, it certainly had strong authoritarian themes. Thatcher promoted a racialised attack on the alleged criminality of the underclass and the undeserving poor, an explicitly homophobic celebration of ‘Victorian’ or ‘family’ values, and a highly nationalistic foreign policy, the pinnacle of which lay in the Falklands War. But the argument concerning economic distribution was very different from the contemporary new right: only those who worked hard would be rewarded in the new times, and some would inevitably endure hardship. This ‘get on your bike’ outlook polarised societies, sparking adulation and revulsion in equal measure, but ultimately secured sweeping changes to global politics. Bill Clinton and Tony Blair upheld this legacy, giving a more liberal twist to the same distributional argument.

This politics could be summed up with the simple line: ‘I won’t protect you. You are on your own’. But today we see the potency of the polar opposite claim: ‘I will protect you’.

The rise of authoritarian protectionism

In my book, Authoritarian Contagion, I argue that this neoliberal view of meritocracy no longer dominates our politics. Instead, sweeping across the world in a strikingly ‘generalised’ way, is a quite different political argument based on the claim to protection. Crucially, this drops the merit-based element (as a mobilising discourse in politics) and replaces it with a sometimes explicit, other times coded, claim to protect the people on the basis of their kin and creed. In most cases, the nation, defined as an ethnically homogenous bloc, is the group leaders claim to protect. Their distributional offer is not conditional on an individual’s work, but a right conferred by membership of the in-group. I call this in the book ‘authoritarian protectionism’.

The primacy of the interests of the in-group are asserted above all other considerations. Groups considered external to the ethno-nation (e.g. foreigners or minorities that are seen as deviating from the ethnic or cultural norms associated with the true people) are presented as threats to the cohesion and interests of the community. If those mobilised by this politics consider the opposition (from progressive democrats to ethnic minorities) an existential threat to their partisan interests, then they may be willing to support attacks on the democratic process.

Donald Trump pioneered this politics in a ‘pristine form’ in the United States, which reached its logical culmination in the storming of the Capitol and the shameless attempt to steal the American election. But he is by no means the only exemplar of this new anti-democratic ethnonationalism. Under Xi Jinping the Chinese political system – which was already, of course, a one-party state – has made sweeping use of Han Chinese ethnic nationalism. His genocidal persecution of Muslims in Xinjiang, encompassing concentration camps, the forced sterilization of women and ‘re-education’ programmes, increasingly resembles outright fascism. Indeed, ‘ethnic unity’ was a key theme of Xi’s recent Qinghai inspection tour. In a sign of the febrile atmosphere this authoritarian protectionism is creating in society, a group of pro-peace intellectuals were also recently denounced as ‘traitors’ for supporting a delegation to Japan. Normally regime-loyal parts of society have expressed their unease, with a journalist working for a party publication moved to warn that ‘extreme nationalism will backfire’. Xi’s overarching ideological framework – the Chinese dream – follows closely the posture of authoritarian protectionism, promising economic wellbeing for the Chinese people in return for prosecuting a great struggle to rejuvenate the nation and place it at the centre of global politics.

Although seen as ideological and economic antagonists, the politics prosecuted by Xi in China draws from the same mobilising repertoire of discourses articulated by Trump. Indeed, these trends are global and reflect how the political economy of modern capitalism is changing. On the one hand, the evolution of neoliberalism has always posited the creation of a more authoritarian state in order to withstand the destabilising effects of intense economic inequality. ‘[N]eoliberal utopianism is doomed’, as David Harvey put it in 2007, in a prescient musing on the future direction of world politics, ‘to be frustrated by authoritarianism, or even outright fascism. The good freedoms are lost, the bad ones take over’. On the other hand, authoritarian protectionism adapts to the inequalities created in the neoliberal era in a highly effective manner. Hardline individualism is dropped and the ‘collective’ embraced. As markets become more dependent on states for support, a new political economy emerges. The rule of law is diminished, either consciously or inadvertently through the aggressive centralisation of power, and the result is a tendency towards crony capitalism, prioritising the distribution of rent and patronage to supporters, over and above managing the ‘free market’.

We are therefore living – as George Eaton recently observed – through the end times of neoliberalism. But the nature of the alternative is being contested. In a century defined by growing economic and ecological turmoil, we face a choice between a new democratic economy or succumbing to the ‘contagious’ political economy of authoritarian protectionism.

Luke Cooper is a consultant researcher based at LSE IDEAS, the foreign policy think tank at the London School of Economics and Political Science. 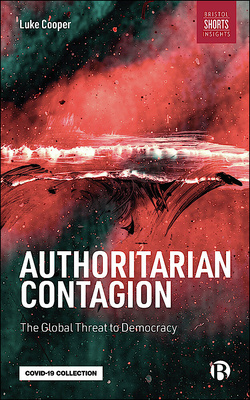 Authoritarian Contagion: The Global Threat to Democracy by Luke Cooper is available on the Bristol University Press website. Order here for just £7.99.