Hooray for the patriarchy

#MeToo was supposed to change everything. If we listened to our media, the world as we knew it was going to change for women. Women were going to be believed. Women shouted out and made their voices heard. It felt like we could be at a tipping point where sexual assault, harassment and abuse was about to become a thing of the past. But of course, it didn’t. Yes, Harvey Weinstein has gone to prison. Yet, at the same time, the number of rape convictions in the UK continue to fall, with only 4% of rape cases reported to the police reaching court.

A woman is sexually assaulted by a male colleague at work. She is asked why she does not report it to the police, but the police have told her there is nothing they can do, pointing her to the figures above. Her workplace closes ranks and refuses to act and he remains in his job. This leaves us with questions: what is the point of reporting sexual abuse if there are no consequences for the perpetrator? And how is it possible that legal and organisational structures fail so dramatically for women? Why is it so difficult to believe what women are saying?

It is all too easy to blame the patriarchy; but the real issue is the culture which underpins it. A culture that normalises male violence towards women as a means to drive plotlines, and legitimates jokes about rape. A culture that overtly discusses murdering the former female UK Prime Minister. A culture where one in three women worldwide are subject to sexual violence. And a culture that has meant that Karen Ingala Smith has been ‘counting dead women’ since 2012; observing that on average every three days in the UK a woman is killed by a man. Where we are in a culture where ‘rough sex gone wrong’ has become a defence argument for men killing women.

There are many ways to silence women, and their interests, and it is not only with physical violence. Male violence is normalised in a culture which talks of a war on coronavirus. The US and UK have been ‘leading the charge’ in their usage of military metaphors, whereas notably the German media (in a country run by a woman) has used science rather than masculinity to speak to its readers. And, we might not know it from our media coverage, but women do exist in science. Not only do they exist but they have also been advising policy makers and designing clinical trials; but apparently there is no space for them on screen.

As much as it is important to call out sexism when we see it, it is useful perhaps to call out the huge benefits this structural violence brings to men who:

Fundamentally, patriarchy means that men don’t have to worry about being heard or believed. We can do better.

Heather Savigny is Professor of Gender, Media and Politics at De Montfort University 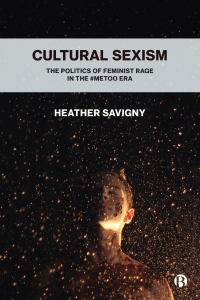 Cultural Sexism by Heather Savigny is available on the Bristol University Press website. Order the book here for £15.99