A spectacular amount has changed regarding trans awareness and public discourses since 2013. This was when I started my doctorate – later adapted into Non-Binary Genders – publishing now to coincide with LGBTQ Pride month.

LGBTQ Pride has its origin in protest against and resistance to police brutality targeting LGBT people. Such resistance was led by, and strongly associated with, trans women of colour such as Marsha P. Johnson and Miss Major, and butch lesbians including Stormé DeLarverie. This resistance is sharply highlighted as still necessary in 2020 by the Black Lives Matter movement, while much of what constitutes (the arguably less political) pride-as-celebration is attenuated due to COVID-19.

Part of LGBTQ Pride is looking back at the past. The project only became exclusively and specifically oriented around non-binary identities in 2014, almost exactly the same time that TIME magazine made their proclamation of ‘the transgender tipping point’, with Laverne Cox gracing their cover.

The transgender tipping point was very relevant, because ‘trans’ and ‘non-binary’ are very closely related categories. I start the book by broadly and simply situating non-binary people as individuals whose genders are neither male nor female. There’s plenty that can be said even about this simple statement – such as there’s many, many ways a person can be ‘non-binary’ (see Barker and Iantaffi, 2019), or debates around ‘sex’ and ‘gender’ and the language we use in relation to these concepts (I consider this too, though in less exhaustive detail than I would like).

‘Trans’ can mean different things to different people for a range of interesting and important sociological reasons, though I broadly favour using trans to refer to individuals whose genders do not correspond with how they were assigned at birth. The phrasing is important here – I simply say genders rather than gender identities, in part to get away from any problematic notion (that can sometimes come up) of cis people ‘being’, while trans people ‘identify as’. The phrasing also sidesteps discussions about ‘whether to say’ sex vs. gender, regarding the ascription of a category to a person based on their genitalia.

The first chapter of the book situates the consideration of non-binary genders and the community and healthcare experiences of non-binary people in relation to the key bodies of scholarship on trans health, trans communities, and their histories (albeit much abridged). I have been guided by precedent in more binary-oriented transgender studies done thus far, conceiving a methodology that made use of mixed-media diaries over a four-month period with follow-up semi structured interviews. I conducted a thematic analysis taking inspiration from social constructionism and Symbolic Interactionism (with some discussion of the relationship between the two in the second chapter). The analysis chapters consider experiences of ‘not feeling trans enough’, liminality and temporality, experiences of heterogeneous community groups and medical practice, and the views held of them.

Reflecting on the project it’s clear that qualitative research on this scale of cannot ever be ‘representative’, but can and should seek to reflect a diversity of experience, to develop more nuanced and multi-faceted accounts – of communities and medical practice in this case. It is my regret that my sample of brilliant and giving participants did not contain more racial diversity. Disparities in accessibility of gender diverse communities and gender-affirming medicine (and experiences of them) for non-white people need more attention, without erasing admirable work already being done (Snorton, 2017).

Ultimately, the book takes a very broad approach to considering experiences of community and medicine for non-binary people, in order to unpack how a relatively new identity (that acts as an umbrella term, and contains within it articulations of gender diversity that aren’t necessarily new at all) shapes the navigation and negotiation of these contexts. While there has been an uptick in peer-reviewed publication that acknowledges or specifically engages with non-binary people, as of yet, there hasn’t been a research monograph on the subject. Understanding of non-binary people’s experiences are critical against a social backdrop of hostility with regards to proposed amendments to the Gender Recognition Act, and ongoing debates about non-binary inclusion and representation, such as additions to the UK census, and campaigns to broaden (or remove) gender markers on official documents.

I completed my PhD at the end of 2016. That it took more than the same amount of time over again to rework into this form is a product of privileges and vulnerabilities – post-PhD my attention was on completing my first book (Vincent 2018) and remedying my unemployment. Despite gratitude for my involvement with my first edited collection (Twist et al., 2020) and a full-time (but fixed-term, teaching-only) position, work on Non-Binary Genders was largely relegated to evenings and weekends – and I was exhausted. Burn-out is a huge problem for academics of all career stages, and conversations about the management of mental health are sadly over-relied upon in comparison to investment in staff – not just through funding more permanent, stable positions and addressing workloads, but as evidenced by recent sector strikes over pension contributions.

These may seem to be disparate points, but it’s vital to connect these dots: research can only fulfil the goal of supporting and catalysing positive changes when the material conditions are in place to allow that work to happen. Likewise, material conditions shape who is more likely to be heard through research – who gets to do research, as well as participate in it. Non-Binary Genders attempts to do some of the work of bringing out some lesser-heard voices, for the express purpose of us collectively doing something about the problems.

Ben Vincent (they/them) is an academic specialising in transgender studies in the Department for People and Organisations at the Open University. 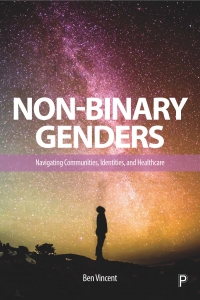 Non-Binary Genders by Ben Vincent is available from Policy Press, imprint of Bristol University Press. Order the book here for £21.59.