Brexit: How we got here and how things can change

Brexit should not be viewed in isolation; it reflects wider global trends. It presents a hyperglobalist effort on the part of Britain and America to reorientate their economies and societies in a ‘race to the bottom’ where social protections are jettisoned in the pursuit of greater economic competitivity.

However, the Brexit hyperglobalists have also formed an alliance with nationalist populists and manipulated insular forms of national identity and nativism to bolster the Brexit movement. Boris Johnson’s lack of interest in negotiating a trade deal with the EU is based on the fact that he does not want Britain to be tied to the social protections and standards the EU will request in order to create a ‘level playing field’ of competition. Johnson’s determination to press ahead despite the economic and social ravages of COVID-19 reveals the extent to which Britain has succumbed to the populist phenomenon, with dogma and zealotry now seeming to be the order of the day.

How did it come about? How can it be reversed? These are central questions in Britain and Europe at a Crossroads. Using primary sources and a focus on rhetoric to examine the ways that political elites engineered a politics of fear, insecurity and Brexit nationalism before and after the Brexit vote, the book also outlines how some of the underlying causes have been at work in Britain over a period of decades. British exceptionalism – a belief that Britain should have a special place in the world order – has its origins in Empire and the sense of loss its demise generated that made the country at times reluctant and awkward members of the EU. The unravelling of the post-war consensus that prized full employment and social rights has been in motion since the time of Thatcher. Thatcherism created a neo-liberal consensus that for long periods Labour was willing to align with, creating a widening gulf between the ‘haves’ and ‘have nots’ that was accentuated by a decade of austerity. A series of scandals extending back to the start of the century also undermined trust and confidence in Parliament and bred a deep cynicism that eroded the concept of ‘representative judgement’, where the public are willing to trust the political class and its judgement and expertise. Within this concept there is a tacit belief that MPs should have the courage and reason to defy irrational and dangerous arguments. These vitally important values seem to have been diluted in this age of anxiety and populism. In an age of post-truth politics, many members of the public are more interested in emotional displays and whether political figures are willing to align with popular prejudices and populist crusades. The 2016 referendum created a ‘super-mandate’ which was used to push through a hard Brexit, but also brought about the transformation of the political scene. Demagoguery, pitting the people against parliament and ‘tabloidising’ political rhetoric became political stock in trade.

How can things change? As noted, the seeds and origins of our present dilemma predate the referendum; we need to restore the radical consensus of the post-war period. This would not necessarily mean old-style statism, but would mean that the state has a major role to play in ensuring that citizens enjoy sufficient access to resources so that life chances and capabilities are not constrained and stunted. The state would avoid the dangers of overt centralisation through dynamic partnerships with local government, a rejuvenated civil society and social enterprise. The application of proportional representation for Westminster, regional deliberative decision-making feeding into national decision-making processes, and a reformed House of Lords could all do much to rejuvenate our democracy and create a new deliberative consensus centred on social justice.

A disregard for fact and a sheer lack of professionalism and integrity have been marked features of the Johnson administration’s response to COVID-19. This moment might be the start of the transformative process the country needs, just as growing numbers of the public are fully confronted with the failure of populism to grapple with real-life and complex problems. Good politics and decision-making is so much more than swagger, playing to the gallery, crafted soundbites and posturing. This fact will increasingly dawn on the public as we enter the summer and a key decision needs to be made as to whether to ask the EU to grant an extension on trade talks. A failure to secure an extension will lead to the country having to fall back on World Trade Organization rules and the hardest of hard Brexits where our huge share of trade with the EU (currently 45 per cent of exports) is imperilled. The social and economic consequences of such a Brexit are unimaginable, especially alongside the COVID-19 pandemic.

Seeking a long transitional phase of years will be a good start in putting the country on a road to post COVID-19 recovery but also, as and where possible, close involvement in any proposed recovery programmes put in place by the European Commission. A new Social Europe agenda in the EU, centred on stimulus and improved welfare convergence through a European Social Union, would make many in Britain regret leaving the EU and do much to nurture at least a mood for close alignment with the EU and at best a real desire to rejoin. The book argues that we cannot fully exorcise the demons of populism until we make that decision. I remain confident that one day Britain will again be a member of the EU.

Andrew Ryder is Associate Professor of Sociology at Corvinius University of Budapest. 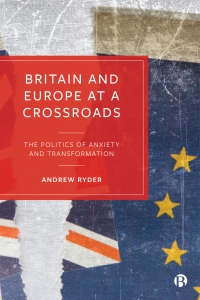 Britain and Europe at a Crossroads by Andrew Ryder is available from Bristol University Press. Order the book here for £60.00, or the EPUB for £19.43.