The legacies of colonialism

Debates about the origins and effects of European rule in Asia and Africa have animated the field of economic history since the 1850s. Decades after colonialism ended, academics and the public at large still discuss its legacies and how it shaped the capacity of modern nation states to achieve economic growth.

Former colonies are home to most of the world’s poor people, but they also include many of its fastest-growing emerging economies. Can the study of colonialism explain the historic roots of poverty as well as growth? How much do differences in economic performance since independence reflect differences in how countries experienced colonial rule?

Since the 1990s, the study of colonial legacies has changed its perspective. Earlier, economic historians had taken it for granted that the way colonial governments worked, and the effects that they left behind, had more to do with the aims and capacities of European states than with the regions they ruled over. This assumption no longer holds. Local conditions, like geography, indigenous business and indigenous institutions, profoundly influenced the origin, the operations and the impact of these regimes.

The Economic History of Colonialism is a synthesis of this new understanding. It brings together scholarship from both economics and history to show how a complex interaction between European ideas and institutions and tropical societies and geographies shaped poverty as well as prosperity in these regions.

How does this new approach work in practice? A few examples will illustrate.

How did colonialism affect the living standards of the subject peoples? Recent work in quantitative economic history has made innovative use of surviving sources to answer this question. These studies show that the experiences were very diverse because local and global factors shaped the ability of the colonial states to raise taxes and spend money on welfare in varying degrees.

For example, many colonial officials saw little advantage in providing opportunities for education to their subjects, beyond perhaps what was needed to staff government jobs. And yet, there were big differences between colonies. Take two British colonies in Asia: in 1951, the literacy rate in Sri Lanka (Ceylon) was 60 per cent, whereas that of India was 18 per cent. The ideology of colonial rule cannot therefore explain such differences; we also need to consider the capacity of colonial states and how local economic and political pressures influenced them.

Some patterns do stand out. Inequality is one example. In most colonial territories, the process of economic change, as well as the nature of rule, favoured some groups more than others. These divisions could be on racial lines. European officials and settlers often received favourable treatment to the detriment of indigenous majorities. They could also be based on region, occupation, caste, class and a number of other dimensions.

Business history is another example of how local conditions matter. Until recently, global business history worked on the assumption that modern business emerged in Europe first and travelled to the tropical world via European expansion and colonialism. There is no doubt that colonialism and capitalism were deeply interdependent processes. Many commercial and company laws, for example, were coded in Europe and then spread throughout the world via colonial rule. But to assume that modern business everywhere was a European legacy also reflects an oversight of how local conditions mattered to the functioning of business firms, as well as how indigenous businesses joined and shaped capitalism.

Again, recent work in the field has tried to meet these gaps. It shows how colonialism sometimes obstructed the emergence of local enterprise, but in other instances, local groups were encouraged to take more risks and start new enterprises, ranging from the Indian-owned cotton mill industry of western India, through cocoa farming in West Africa to Chinese enterprise in South East Asia. These works also show that business organisations varied within this world, depending on where the firms procured their capital, stock markets or social networks.

The Economic History of Colonialism addresses broad questions, including: is there one story behind the emergence of European rule over Asia and Africa? Did colonialism make the world more unequal? How were colonial stated funded? Did colonialism obstruct or aid capitalism? Or, why is there a belief that European empires changed the natural environment in Asia and Africa in fundamental ways?

Debates around globalisation, migration, global finance and environmental change are intensifying. Examining the relationship between colonialism and economic development can inform such discussions in significant ways. 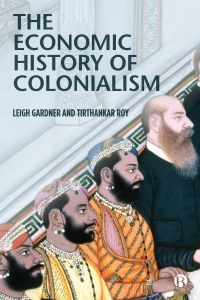 The Economic History of Colonialism by Leigh Gardner and Tirthankar Roy is available on the Bristol University Press website. Order the book here for £19.99