Sanctions for the poor, runaway rewards for the rich

It’s time to end sanctions and review the balance of rights and duties across society.

Benefit sanctions, suspended during lockdown, have now been reintroduced. While Britain’s benefit system for working-age adults has always come with some degree of work conditionality, this is now applied with unprecedented severity. Since 2012, over 5 million sanctions have been issued often for minor breaches such as missing or being late for a Jobcentre interview. At one stage the Department of Work and Pensions (DWP) was levying more fines than the mainstream justice system.

Conditionality has been a key part of the wider principle of social reciprocity – the idea that rights come with duties. The social security reforms introduced in 1911 and strengthened in the post-war period introduced new rights and entitlements, but ones that came with a duty to seek work.

While reciprocity has been an important source of public support for collective social security, today’s emphasis on coercion undermines the vital principle of entitlement. What is the case for punitive sanctions in what is set to be the weakest jobs market for decades and when evidence shows that new claimants are actively seeking work? Far from helping people back to work, sanctions have simply pushed the jobless into deeper poverty and ill-health.

The principle of reciprocity has long been applied in a heavily one-sided way. Wealthy and low-income citizens are treated by different standards, a built-in source of inequity exacerbated by deep-seated divisions across society, near-peak levels of poverty and the erosion of former unconditional collective rights and public goods.

Despite question marks about the source and wider impact of many top fortunes, and the growing mountain of unearned and lowly taxed wealth, lavishly paid corporate leaders and financiers mostly get a free ride from government and little proper public scrutiny. Today’s business elite, free of the ‘deserved’/‘undeserved’ distinction applied to benefit claimants, has been handed a licence to secure an inflated share of national wealth out of proportion to their contribution. In contrast, Britain’s poorest citizens end up with low pay, insecurity and an often hostile press. While the DWP is seen as alien by large numbers who seek its help, the HMRC and the Department for Business, Energy and Industrial Strategy are, for the rich, essentially benign.

Today’s plutocracy mostly views its self-interest and that of society as one and the same. Of course business makes a big contribution to jobs and prosperity, but is supported in that role by significant and growing state support – from an educated workforce to a system of ‘corporate welfare’ in grants, subsidies and tax breaks worth some £93 billion pa (close to the total benefit bill excluding pensions). This – along with crisis-related hand-outs costing billions each week – comes free of conditions on tax dodging, employment practices or social responsibility.

Against this, the ‘rewards’ offered by society to a growing section of the workforce – from care workers to delivery drivers – are job insecurity, low pay and often harsh working conditions, despite their performing, as the pandemic has revealed, the essential but poorly compensated tasks on which society depends. Millions are active citizens, carers and volunteers, mostly women, typically giving a good deal more than they take.

The pressure to Build Back Better provides a real opportunity to create a more even pattern of rights and responsibilities across society. As a first step, the futile sanction system, aimed at pushing people into jobs, whatever their quality or stability, should be brought to an end. A sense of common citizenship should be recognised through a new guaranteed income floor for all, an income Plimsoll line that would cut poverty while providing greater social resilience in an increasingly fragile age.

Big business leaders also need to exercise greater responsibility to their workforce and local communities. In the United States, some corporate leaders have called for an end to the mantra promoted by the pro-market Milton Friedman that ‘the social responsibility of business is to increase its profits’. But this requirement needs to be formalised. State financial support for companies, for example, should require a proportionate equity stake. Large corporations are in essence quasi-social entities, operating in interdependence with society.

By socialising a small part of the economy, such stakes would tackle one of the key roots of endemic inequality, the concentration of returns from economic activity. The equity stakes could be placed into a new citizen’s wealth fund, one owned by all citizens on an equal basis, and managed by an independent board of guardians. The annual returns from the fund could finance new public investment, or an annual citizens’ dividend. Variants of this approach already operate in areas as diverse as Alaska and Shetland.

These moves would help to rebalance Britain’s skewed politics of reciprocity. An income floor would finally acknowledge the contribution of wider society, including the small army of the unpaid and poorly paid alike who more than fulfil the obligations of social membership. Social stakes in industry would recognise that society is as much a stakeholder as are shareholders, while such measures would build new pro-equality forces into the socio-economic system.

Stewart Lansley is a visiting fellow at the University of Bristol. He is the co-editor of It’s Basic Income: The Global Debate and author of A Sharing Economy: How Social Wealth Funds Can Reduce Inequality and Help Balance the Books. 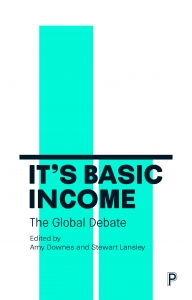 It’s Basic Income edited by Amy Downes and Stewart Lansley is available on the Policy Press website. Order the book here for £12.79.