Poverty blights the lives of children and young people. The Child Poverty Action Group estimated that there were 4.2 million children living in poverty in the UK in 2018–19. That is 30 per cent of all children, or nine out of 30 in a classroom. The economic collapse caused by the COVID-19 pandemic will have made this inequality significantly worse. Media reports suggest that almost 2,500 children have been admitted to hospital with malnutrition in England in the first six months of 2020. This is twice the number from the same period in 2019. Extreme child poverty in the UK is a humanitarian and ethical crisis.

In educational terms, poverty is a significant disadvantage. The link between poverty and poor educational outcomes and wellbeing in the UK has remained stubbornly and depressingly high despite longstanding policy concern at national, local and jurisdictional levels of government. The cumulative effect of economic, material and social levels of deprivation leads to restricted opportunities at school because of a shortage of money to pay for resources, and restricted social opportunities because of the expense of school trips and other social activities. The lack of the correct school uniform due to poverty can be a source of conflict for pupils living in poverty.

Schools are well placed to be a key service in the identification of disadvantage and poverty. Yet the impact of COVID-19 on schools has been substantial for pupils and staff. Although schools have remained open for disadvantaged pupils, many schools reported low attendance during the lockdown. The social and emotional disruption caused by the pandemic and the subsequent school closures is highly likely to have increased or exacerbated student anxiety and other mental health issues. There is also a concern that many pupils will feel less connected to their schools and may struggle to return.

Poverty discriminates against some communities more than others. Children are more likely to be poor if they are from black and minority ethnic groups, live in lone-parent families or are from families of three or more children. The pandemic has disproportionately affected the health and finances of people from black and minority ethnic groups and those living in conditions of extreme poverty. Even before the pandemic, 72 per cent of children growing up in poverty lived in a household where at least one person was in paid employment. These lowest paid jobs are at risk from the economic backlash of the crisis.

Postcode also matters to the education of children living in poverty. The UK is an increasingly divided nation both in terms of wealth and poverty and in the educational opportunities for young people living in poverty. The picture across the UK is not even, both in terms of the distribution of poverty and the responses and practices of policy makers. For example, poverty among young people between 14 and 24 is highest in London at 38 per cent, but at the same time the proportion of young people claiming out-of-work benefit is much lower in London than in much of the north of England. At the local level, estimates of poverty affecting young people are highest in the Welsh valleys, cities across England and many coastal towns. However, severe levels of poverty exist for young people across all four jurisdictions of the UK with huge divides between levels of affluence and disadvantage in Belfast, Cardiff, Glasgow and London.

Poverty is differentially experienced for children and young people in schools within the four jurisdictions of the UK. There are significant differences between the political contexts of the four UK jurisdictions in terms of their conceptualisations and policy enactment around child poverty. While the education systems in Scotland and Wales to some degree reflect jurisdictional commitments to social justice that allows teachers to engage with young people living in poverty, the situation is more complex in England and Northern Ireland. In England, central government pressures of performativity of schools and teachers and curriculum control have worked against teachers supporting children in poverty while in Northern Ireland continued sectarian problems have perpetuated educational inequality.

Since the process of partial devolution, the four jurisdictions of the UK have had separate education systems that operate within a similar economic framework that has been dominated by the politics of austerity. In policy terms, cultural and historical factors have helped to shape educational priorities in resourcing and curriculum design. Despite the limitations on the powers of the devolved assemblies across the UK jurisdictions, there is still some flexibility for schools in curriculum design and pedagogy, enabling teachers, to different degrees, to connect with the life-worlds of marginalised groups. In England, on the other hand, education policy and to some degree practice are controlled by central government. Importantly, recent curriculum reforms in England have restricted what is understood by knowledge, or what schools are allowed to teach, and that restriction has disproportionately affected marginalised groups whose cultures, ethnic backgrounds, class or gender mean that they have been given the least support in accessing academic knowledge. This includes children and young people who are growing up in poverty.

There are historical, social and cultural factors that make poverty a postcode lottery in terms of quality of schooling in the different parts of the UK. The question remains whether successful local interventions are context-specific as the research evidence seems to suggest, or can we learn from particular jurisdictions or cities? While the UK central government scrapped child poverty targets, these remain in Scotland and Wales alongside plans for implementation. Scotland has the lowest school exclusion rate in the UK by some distance. In Glasgow, treating knife crime as a health issue has led to a dramatic reduction in stabbings of young people. In Scotland, schools talk of relationship policies instead of behaviour ones. Perhaps it is time for policy makers in England to look north.

Ian Thompson is Associate Professor of Education at the University of Oxford and Co-Editor of the journal Teaching Education. He is a leading member of the research group Excluded Lives. Gabrielle Ivinson is Professor of Education and Community at Manchester Metropolitan University. She co-ordinates the Creative Margins network exploring how to make arts accessible to marginalised young people. 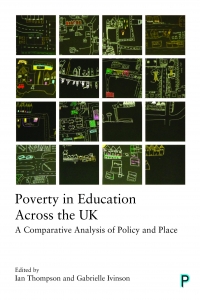 Poverty in Education Across the UK edited by Ian Thompson and Gabrielle Ivinson is available on the Policy Press website. Pre-order here for £21.59.