Child poverty is not inevitable; it is a political choice

Child poverty is distinct from adult poverty: a child living in poverty for even a relatively short period, by adult standards, could easily be impoverished for a large chunk of their childhood.

This is critical as poverty adversely affects many aspects of child development, resulting in children accumulating disadvantage throughout their childhoods and beyond. When we speak about child poverty we often overlook the fact that most children reside within families. Children having to spend their childhoods in poverty adversely affects all members of a family, adults included.

For those cuts that have already taken place, such as the two-child limit affecting child tax credits, Housing Benefit or Universal Credit, the full consequences of the cuts have yet to take effect. The inchoate Universal Credit, which has a five-week wait and is less generous than the six previous benefits it replaces, has still to be fully rolled out. Furthermore, in their election manifesto, the new Conservative government pledged no new measures to mitigate these cuts and so will preside over £3.8 billion of further decreases to working-age benefits.[2] This will exacerbate what is already a crisis, and will increase, not just levels of poverty for children, but consequent problems for them in relation to health, wellbeing, family stress and physical safety, among other issues.

Since 2013, in collaboration with the Child Poverty Action Group in Scotland, I have been undertaking research each year with the same group of families living in poverty to explore the effects of welfare reform. I have observed the effects that poverty has on families, including on their mental health, which is declining. Mary, who has a disabled son, describes her anxiety thus:

‘It has just gone overboard now. I was actually at the doctors today about it. But again, that’s money worries. My anxiety is making me really, really ill. My anxiety has gone through the roof. I can sleep, but the minute I wake up, all I’m thinking about is money, money, money. What have I to pay tomorrow? How am I going to get the electricity to do another two days? It’s quite scary’.

As time goes by, Mary’s anxiety becomes more acute and she increasingly self-excludes from friends and family because she feels she has nothing positive to add to events. She says:

‘I’ve got two really good friends that I used to see them all the time. Now I’ve just not got the heart to… I just…there’s nothing to tell them. I’ve not been nowhere, I’ve not done nothing. And it comes down to, as well, I think, no money, I’ve, you know, they talk about their work, and their families, where they’ve been and where they’re going on holiday, and I just, I kinda… like for my birthday, it was my 40th in April, and one of my friends had organised all the girls to come over and I just felt like the chicken with one wing because… I was the only one sitting there with no job, no money, and I didn’t know what I was going to eat that night. It was quite a sad situation to be in.’

‘the fact that he tried [to commit suicide] petrified me.  And as a parent you just think “what have I done wrong?  I can’t believe I never saw that.”  And he obviously feels he can’t talk to me.  And I totally blame myself.  I actually wasn’t even aware of what had happened.  And that bothered me as well because seemingly when it all unravelled I had been in the house… I felt obviously devastated for [my son] but I felt so guilty for [younger son who witnessed the attempt]’.

It is not just mental health services that are affected by service cuts. Cuts to youth services and Sure Start services have reduced support to children and families and increased the pressures of living in poverty. Since 2010, spending on youth services in England has been reduced by 69 per cent[5] and some areas have seen funding reduce by as much as 91 per cent in three years[6]. Since 2009 up to 1,000 Sure Start children’s centres have closed.[7] This is in spite of the evidence that such services make a real difference to the lives of children and families living in poverty. For example, in deprived neighbourhoods in England where there were high levels of Sure Start service provision, visits to hospital to treat injuries fell by a third for all 11-year-olds.[8]

Why does no-one seem to be listening? Children are. Children show a high level of understanding of poverty and inequality. They express disbelief and frustration that so many families experience these issues. They firmly believe governments have a responsibility to protect children from poverty and that this is not currently happening. In research undertaken by the Children’s Parliament in Scotland, children said: [9]

“I think you should move poverty up as a priority because it’s becoming more likely to happen.” (age 12)

“They’re doing stuff, but there’s still people in poverty. That means what they’re doing is pointless because it mainly helps the rich.” (age 12)

“My father cares for me 3 out of 4 days per week and if it wasn’t for my disability, he wouldn’t have had to give up his 2nd job… Often things happen that people can’t control, which can leave them worse off money wise.”

“If your parents are stressed about money and argue a lot, it’ll impact you and you feel like you can’t do anything about it” (age 10)

These children clearly understand the causes and consequences of poverty for them and their families. Child poverty is not inevitable; it is a political choice. This is why we must push our leaders on child poverty. The time to act is now. 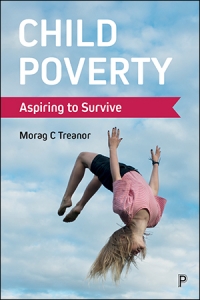 [9] CHILDREN’S PARLIAMENT 2018. “The Weight on Our Shoulders” – Consultation on the Child Poverty Bill and Delivery Plan. Edinburgh: Children’s Parliament.