In the UK, professional social work came of age in the 1970s with the establishment of Social Services Departments. However, during the 1980s challenges arose from the rise and domination of neoliberalism and associated managerialism, the former seeing the market as the organising principle of social life, the latter employing business principles, practices and techniques to implement neoliberal goals within public services.

Deprofessionalisation resulted as managers increasingly dominated and controlled what practitioners do and how, with the social work task narrowed and truncated in the process. The focus became completing bureaucracy speedily to meet targets, ration resources and assess/manage risk, with practice confined to the micro level on presumed individual problems, rather than challenging and changing social structures that create oppression. For example, record numbers of child protection investigations increasingly resulted in little help or support, with intervention limited to telling parents/carers to change their behaviour/lifestyle or face losing their children to adoption. Similarly, in relation to adults, care assessments became dominated by strict eligibility criteria which means many people are not having their needs addressed.

Such issues have been exacerbated by the impact of neoliberalism’s austerity policies on social work and welfare provision more generally. Austerity, a response to the financial/banking crisis of 2008 and ensuing Great Recession, led to Coalition and subsequent Conservative governments arguing it was necessary at a time of national emergency. However, the real purpose was political rather than economic, the aim being to shrink the state and reduce welfare provision more permanently. Indeed, in November 2018 the UN rapporteur, Professor Philip Alston, produced a damning report on poverty and inequality, arguing that austerity was being used as a weapon against the poor with benefits cuts and sanctions being prime examples. The coronavirus pandemic has added to the problems confronting the poor, leading to an essentially punitive welfare context within which much social work now takes place.

As I argue in my book, Social Work: The Rise and Fall of a Profession?, critical/radical practice seeks social justice and social change and has an emancipatory potential by, for example, focusing on deprivation/poverty which significantly impacts on mental health, wellbeing and, in turn, parenting. One large-scale study found that children in the most deprived ten per cent of English small neighbourhoods were over ten times more likely to be taken into care or be the subject of a child protection plan than in the least deprived ten per cent. Relatedly, since 2010 when austerity took hold, focusing on the individual family and/or parent and their actions/inactions became more ethically problematic in the context of key family supports being stripped away: decent incomes, benefit cuts, timely health care, family-friendly working, adequate housing, good public transport, local support services and so on.

There must also be a rethink of the current primacy of ‘concurrent planning’ or ‘fost-adopt’ practice – placing children as quickly as possible with new families who have legal adoption as their goal. Or again, as I have already alluded to, there has to be less of a focus on the ‘risk’ parents/ carers pose and far more on their ‘strengths’ and ‘safety’ capabilities which in turn need to be embedded in an understanding of the structural conditions relating to inequality, poverty, poor housing and strained service provision. Essentially, therefore, the argument is for a refocusing towards family support and a different child protection narrative, one that acknowledges the impact of poverty and inequality on children and families and which interrogates the causes and consequences of deprivation. It is a powerful counter to much current child protection practice which amounts to punishing the poor.

In short, and despite challenges, social work is greatly valued by service users and there remains an important place for the profession in society. It is committed to understanding and supporting people’s lives in an unequal and divided society, assists people at times of difficulty and offers solidarity and empathy. It should not be limited to an increasingly narrow set of skills and tasks focusing on rationing and risk in a residual ‘welfare’ state. It is a profession worth defending and advocating for, not least in the form of critical/radical practice whereby practitioners, both individually and collectively, work to challenge and change the socially unjust and unequal neoliberal world we currently inhabit.

Dr Steve Rogowski is a qualified and registered social worker who has practised in the UK over five decades mainly with children and families. 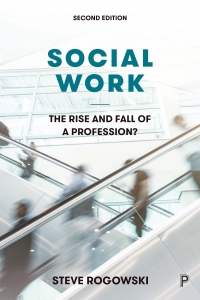 Social Work: The Rise and Fall of a Profession by Steve Rogowski is available on the Policy Press website. Pre-order here for £11.49.