The potential of civil society to bring about social change

The publication of the first four titles in the new Civil Society and Social Change book series from WISERD marks a propitious juncture to reflect on the potential of civil society to bring about social change.

Here it should be noted that the term ‘civil society’ is a contested one. For the present purposes, it refers to the space outside the family, market and state. It signifies a broad range of organised and grassroots groups, including non-governmental organisations (NGOs), social movements (such as environmentalists and human rights campaigners), trade unions, grassroots organisations (including local community groups), online networks and faith groups. The academic literature offers contrasting views on the nature and role of civil society. A prominent strand of thinking views it as a strong, vibrant arena where people network, socialise, exchange ideas and mobilise or campaign on issues of shared concern. According to this perspective it can be seen as the watchdog of democracy, offering a counterbalance to the power of the state. Others, however, emphasise the vulnerability of civil society to co-option, domination and subversion by an over-powerful state and unfettered capitalism.

The launch of the Civil Society and Social Change book series in November 2020 is timely as it also coincides with the 25th anniversary of two emblematic United Nations’ programmes that have their origins in civil society mobilisation for positive social change: the Copenhagen Declaration (on social development, poverty eradication, productive employment and social inclusion); and the Beijing Declaration and Platform for Action that seeks to tackle sex discrimination and promote gender equality. These global initiatives resonate with WISERD’S ongoing, multidisciplinary five-year programme of social research on civil society. WISERD is the short name of the Wales Institute of Social and Economic Research and Data. It is a national, interdisciplinary, social science research institute. It is a collaborative venture between the universities of Aberystwyth, Bangor, Cardiff, South Wales and Swansea – working together to improve the quality and quantity of social science research in Wales and beyond. Since it was established in 2008, WISERD has continued to grow and has achieved an impressive track record in attracting more than £27 million in research funding to Wales. WISERD’s research spans the fields of social policy, economics, sociology, geography and political science.

A key part of WISERD’s work is an ongoing major programme of research funded by the Economic and Social Research Council. This has been structured around a number of themes and is best illustrated with reference to the new titles:

The first theme relates to individuals, institutions and governance. In his new book Putting Civil Society in Its Place: Governance, Metagovernance and Subjectivity, Professor Bob Jessop examines the way that structures of ‘governance’ (institutional arrangements for joining-up society, government and commerce) can facilitate and frustrate social change. Such concerns have featured in recent media attention to, for example, the form and functioning of devolution in the UK. The new volume by Bob Jessop considers the role that individuals play in advancing change (sometimes these are referred to as ‘social entrepreneurs’), as well as the limits and failures of economic and social policy in different governance contexts. Crucially, for all people interested in achieving positive social change, it sets out lessons for future social innovation. Notably, it also shows how one of the key challenges of the present age is to integrate civil society into governance, and release the power of social networks and solidarity to resist suppression by the state and economic interests and secure positive social change.

Another key theme is generation, life course and social participation. This is concerned with how civil society’s engagement in the structures and processes of democracy – as well as the functioning of society – is shaped by relations between different generations, and age contrasts in people’s engagement in social and political processes. The latter subject is addressed in the collection edited by Professor Sally Power, Civil Society through the Lifecourse. The new text addresses a series of key questions including: are young people blindly self-interested? How does university shape students’ political participation? Can busy parents and grandparents find time to volunteer? And, how do different lifecourse events and stages trigger and hinder civic engagement? A second new book related to this theme is Civil Society and the Family by Dr Esther Muddiman, Professor Sally Power and Professor Chris Taylor. This explores the link between the family, civil society and social change. It marks an original contribution to our understanding of the issues, because the relationship between the family and civil society has often been regarded as separate from, or even oppositional to, civil society. The book provides new evidence on how civil engagement, activism and political participation are inherited and fostered within the home – with reference to the impact of family events, dinner table debates, intergenerational transmission of virtues and the role of the mother.

A further theme underpinning WISERD’s work is economic austerity, social enterprise and inequality. This links to the fourth new title in the series, The Foundational Economy and Citizenship: Comparative Perspectives on Civil Repair, edited by Filippo Barbera and Ian Rees Jones. The ‘foundational economy’ is a term that refers to the provision of everyday goods and services that provide the basis for a civilised life such as food, transport, housing and water. The idea of the foundational economy (FE) has previously been described as what is left in post-industrial areas when previously dominant employers have disappeared. In these contexts, civil society organisations may step in with new and innovative ways of providing everyday goods and services. A further original aspect of this text is its examination of the foundational economy’s role in renewing citizenship and informing public policy. This new volume is co-authored by an interdisciplinary group of respected European academics who provide FE case studies of initiatives and interventions including housing, food supply and water and waste management. They set out an evidence base with the potential to provide a new political and social outlook on civil society and social justice.

As these new books suggest, civil society can act as a driver for positive social change. This happens in different ways and for a number of reasons. One reason is the social diversity that makes up civil society (it comprises multiple identities in relation to gender, sexual orientation, ethnicity, age, (dis)ability and so on). This is a resource that provides different perspectives on addressing social issues. Another reason is philanthropy and voluntarism (in other words, the willingness of people to give their time without pay). This is a potentially vast resource that can boost the capacity and quality of welfare and services available to people as civil society organisations work alongside public service providers and commercial suppliers in areas like health and social care. Finally, a further reason why civil society can deliver positive social change is in campaigning to safeguard and expand citizens’ rights – including fundamental human rights in areas like freedom of expression, asylum from persecution, and a fair and public hearing by an independent and impartial tribunal. WISERD’s research reveals a troubling international trend whereby, around the world, states are acting to suppress the voice of civil society and its ability to hold to account those in power. This means that civil society’s role in delivering positive social change by campaigning to safeguard and expand citizens’ rights is more important than ever.

We hope that you enjoy reading these new titles. They are available with a 20% discount when you order from Policy Press. Further titles in the Civil Society and Social Change book series will follow over coming months. If you are an author and are interested in contributing to the series, please contact one of the following: 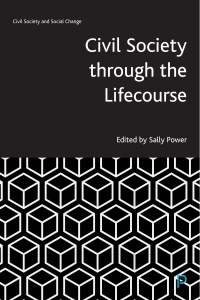 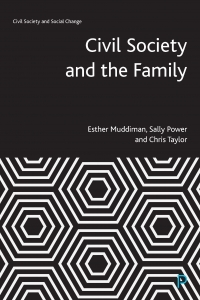 Civil Society through the Lifecourse edited by Sally Power, and Civil Society and the Family by Esther Muddiman, Sally Power and Chris Taylor are now available on the Policy Press website. Order the hardbacks for £60.00 or the EPUB versions for £21.59.