‘It is in war, famine, and epidemic that werewolves and vampires proliferate’, wrote Deleuze and Guattari in A Thousand Plateaus. I suppose this monstrous imagination is a way of coming to terms with mass death, suffering and the looming presence of danger. We require some explanation, especially when scientific ones are absent, or are deemed inadequate in the madness of post-truth politics. Things may be so bad that our only hope is, like Jonathan Harker while trapped in Castle Dracula, to ‘sleep without dreaming’, knowing that even ‘despair has its own calms’.

Yet those calms turn into agitated storms in an instant. Harker, for the record, didn’t go on sleeping, but managed to escape. Today we become agitated, particularly when asking – why can’t we control COVID-19 more effectively? Why didn’t we see this coming? The answers are, of course, that we can, and we did. Nihilistic politics have derailed such humanistic efforts.

The notion that we could ‘fact check’ Trump into compliance misunderstands the shifting ground of post-truth politics. While some news organisations still diligently provide this essential service, by now most acknowledge that Trumpism operates according to a different logic altogether. Outright conspiracy theories, for example, are by definition impossible to fact check, but nevertheless have a long and murderous complicity with fascism and authoritarianism (for starters, see Hannah Arendt’s The Origins of Totalitarianism). Post-truth politics may have a long history, but today in the US we are seeing a rapid and destructive mutation, one that threatens democracy in an unprecedented way.

While Donald Trump was first a media celebrity and master of commercial performance, few have commented on the links between consumer culture itself and his rise to power. The history of consumerist spectacle that brought us Trump can be summarised like this: modern capitalism built an entire infrastructure based on lies – the lies of commodity fetishism that have spread through society. Eventually, consumer culture infects political culture, changing the rules of the game. Trump is powerful, in part, because he reminds people of the blockbuster Hollywood action heroes they grew up with on the screen (also typically white and male, not surprisingly). Not everyone sees the problem with this. Most critics, myself included, didn’t take him seriously enough in 2016.

That failure was a fatal mistake that reflects our general neglect of theoretical traditions that could have helped identify such threats. Guy Debord’s The Society of the Spectacle (1967), while outdated and in need of revision, contains important kernels of truth that we require today to confront Trump. Walter Benjamin – perhaps the first theorist of spectacle – even saw a close and mysterious connection between modern industrialism, an emerging consumer culture and the rise of fascism in Europe in the first half of the 20th century. Throughout the second half of the century something similar has happened in the US that we are now watching unfold.

The spectacle nurtures post-truth sensibilities, and its suspension helps create the conditions for fascism to proliferate. Today we glimpse consumer society in ruins, especially in the post-industrial ‘rust belt’ geographies. While the megamall gave us our consumer identity under the spectacle, today it is destabilised and sometimes suspended by neoliberal globalisation. So many ‘dead’ or ‘zombie’ malls haunt the landscape, along with other signs of decline, dereliction and abandonment. The electoral shifts in these areas gave Trump the slight edge he needed to win in 2016 (along with voter suppression of many kinds). With little to assuage the traumas of deindustrialisation, along with the grotesque inequalities that characterise the neoliberal economy today, white working-class voters were ripe for recruitment into the cult of Trumpism.

This analytical approach does not ignore the racism, sexism, misogyny, xenophobia and nativism of Trumpism, among other authoritarian tendencies. Instead, understanding Trumpism requires us to chart the overlaps between a consumer society in crisis and these other long-standing vectors of power in postcolonial America. Trumpism is by no means an inevitable consequence of neoliberal inequality and decline, even if it does draw on the most troubling and unacceptable of political traditions.

If consumer society plays some role in the situation we face today, the pandemic provides an opportunity to think again. Nearly all of our consumer habits have been disrupted if they weren’t already. Not being able to do certain things forces us to imagine alternative ways of life that would have been impossible without such a sustained and traumatic event. As such, we might have a chance to imagine alternatives to the way we live that has brought us such wretched and unimaginable politics.

Indeed, some activist communities have long been aware of these risks. The problem, though, is that the spectacle today has spread into so many embodied habits, everyday environments, intimate expectations and taken-for-granted assumptions, an infrastructure whose ontological effects are too rarely up for discussion, even in radical or alternative communities. If the first disruption of spectacle (deindustrialisation) played a role in the rise of Trumpism, a second disruption (the pandemic) can help us better see a source of the problem that has received little attention to date (consumer culture itself).

If we survive the pandemic, we will have been able to see more clearly that there is more to life, and better understand how our participation in consumer society, while seemingly innocent on the surface, has too many negative consequences to simply resume once we reach the other side. Climate change, of course, is an existential crisis of the system, and now I think we face a major political crisis: post-truth absurdism allied with the far-right.

Hypothetically, change is easier to imagine today, now that we have been forced to stop and – we hope – reflect. Our hope is that we reflect not only on the monstrous politics of so-called ‘post-truth’ far-right extremism, but also on the more mundane details of the spectacle in ruins.

Jacob C. Miller is a Senior Lecturer in Human Geography at Northumbria University. 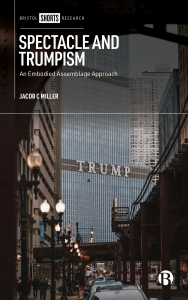 Spectacle and Trumpism: An Embodied Assemblage Approach by Jacob C. Miller is available on the Bristol University Press website. Order the Hardback here for £32.00 or the EPUB for £7.19.