Black women in the UK are five times more likely to die during pregnancy and in the year following birth than White women. These statistics have spurred the FiveXMore campaign, statements from the Royal College of Midwives and numerous newspaper articles detailing black mothers’ experiences of racism in maternal health services.

Black women’s disproportionately high rates of maternal mortality are just one example of how racism impacts Black mothers’ lives. The stereotypes that dominate representation of black mothers are another example. They are seen as ‘baby mothers’ who neglect their children, or as ‘strong black women’ who emasculate their male partners and deprive their children of fatherly input (Reynolds, 1997). In my new book, Black Mothers and Attachment Parenting, I challenge these depictions of Black motherhood by asking Black women about their experiences of and perspectives on attachment parenting.

Patricia: So because attachment parenting wasn’t something you necessarily saw in yourself, when was the first time you heard the phrase or saw the phrase?

Eleanor: As I say, when I was doing my research with my second child, pregnancy. Um…

Patricia: How did it come up?

Eleanor: It came up from White books <chuckles>. I mean, I say ‘White books’, it’s not White books, it’s parenting books that happen to be written by White people. And I find that most of the parenting books are written by European people and that’s not a problem, um, but I do see that it doesn’t, some things … it’s a hard one because you’re forced to accept that we’re all the same but I don’t feel that we are. I feel like there’s … cultural differences, I feel that there’s spiritual differences and there’s different practices […] And I always feel like … you get two ends of the spectrum, two extreme ends of the spectrum, you get either the hippies and tree-huggers, which, there’s nothing wrong with hugging trees and there’s nothing wrong with being a hippy. Or you get the ones where it’s a very clinical perspective and I feel like for me, I didn’t fit anywhere between. Although other Black people that aren’t necessarily like the way I am – and I feel like I’m a regular person – they would see me as being a hippy of some sort <chuckles> but I don’t see that ’cause … I don’t want to do what hippies do, people who openly, willingly call themselves a hippy, I don’t do those kinds of things, although some of the things are similar. So I feel like a lot of the information about attachment parenting is obviously there but because we don’t see ourselves in it … we don’t necessarily take it on and we assume that it’s a White thing not realising that these people have seen this in our cultures back home, whether it’s in Africa or the Carib-, well, not so much the Caribbean ’cause like the Caribbean has been indoctrinated in a certain way because of slavery and stuff but I feel like […] when they go to these places and see these things and then they think ‘oh, that’s a good idea!’ and then they take it on themselves and yet we’ve been doing it for long, longer. And I mean, it’s funny because … the little that I do know about history, I’ve seen that obviously during slavery times, Black women were the wet nurses. So while they’re being wet nurses for European babies they’re not able to look after their own so that became a normal thing. So for us to not breastfeed our babies, generation upon generation to now, is still seen as not normal but it’s acceptable when other people, when we see other cultures doing it, we don’t really necessarily identify ourselves with that and then when we start doing it ourselves. I don’t know if it’s a subconscious pain why we reject it, I have no idea but I get the sense that it stirs up something in Black women. And there are some women that are breaking boundaries and talking about it openly. Like, there’s Facebook groups, like, called, ‘Black Women Do Breastfeed’ and ‘Black Women Do Babywear’ and it’s funny because … I think the upsetting thing is that we, Europeans or anybody else doesn’t have to put their colour before their title … and we kind of do and I understand when people, you know, when you put your colour or your ethnicity before the title, it seems to make everybody else think that we’re being funny or we’re trying to cause a racial diversity or a racial stir and it’s not that. It’s just being able to, it’s the only way we can raise the issue and let us see ourselves doing it because if you just typed in breastfeeding in Google you’re not going to see a Black woman breastfeeding, you might see one pop up but you’re not really going to see it.

As I write in the book, Eleanor’s reclamation of attachment parenting as an African parenting philosophy was one tool in these mothers’ development of a counterhegemonic image of Black motherhood. Exploiting the Sears’ stereotypical rendering of African motherhood, the women claim a long history of good Black mothering. For Eleanor, acknowledging that attachment parenting does indeed belong to Black people is the first step towards raising awareness about the philosophy (and its African origins) among Black communities in the diaspora. Such a project works to counter negative controlling images of Black motherhood and provides material support to the optimal development of Black children.

Eleanor’s praise for attachment parenting (though that is not the name that she called her practice) combines an ancestral connection to Africa, a rejection of exploitative claims on African parenting practice and the deployment of an effective and successful childrearing strategy that she believes will best serve her Black children.

These framings of attachment parenting are entangled in one another and cannot be understood separately from Eleanor’s position in the matrix of domination (Collins, 2000) as a working-class Black mother raising her children in a racist society.

In my book, I explore her experiences further and those of other Black mothers.

Patricia Hamilton is a Marie Curie Research Fellow in the Thomas Coram Research Unit at the University College London. Her current project is an intersectional examination of parental leave policy development and use in the UK. 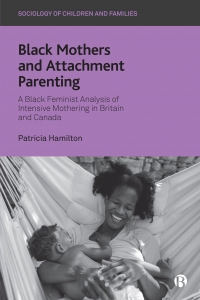 Black Mothers and Attachment Parenting by Patricia Hamilton is available on the Bristol University Press website. Order the hardback here for £60.00, or the EPUB for £19.99.