The UN General Assembly proclaimed 2015–2024 as the International Decade for People of African Descent. A core aim is to promote a greater knowledge of and respect for the diverse heritage, culture and societal contributions of people of African descent.

However, such people currently experience widespread racism and discrimination in all areas of life across the EU, including within employment, education and the criminal justice system. Across a larger geographically canvas, the murder of George Floyd, and many other African-Americans by the cops, and the disproportionately high number of Black and minority deaths associated with the global coronavirus pandemic has also added to concerns.

Within social work there are constant concerns about issues related to racism. Only last year, a survey of over 2,000 practitioners in England, published by What works for Children’s Social Care and associated organisations, indicated that over a quarter of social workers faced racism from colleagues or managers in a 12-month period. In Ireland, Black African families are ‘about seven times more likely to face child protection proceedings than are indigenous Irish people, and this figure is likely to be greater if the ’mixed‘ category includes one African parent’. Relatedly, over ten years ago, the manifest ‘lack of attention to cultural differences in child protection guidelines and child welfare legislation’ was not unreasonably perceived as a ‘tangible example’ of ‘continuing inertia’.

All of these global and national developments provided part of the political and temporal framing for our exploration of issues related to social work with the Black African diaspora. Our focus is on Ireland, but our new book has much wider resonance and contains important ‘messages’ for the profession, policy makers and public. Social Work with the Black African Diaspora covers an expansive theoretical terrain. We discuss, for example, some of the keywords, concepts and terminology that are often insufficiently examined in social work; for example, rather shallow notions preoccupied with ‘diversity’ and ‘cultural competence’.

We suggest that it is vital for social work, in Ireland and elsewhere, to be involved in the ‘conversation’ about decolonising education and practice because these are not simply abstract debates. Some of the core issues also impact and shape microlevel interactions when social workers engage with users of services who are Black African and or from other minority ethnic communities. The perspective we develop is not foolish dismissal of European philosophy and social theory. Thus, we refer to the insights of seminal figures such as Antonio Gramsci, Michel Foucault and Pierre Bourdieu.  However, we also draw attention to the work of the Portuguese legal scholar, Boaventura de Sousa Santos and we critically explore Critical Race Theory (CRT) and Critical Whiteness Theory (CWT).

Ideas circulating around Afrocentricity, and the contributions of figures such as the African-American author Marimba Ani, are mostly absent in Europe. However, Afrocentricity has had a significant impact on social work and associated spheres in the US. While recognising that it is important to consider this corpus of work, we are wary of its failure to examine how it neglects to locate racism within capitalist structures. What is more, we find a lack of adequate engagement with intersectional issues in the often strident contributions from those promoting Afrocentrism. In this context, we introduce some of the alternative conceptualisations honed by the Beninese philosopher, Paul J. Hountondji. Very much opposed to the reductive ‘identity politics’ of the Afrocentrists, his complex contributions are mostly unknown within the social work literature. We aim to rectify this by dwelling on the utility of Hountondji when grappling with issues relating to ‘race’ and culture. More broadly, we discuss social work in Ireland and the dominance of the neoliberal capitalist regime of accumulation and the institutional social orders than it generates and perpetuates. Comprehending this dimension and being attentive to the theorisation of ‘racial capitalism’ is, for us, fundamental.

A number of contributions have begun to explore the perceptions of ‘service users’ in relation to ‘race’ and racism, but frequently those providing the actual services have been missing. Important, therefore, alongside arguably rather abstract theoretical questions, was to root our book in the ‘local’ and to ‘hear’ the voice of social workers ‘on the ground’. A core section of our book is grounded in ‘listening’ to the perceptions of a racially diverse sample of 21 social work practitioners and four social work educators. Talking openly and with enormous candour, they outline their perceptions across four core themes relating to: social work education and theoretical perspectives; praxis; organisational structures within the capitalist racial state; and neoliberalism.

Our core findings indicate that social work education needs to evolve much more pluralistically expansive, and less Eurocentric ways of perceiving the social work task and the wider world. What is more, social work practice needs to adjust its core perceptions. This is reflected in a comment from one of our White Irish respondents:

“Is it not common sense that ‘when in Rome, you do as the Romans do’? So, when ‘foreigners’ come to Ireland, they should try to fit into whatever structures they find in place. Our job as social workers should be to try to facilitate them to do that by attending to transitional individual maladaptive behaviours. By coming to Ireland, they have consciously or unconsciously chosen to identify with Ireland or at least embrace things that identify with being ‘Irish’. The same applies to my Black African social work colleagues: when they come here and work for the Health Service Executive (HSE), they assume the same social work identity as me and, as employees, they are bound by whatever organisational cultures and structures that are already in place.”

Despite such views and largely because of the work of an emerging caucus of Black African and other minority ethnic social workers in Ireland, the profession – historically conservative and unthinkingly politically mainstream – may be pushed and prodded into taking a more emphatically anti-racist stance. This is reflected in the recent publication of an anti-racism ‘strategic plan’ by the Irish Association of Social Workers. However, such plans are likely to remain forlorn aspirations unless we are also willing to confront the more embedded and intersecting structures of domination characterising contemporary capitalism.

Washington Marovatsanga lectures at the Atlantic Technological University and he is a member of the Board of Directors of the Irish Association of Social Workers. Paul Michael Garrett is an educator and writer based at the University of Galway and he is the author of the acclaimed Dissenting Social Work: Critical Theory, Resistance and Pandemic. 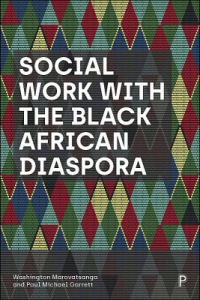 Social Work with the Black African Diaspora by Washington Marovatsanga and Paul Michael Garrett is available on the Bristol University Press website. Order here for £63.09.