Silicon Valley and the future of US politics

The most significant political event in the United States in 2020 was the countrywide George Floyd protests. Targeting the evils of institutional racism, economic injustice and the oppressive state-security forces compelling observance of this regime, the central idea was that a society and a process that condones systematic impunity of state officials cannot claim to be democratic. Having abandoned the rule of law, the regime lacks legitimacy.

The organisation of digital platforms is central to explaining this, and Biden must now consider that without extensive democratic intervention, lives will be irreparably harmed because of them.

Let’s begin with platforms. Amazon, Apple, Facebook, Microsoft and Alphabet are some of the most valuable firms in the US by stock market value. Similarly, Uber, Airbnb, YouTube, Snapchat, Instagram, Twitter, Fitbit, Spotify, Dropbox, WhatsApp, Tumblr and Pinterest are all examples of billion-dollar companies created after 2005. But this wealth is generated from exploitation and massive unpaid labour as users unwittingly turn their data into commodities. Statistically the 1 per cent owns 50 per cent of all stock, meaning that they are predominately benefiting from this political economic arrangement. While we laud the technology innovations they are responsible for, as matters like regulation and democratic life are much more complex it is easy to overlook their political innovations as they progressively concentrate power in the hands of even fewer people.

The investors in Silicon Valley control the inescapable foundation of the contemporary economy – cell phones, social networks, cloud computing, retail, logistics and the like – even while a good portion of the initial basic research is funded by the US government through military and university budgets. This is one reason to be suspicious of research initiatives into artificial intelligence and machine learning as the goods they may potentially yield are most likely to be privatised and perhaps even deployed against the public interest.

Take Uber as an example. While relying on the US government-funded GPS system, when courts ruled that Uber must comply with national labour laws around employment rights and duties for their drivers in 2019, the company threatened to suspend operations in California. In addition to threatening a capital strike, Uber created and amplified a deceptive ballot initiative for the California 2020 election cycle that would suspend employment rights for gig economy labourers. Through leveraging their considerable wealth and power and surrogates in media and politics, Uber, Lyft and similar companies spent upwards of $200 million to help Proposition 22 pass. This was the ‘most expensive measure in California history’. The result is that a single economic sector has effectively rewritten labour law at their discretion. This is telling about the coming recalibration of the burdens of risk between capital and labour, with labour likely to lose more ground and be relegated to permanent precarity. Effectively the exercise of venture capital is undermining the quality of democracy.

So not only do these digital technology companies shape everyday perception, collude to suppress wages and destroy public goods, cooperate with state security forces and turn into weapons system manufacturers, they are upending decades of concrete democratic practice. This trajectory is of utmost concern because it leaves the US ripe for plutocracy. And because of the central place of the US in the international political economy, this dynamic is at the heart of a global ‘democratic recession’ beginning in the early 21st century. That this is hard to identify is no mistake. This is because there is opacity by design. Platforms are in our hands, but we don’t have a hands-on understanding of how they affect politics.

This is why the George Floyd protests are so suggestive of all the factors that will shape US political development in the coming decade as citizens increasingly become aware that their rulers act without even a second thought to the interests of the working majority, a class that disproportionately comprises non-whites, and feel the full effects of coordinated state and market repression. If that statement feels too strong, consider the number of local police who dealt with the protests as an urban warfare operation, kitted out with equipment supplied by Silicon Valley. Indeed, there is an extensive catalogue of security forces proactively beating peaceful protestors, with a conservative estimate of around 100 incidents.

Certainly these protests were about racism and the lack of real effort to dismantle the institutions and policies that perpetuate it, but they also raise questions about who controls the platforms. Video feeds, hashtags and leveraging networks are central to making the issue of police brutality known. Writing about Michael Brown’s death in 2014, Zeynep Tufekci puts it so well:

“What Happens to #Ferguson Affects Ferguson… What if Ferguson had started to bubble, but there was no Twitter to catch on nationally? Would it ever make it through the algorithmic filtering on Facebook? Maybe, but with no transparency to the decisions, I cannot be sure.”

Without pointed discussion about corporate control of key infrastructure and code, in the near future protesters will be putting their bodies on the line in vain. 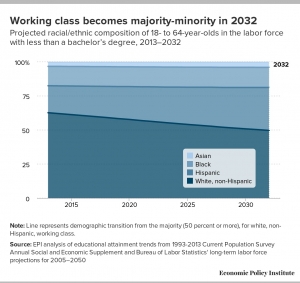 The widespread police violence during the George Floyd protests brought into sharp relief the current terrain of struggle in the United States against a punitive, highly stratified society, a society wherein the Trump Administration proclaimed that ‘the phony protesters’ are ‘not peaceful’ nor ‘real’, but ‘terrorists’. There was mild pushback from Democrats, with Senator Kamala Harris calling Trump’s response ‘not the words of a president. They are the words of a dictator’. But these kinds of statements ring somewhat hollow when Democratic leaders, like their Republican counterparts, protect the interests of capital. As Nancy Pelosi put it in 2017, ‘We’re capitalists and that’s just the way it is’. This is because they are similarly invested in perpetuating capitalism and the suffering wrought by American imperialism. Their platitudes may be different, but the effects are the same.

The ongoing dynamic of capital and constraint has brought systemic opacity around the role of class as well as how profit is accumulated. Indeed, the more critical processes that governors decide to automate, the more exposed society is to large-scale systemic harms. The ruling class has captured computational resources and is using them to drive its agenda. Effectively ‘algorithms of oppression’ may well ‘automate inequality.’ Given the specific opacity of the system but the general coding of machinery by capital, it is vital to study the consequences of digitisation, computational work and global social inequality as well as what they might mean for political development in this century.

Many of the issues I’ve raised – white supremacy, institutional violence, the code of capitalism and platforms mediating perceptions of social reality – were all contributing factors in the 6 January 2021 insurrection at the US Capitol. While it appears that among the insurrectionists there were some who were highly motivated to harm legislators, others were streaming, tweeting and taking selfies. This duality reflects how in the 21st century, power sits in two places – the exercise of force and the use of the digital realm to legitimate that force. Notwithstanding the important rebuke that a second impeachment of Donald Trump represents for inciting the event, the instability that his administration has wrought will endure not only because he has emboldened reactionary politics. Trump has also destabilised ideas on how to regulate and contest the unparalleled power of platforms, because current discourse focuses on users, not platforms, as very efficient vehicles for converting capital into rule.

If not democratised, digitisation will exacerbate the ‘disparities within disparities’. Accordingly, we must drive an analysis that examines and creates potential for equitable social change. Then we must follow through to quickly dismantle the institutions that resist that agenda. If the ideology and logic of capitalism is successfully encoded into these digital infrastructures, then we court social consequences that foreclose the possibility of politics, let alone activities that seek to shift the political frame. This will be to the detriment of democratic life for all.

Scott Timcke studies the politics of race, class, and social inequality as they are mediated by digital infrastructures. 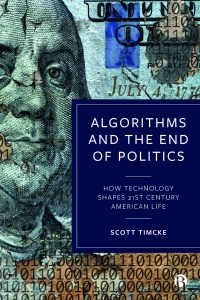 Algorithms and the End of Politics by Scott Timcke is available on the Bristol University Press website. Order the Hardback here for £60.00, or the EPUB for £21.59.