Austerity: what can we learn from the last crisis?

by Heather Whiteside Stephen McBride and Bryan Evans
12th May 2021

The opening decades of the 21st century have been marked by multiple crises which have reorientated institutions and understanding of the political and economic order, from budgeting and political priorities, to ideology, parties and class relations.

With economic recovery barely solidified after the Global Financial Crisis (GFC), in 2020 the world economy was once more buffeted by crisis – this one the result of the pandemic – and attention now turns to what lessons can be drawn from 2008 and its fallout. The predominant austerity response adopted around the world clearly represented a class-based capital accumulation strategy implemented by elite political-economic actors and organisations, articulated largely through neoliberal ideas of how the economy, society and polity should be organised. Fiscal consolidation, public sector reforms and the flexibilisation of labour markets presented a common thread in the neoliberal era. Yet austerity is not the same everywhere and these measures unfolded within the long arc of public sector restructuring and in the more immediate context of bailouts and related spending, increasing precarity and inequality, and the articulation of several forms of political justification.

Beyond the common thread of post-GFC austerity measures, there existed significant variety in relation to dynamics and degrees of institutionalisation, insulation and insinuation, which, in our Varieties of Austerity, we dub ‘the 3Is’. Another way of thinking of these 3Is are variations in how austerity is entrenched, where forms of protection (or the lack thereof) are offered, and who or what is blamed along the way. We identify the institutionalisation of austerity through particular agencies and organisations and as supportive processes that create an air of permanency for austerity-related approaches and customs. We illuminate insulation as a counterpart to restraint and removal, with redistribution and reforms adding complexity to bouts of austerity. Given that austerity is about more for some and less for others, and is indeed a process of multifaceted transformation with both winners and losers, we root out insinuation as burden and blame shifting – a crucial aspect of austerity in and of itself; burdens and blame are also important aspects of institutionalisation and insulation.

In terms of institutionalisation, the financial crisis of 2008, the ensuing and prolonged economic downturn and policies of austerity implemented from 2010 have imposed major costs on most Western societies. These include direct economic costs such as lower GDP, slower economic growth, higher unemployment and lost output, various forms of underemployment, much of it in precarious and poorly paid jobs, and increased household debt obligations that drag down disposable income. Other, perhaps less direct effects can be categorised as social and human costs. Phenomena such as inequality (a legacy of the entire neoliberal period) and higher unemployment and insecurity were exacerbated by austerity measures such as cuts in social and health care spending, and restructuring of the public sector and the labour market.

With some exceptions, the initial panic-induced response to the 2008 crisis was not one of austerity. Rather, as the prospect of a complete financial and economic meltdown loomed, most states and international organisations resorted to economic stimulus on a scale not previously witnessed in the neoliberal years. We have seen something even more ambitious during the pandemic with the Biden and EU recovery plans. However, back then the stimulus was short-lived. Once signs of economic stabilisation appeared, most states, such as those in the G20, declared austerity (in the sense of deficit and debt reduction, repurposing the public sector through privatisation and marketisation, and devaluing labour) to be a policy priority. Some countries experienced successive rounds of austerity that involved public sector freezes and cuts to budgets, services, programmes and employment. The result was drastically weakened public capacity to deal with future events.

Crises can also lead to the abandonment of dominant beliefs about how the world works. Insofar as insinuation and insulation are concerned, the key question is whether the ruling ideology is temporarily suspended or jettisoned into history. The COVID-19 crisis revealed the consequences of years of austerity: a lack of effective public capacity. National and international responses to the pandemic and the economic shocks caused by job losses, lockdowns and the collapse of some economic sectors like tourism and hospitality, show significant departures from orthodox approaches to public finance in the age of austerity. Countries in North America and Europe have allowed unprecedented monetary stimulus through central bank interventions, and fiscal rules limiting deficits and public debt have been ignored, at least temporarily. Fiscal austerity is on hiatus for now, but a lively debate is beginning about whether fiscal orthodoxy and its correlates, a diminished public sector and flexibilisation of labour markets will be reintroduced once the crisis is over, or whether this crisis provides an opportunity to fundamentally change the direction of neoliberal capitalism and to build a different type of society.

From both the 2008 economic crisis and the 2020 pandemic, populist left and right political parties and movements have emerged and the post-1945 electoral hegemony of the established centre-right and centre-left parties is in decline. For many millions within the working class, the lived experience of the previous three decades of private affluence for a few amid public squalor for the many is no longer accepted as inescapable. The COVID-19 pandemic has pulled the curtain back still further in its unique manner. Post-2008 austerity has magically dissolved as governments and central banks again find the means to finance all manner of public programmes which, before the pandemic struck, were utterly unthinkable. The grasp of Thatcher’s ‘there is no alternative’ is demonstrably broken.

And so the question for now and going forward is, again, what is to be done? The current crisis conjuncture provides an opportunity for reimagining a different future but as always there remains the question of power. There are serious social struggles to come, the outcomes of which might shunt neoliberalism into the dustbin of failed projects or see the return of more authoritarian austerity. We may equally see varieties of alternatives much more attentive to the ills of capitalism and its socioeconomic and environmental assault. One certainty, clearly demonstrated after 2008, is that progressive change seldom comes from above. 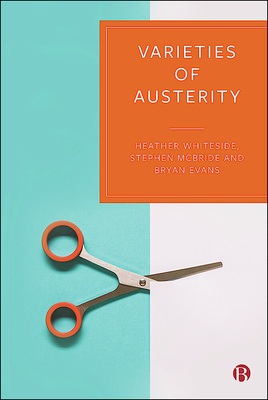 Varieties of Austerity by Heather Whiteside, Stephen McBride and Bryan Evans is available on the Bristol University Press website. Order here for £60.00, or get the ePUB for £21.59.

by Heather Whiteside Stephen McBride and Bryan Evans
12th May 2021