Abandoning austerity: Time for a new policy approach to grow out of the current crisis

Since the global financial crisis of 2008, austerity has saturated the social policies of countries such as the UK, Canada and the US, fragmenting and privatising services while degrading workers’ conditions and deteriorating quality to users.

The rationale for such policies embraced the neoliberal economic thinking that during times of downturn, cutting public budgets and reducing government debt generates market ‘confidence’ and a return to growth and prosperity. However, rather than restoring economic and social wellbeing, neoliberal policies curtail social obligation and solidarity, reducing public services and entitlements and replacing them with market and individual solutions to macro and micro social issues.

Prior to the COVID-19 pandemic, some of the main advocates of the austerity agenda (including the UK government as part of its re-election strategy) appeared to signal the end to austerity as the main economic tool and instead proposed the introduction of large-scale infrastructure projects and increased investment in areas such as health and education. Yet the Johnson government, like governments everywhere, has had to readjust rapidly as the pandemic has led to lockdowns of vast portions of industry. In the UK, billions of pounds have already been spent protecting some jobs and incomes through the now-extended furlough scheme, and through loans and grants to businesses. The impact on the UK’s public finances has been significant, with the national debt rising to £2.024 tn. The total debt for the first five months of the 2020–21 fiscal year of £174bn is greater than the total borrowed in one year at the peak of the previous financial crisis.

Concerns have been raised among some commentators about the level of this debt and the damage it will do to the long-term prospects of the economy. Governments are warning that austerity may have to follow in the light of the current crisis. However, serious consideration needs to be given to the costs of any return to the austerity agenda, either wholly or partially.

Our new edited collection, Working in the Context of Austerity, explores the impact of austerity on work and employment and provides insights into the impact of these economic policies on work, employment and services across a number of countries and sectors. Our authors provide a stark warning to policy makers regarding the risks associated with the continuation of any neoliberal agenda. The book highlights a series of work-related and gendered impacts that have broad social consequences, including restructuring of public services, attacks on unions, work intensification, stagnation of wages, increases in income inequality, rising vulnerability among migrant workers, increases in ‘gig economy’ work and the hollowing-out of the middle class. In terms of service provision, the collection shows that marketised solutions to delivering services to vulnerable people generates significant concerns with regard to service and job quality.

In addition, by identifying pockets of progressive policies and resistance, the collection highlights how potential beneficial initiatives such as the introduction of the living wage or the curtailment of zero-hours contracts have been stymied by the neoliberal and austerity policies’ hold on government. Though still mounting a defence of working people, unions globally face increasingly challenging struggles regarding the spread of precarious, fragmented and gig-like work under austerity.

To continue or even intensify the austerity agenda in the context of rising unemployment would be a serious error, further thinning and breaking the social fabric of our societies as growing numbers of people become destitute, and social unrest inevitably follows. To resist future austerity policies, the ‘deficit myth’ needs to be seriously debunked. As our volume confirms, the spectre of the public debt crisis was part of an ideologically informed austerity mythology that saw it as the key problem for governments to wrestle with. This was exacerbated by commentators and policy makers who equated the economy with a household that can go bust because of excessive government spending, therefore justifying the current and any future austerity measures. Yet current levels of debt are rising in the context of historically low interest rates and inflation, and considerable spare capacity in the economy as unemployment rises. Some economists argue that this context mitigates any risk from an increase in public debt spending by governments, and that policy makers can take advantage of the greater fiscal space afforded to them from deficit spending in such an environment (Kelton, 2020). Indeed, Stanford (2020) argues that deficits will need to soar in order to pull economies out of what will otherwise be the worst depression in the last two centuries.

We call for a major rethink of social and employment policies that can build alternatives to austerity and, in the process, address the environmental, social justice and equity questions that continue to plague our planet and disrupt the advancement of human rights for the most vulnerable and marginalised.

Donna Baines is Director and Professor of Social Work at the University of British Columbia.

Ian Cunningham is Head of Department and Professor of Human Resource Management at the University of Strathclyde. 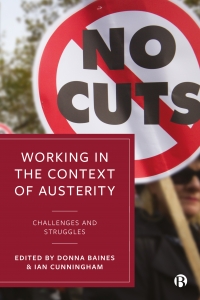 Working in the Context of Austerity: Challenges and Struggles edited by Donna Baines and Ian Cunningham is available on the Bristol University Press website. Order the Hardback here for £64.00 or the EPUB for £22.39.