The moment for living wages

The battle in the federal Senate in the United States for a $15/hour minimum wage is a critical moment in the pursuit of decent wages in a country that has severely diminished its commitment to working class living standards. At present, the federal minimum wage has remained stuck at $7.25 – less than half of the current $15 claim – for over a decade because of Republican refusal to address the issue of poverty wages. Although the federal Senate is a major legislative block to a universal $15 wage, other jurisdictions in the US have been responding to the activism of the Fight for $15 movement and momentum on the left flank of the Democratic Party to push ahead with improved hourly minimum wages at a state and city level.

Living wages are a ‘predistributive’ strategy – policies that deal with the distribution of wages and profits directly – now supported by a broad coalition of voters, activists and establishment political forces. For unions and the left, a living wage is an obvious, though limited, reform in the quest for a new moment for social democracy. But the appeal of living wages also extends to liberals and conservatives, for different reasons. For liberals, higher minimum wages are an appropriately limited response to rising inequality because they create an effective ‘floor’ for working class living standards without a major re-regulation of the labour market. For conservatives – including conservative voters – who focus on the ‘dignity’ of work, a living wage rewards commitment to work while providing sufficient resources for families at the same time. Working full-time for poverty wages violates expectations of many conservatives who believe market institutions should sustain independent living for working families.

In the US, the conservative appeal of the $15 minimum wage is illustrated by the recent vote in Florida in November 2020. The state voted comfortably for Donald Trump, but Floridians also voted by a 20+ point margin for this major increase in the minimum wage. A similar situation emerged in 2016: Trump won Arizona, but the same voters supported a ballot measure for a significant improvement in minimum wages. Sufficient working-class conservatives are prepared to support improvements to provide these measures genuine cross-party support.

Conservative parties, at least in the so-called liberal world of the Anglo-American welfare states, remain divided about more generous minimum wage floors. Despite working class conservative support, the elites of the US Republican Party strongly resist a higher minimum wage floor, remaining committed to what are effectively poverty wages for millions of American workers. Clearly, a low minimum wage is a key feature of an economy profiting from the efforts of a working poor, and not surprisingly, organised business interests continue to use their political influence to resist change. Even though ‘award’ minimums are higher in Australia, the conservative Coalition government is similarly resistant to protecting minimum wage floors. They prefer an austerity wages policy in the mistaken belief that such a policy creates more jobs – a policy model that has contributed to social decline in the US.

However, the UK Conservatives’ announcement in 2015 of a National Living Wage goal is an example of conservative conversion on this issue. Ironically, the Conservative Party had effectively abolished minimum wages decades earlier at the height of the neoliberal era. Their conversion had multiple motivations. The Government sought to significantly reduce ‘working-class welfare’ provided via the income support policies of the Blair and Brown era without looking like it was returning to the worst of Thatcherism. But the Party has also been looking to expand its appeal to conservative working-class voters, especially the Brexit-supporting older working class in England’s north. A living wage policy helped signal to wavering Labour voters that the Conservatives had made a basic commitment to a social contract recognising the dignity of properly paid employment.

Clearly, the living wage in the UK depended on New Labour’s response in the late 1990s to the harshest features of the Thatcher era. Policy stability followed: incremental adjustments improved the Kaitz index (the share that the minimum represents of the median hourly wage) and the Conservatives came to adopt a version of the Living Wage. Labour governments in New Zealand also drove major reform, with PMs Helen Clark and Jacinda Ardern making major legislative adjustments to minimum wages (see slide 11 here) during their respective periods in office. New Zealand has lower per capita incomes than other English-speaking welfare states, but policies that have pushed the minimum wage to NZD20 in 2021 have effectively lifted the living standards of low-wage full-time workers in NZ to comparable levels. OECD data suggests that NZ has a share of low-wage full-time workers similar to the Nordic countries that use industry bargaining to set minimums.

These achievements would have been less likely had it not been for a remarkable shift within mainstream economics. Liberal and libertarian economists had long dominated the policy debate about the social ‘harms’ of higher minimum wages; their warnings of major job losses intimidated legislatures into inaction, culminating in long-term policy drift. However, starting in the 1990s, new econometric research in the US began to suggest higher minimum wages were not translating into major unemployment problems for low-wage workers. Since then, the evidence of the welfare-enhancing capacity of higher minimums has continued to accumulate through the research of scholars like Arindrajit Dube. A little like the unfolding impact of Modern Monetary Theory on prevailing views of budget deficits, the effect of new scholarship on minimum wages has been to challenge the authority of ‘high neoliberalism’ that has exercised influence over both the right and the centre-left.

The living wages moment is not only interesting to scholars of industrial relations and labour markets. Living wages are a modest attempt at predistributive policy that should interest social policy and welfare scholars for two reasons. First, redistributive tax and welfare policies will find the 2020s hard going as austerity budgets eventually return, possibly with the support of a majority electoral coalition. Second, at the same time, record profits achieved by the ‘monopsony’ power of employers in the labour market can be partly ‘redistributed’ to workers through much stronger living wages floors whether achieved legislatively or industrially. Voters support such interventions where they waver on expanded ‘tax and spend’ policies.

Living wages matter to the fabric of our society: they improve worker health in a myriad of ways, hold one key for improving productivity and slow down the destructive churn of low wage labour markets. Conservatives and liberals see the strategic advantage of living wages reforms. But they envisage them only as protections against the dismantling of the market experiment. For activists of the left and scholars looking to rebuild welfare states, living wages represent a breakthrough opportunity. Many low-wage workers are women or from minority communities, so opportunities for achieving social justice by expanding the living wage agenda are significant. At best, these campaigns are a springboard for policy attention on serious problems faced by low-wage workers – the need for secure work, affordable or free housing, and the universal provision of low-cost childcare.

Activist resources invested in unions and community organisations that are producing living wage campaigns may be able to successfully expand their focus to these policy areas by encouraging legislators to extend public provision where overextended markets are damaging living standards. One promising idea closely allied to living wages is The Job Guarantee and for obvious reasons: states will need to do more to ensure full employment for low-wage workers who too often bear the brunt of severe income shocks during recessions. At the same time, protections against wage theft and the evasion of fair labour standards through contract arrangements all need industrial and legislative enhancement.

Such a programme will help propel the quest for improved minimum wages towards something closer to a ‘living wage welfare state’ agenda. Although it would hardly amount to an encompassing social democracy, it still represents a realistic challenge to conservative- and liberal-dominated policy making that has no compelling defence of poverty wages.

Shaun Wilson is Associate Professor in the Department of Sociology at Macquarie University. 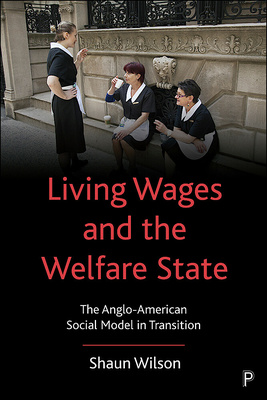 Living Wages and the Welfare State by Shaun Wilson is available to order on the Policy Press website for £19.99.