The COVID-19 pandemic has shed a light on how antiquated the law on marriage in England and Wales is.

Last summer when the initial restrictions were beginning to be relaxed, provisions allowing gatherings for the purpose of the solemnisation of marriage proved problematic. This was because a number of weddings were not covered by such provisions. A number of people have weddings that do not comply with the Marriage Act 1949 and therefore are not ceremonies ‘for the solemnisation of marriage’. This includes those conducted by belief organisations such as Humanists UK and those conducted by independent celebrants. The COVID-19 restrictions soon recognised such gatherings but the authorities tied themselves in knots trying to work out how to recognise them. Such weddings ceremonies – or at least some of them – came to be variously protected as wedding receptions, as events and as ‘alternative wedding ceremonies’.

In recent weeks, as the post-Christmas lockdown was beginning to be relaxed, there has been much criticism that rules on weddings have remained stricter than for other sectors. The government has responded by announcing that outdoor civil weddings are to be legalised on a temporary basis. Though presented by the government and the media as a major development, this change will actually be modest and limited. It only applies to marriages at approved premises conducted by civil registrars. It will do little to solve the backlog at registrar offices because much of that backlog is caused by those who have weddings conducted by independent celebrants and belief organisations that are not legally recognised under English marriage law meaning that couples have to undergo an additional civil ceremony at the registrar office.

The complexity and confusion caused on both occasions underscore the inadequacy of the current law on marriage in England and Wales, a problem that existed long before the pandemic. A number of wedding ceremonies now exist outside the scope of the Marriage Act 1949. These fall into two main categories. The first is what may be styled as ‘non-religious marriages’: those ceremonies that are conducted by belief organisations such as Humanists UK or by independent celebrants. Marriage law provides no means by which these can be legally binding in their own right.

The second category is ‘unregistered religious marriages’: these exist where the couple undergo a religious ceremony that does not comply with the Marriage Act 1949. Religious marriages are recognised under the Act but in relation to religious weddings other than Church of England, Church in Wales, Quaker and Jewish ceremonies, the ceremony must take place in a registered place of religious worship in order to be legally binding. Otherwise, though the couple are married in the eyes of their faith, they are not married in the eyes of the law.

There are several reasons why couples might have unregistered religious marriages: it may be the choice of the parties (in some communities, religious marriages effectively allow the couple to date, to be together without a chaperone), it may be because the parties are unsure of the law or it might be because it is difficult or impossible for a religious ceremony reflecting their beliefs to be held in a way that is compatible with marriage law requirements. Marriage law discriminates against those religions that do not have a building or that have a tradition of marriages taking place outside places of worship.

Couples who enter into either category of weddings need to undergo an additional civil marriage ceremony in order to become legally married. This causes additional expense and is viewed by many, not least the couple themselves as being unnecessary: who refers to their wedding as the happiest days of their life?

Moreover, many of these couples do not get around to the additional civil ceremony in the registrar office – and in some cases this is not a voluntary decision on the part of both parties – with the effect that they lack the legal rights that they often think they will have in the event of separation or death. They are in the same legal position as cohabiting couples under English law. Unlike many jurisdictions, there are limited rights afforded to them on relationship breakdown in England and Wales.

The law on marriage in England and Wales has failed to keep up with the changing social realities of adult intimate relationships in the 21st century.

My new book, Religion and Marriage Law: The Need for Reform, synthesises the debate to date and argues how a new legal framework on intimate adult relationships could be developed. It argues that there is a need to move from a system that regulates buildings to one that regulates officiants. This would solve the concerns around non-religious marriages and would lessen concerns about unregistered religious marriages, since the discriminatory requirements that prevent some religious weddings from complying with the law would be removed.

However, there would still be some unregistered religious marriages – and some of these would not result from a voluntary and witting choice by both parties. The introduction of limited cohabitation rights on separation would deal with this. Adoption of a system similar to the current Scottish model would provide an opt-out system that would allow parties on separation to allow a cohabitant to seek a financial order in circumstances where they have suffered a financial detriment as a result of the relationship coming to an end.

Russell Sandberg is Professor of Law at Cardiff University.

Read the accompanying policy briefing to the book here. 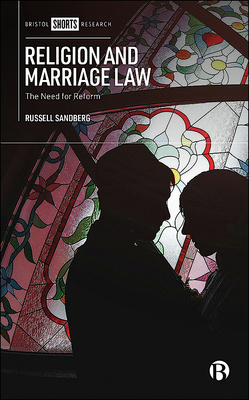 Religion and Marriage Law: The Need for Reform by Russell Sandberg is available on the Bristol University Press website. Order here for £32.00.