When one of the largest democratic economies in the world turns to an unelected ex-central banker to lead it through the recovery from COVID-19 and there is barely a ripple of comment about the implications for democracy, it speaks volumes. ‘Super Mario’ Draghi is managing the biggest single injection of capital into an economy by the EU, and the Italian people have had little or no say in the process.

Whether or not Draghi deserves this title, appointing temporary ‘dictators’ in times of crisis is hardly a new idea. The Italians did it previously, of course, back in 2011 to deal with the aftermath of the global crash. And the term ‘dictator’ itself comes from the practice adopted in Republican Rome, when a ‘two heads are better than one’ strategy for electing consuls each year was temporarily suspended – the argument being that one head was better than two when Hannibal’s elephants or Spartacus’s slaves were banging on Rome’s door.

But is the suspension of conventional politics during times of crisis really such an acceptable norm? Should we be more troubled by the enduring idea that, no matter how many crises their actions trigger, financial experts independent of democratic decision making are still the best option for overseeing our money? Certainly, the positive response from global debt markets to Draghi’s appointment suggests avoiding democracy certainly carries the approval of his peers in the global financial system.

Our new book, Crowdfunding and the Democratization of Finance, explores these and related questions concerning our relationship with money and finance, and how the fortunes of our democratic systems, ever since their inception in Athenian Attica in the sixth and fifth centuries BCE, are tied to the way finance governs our money.

We argue that the willingness of democracies to make finance ‘independent’ is rooted in longstanding taboos about money that can be traced back millennia. Simply put, we don’t trust ourselves when it comes to money, particularly when we are spending or investing. Money is a human construct, like language, but we have become increasingly fearful of its influence. To cope, we have built moral systems and values around money that affect both its understanding and use, and therefore who we feel should take control of it.

Finance’s ability to make more money from nothing but itself runs counter to our belief that money should be ‘hard earned’. Sudden increases in wealth – winning the lottery or gaining an inheritance, for example – can cause significant stress, as the influx of money literally changes our family and social relationships. Western democracies, largely built on the idea that anyone can become a billionaire, thus struggle with the realisation that dreams can turn into nightmares, as close friends and family become dramatically uprooted. Perhaps we should not be surprised that ex-central bankers are fond of writing books about the need for ‘values’ in finance.

We argue that money is the greatest catalyst and enabler of social change. Our analysis comes from a deep understanding of the world of crowdfunding, a much misunderstood upstart in the financial world, which has arguably been the fastest adopted ‘financial technology’ (FinTech) innovation of the late modern age, present in more than 180 countries and with hundreds of billions of dollars being donated, loaned and invested. As a 2,500-year-old ‘new idea’, we see crowdfunding as a form of democratisation that attempts to put the people back in control of the key decisions about their money and the impact it has on the world. In being able to make transparent decisions over what kinds of projects money should be delivering, crowdfunding forces money from the shadows of mainstream banking and increases the chances of better outcomes for people and planet.

As billionaires become increasingly lost in space, we may rightly worry about their influence and what others who control vast amounts of money and power/authority consider to be useful outcomes.. And yet, their USD$8 trillion of collective personal wealth remains tiny in comparison to the more than USD$111 trillion we have entrusted a very few, very powerful investment companies. It is the decisions of these organisations, more than the sky-high ambitions of a few individuals, that will truly decide who wins and who loses in the transition to a net-zero economy and whether that greener world will also be a fairer world.

As the film director, Richard Curtis, highlights via his Make My Money Matter campaign, it is your money – whether in your pension or your investment plan – that is 21 times more effective than your consumer spending when it comes to using the awesome power of money to tackle the climate emergency. Putting more control over investment decisions back into the hands of people themselves may be the best hope – our only hope – for securing the future wellbeing of our democracies and our planet’s ecosystem.

Mark Davis is Associate Professor of Sociology at the University of Leeds. Bruce Davis is Cofounder and Joint Managing Director of Abundance Investment. 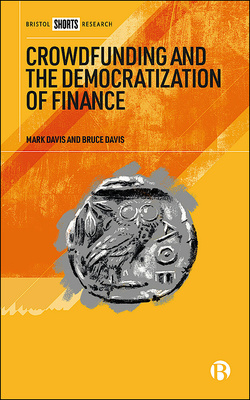 Crowdfunding and the Democratization of Finance by Mark Davis and Bruce Davis is available on the Bristol University Press website. Order here for £20.00 (before Midnight Sunday 12 September).