The publication last month (August 2021) of the World Health Organization’s toolkit for creating a dementia-friendly society marks the latest step in the coordination of a worldwide effort to tackle dementia as a global health challenge. But what does dementia-friendliness mean in practice, and whose purposes and interests do these initiatives ultimately serve?

Dementia-friendly initiatives have been loosely defined as any activity that contributes to making society dementia-inclusive. The urgency for change is underlined by estimates that 50 million people around the world are currently living with dementia and more than 150 million will likely be affected by 2050. An emerging dementia-friendly communities and initiatives (DFCI) agenda looks beyond medicalised approaches to anchor dementia in place, foregrounding the social and physical environment as offering resources in managing life with dementia.

This focus on dementia in the community represents an important shift in thinking and approach in three key respects. First, it marks a new geography of dementia as care and support migrates from institutional settings to private homes and neighbourhoods. Second, it points to a new temporality, as medical nihilism is replaced with notions of ‘living well with dementia’, transforming dementia from a terminal to a chronic condition by focusing on life after diagnosis. Third, it foregrounds an alternative sociality by putting greater emphasis on a collectivised response to the condition. At least in theory, responsibility for support now rests upon a far broader range of non-institutional and locally based actors from retailers and cultural sector workers to those employed in sport, leisure, education, banking, business, transport and tourism.

Yet, this programme of place-based strategies, modelled on the more established Age-Friendly Cities and Communities (AFCC) movement seems to transcend time and place. The generic advice on offer supported by a push to standardise care and support overlooks the particularities of place. This approach is unable to accommodate the histories of places, the institutions and people that make them, and the ways in which places are contested. It also glosses over the socioeconomic conditions in which people live, and differences in experience of the condition according to questions of gender, class, ethnicity, age, sexuality and disability. The DFCI movement thus overlooks local cultures of care and support and assumes certain shared experiences of dementia in time and place.

Less vocal in the DFCI debate is a supporting critical analysis that links policy ambitions to the realities of people’s day-to-day lives, in place. For instance, who determines what dementia inclusivity is and how it is to be achieved? What does accessibility actually look like ‘on the ground’ for someone living with dementia? And what are the processes by which social, cultural and political participation can become a reality for people who, until recently, were sequestered in care homes, often against their will? Until now, research into the direct experience of neighbourhood living for people with dementia has been limited, and what does exist focuses largely on affluent Western nations. This means very little is known about life with dementia outside institutional environments, or about the differences between people living with the condition in diverse circumstances and situations. Indeed, set against the backdrop of policies of fiscal consolidation (i.e. austerity) which have led to over a decade of severe and ongoing cuts to local government budgets, there is a real danger that the language of ‘dementia-friendliness’ is serving to mask the impact of widespread incremental cuts to services and support in many parts of the world. Under the banners of ‘living well’ and ‘dementia-friendliness’, neighbourhoods have become a focus for interventions including a range of educational and training programmes aimed at supporting resilience, self-care, self-management and peer support. This raises questions of whether DFCIs are serving to facilitate the withdrawal of state involvement in the lives of people with dementia, while passing costs and responsibility to local communities and ultimately to families and the individual, as some commentators have already argued of the Age-Friendly movement.

We are supportive of expansion from the medicalisation of dementia but argue for a shift in the focus of existing debate away from questions of individualised vulnerability and health status, and towards an understanding of how the condition impacts on community networks, structures, routines and processes. We understand the social and physical environments in which people with dementia are embedded, not merely as the containers in which life unfolds but as integral to the way that experiences of dementia are produced. This means foregrounding the interconnectedness and interdependence of people and places; centring the neighbourhood, while decentring the individual. We need to pay closer attention to the patterns of privilege and disadvantage that configure and differentiate neighbourhoods over time and space, and to consider how they generate unequal outcomes for different groups and individuals. This supports arguments for an experientially led approach to change that understands the particularities of place from the perspectives of those who live in and travel through it, not just a helicopter view that can treat neighbourhoods as standardised entities with shared properties and constituents. Consequently, we call for a neighbourhood-centred rather than person-centred approach to dementia, where neighbourhoods themselves are understood and defined experientially – from the ground up.

Richard Ward is Senior Lecturer in Dementia Studies in the Faculty of Social Sciences at the University of Stirling.

Andrew Clark is Professor in the School of Health and Society at the University of Salford.

Lyn Phillipson is Principal Research Fellow in the School of Health and Society at the University of Wollongong. 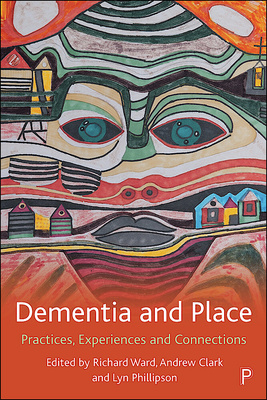 Dementia and Place: Practices, Experiences and Connections edited by Richard Ward, Andrew Clark and Lyn Phillipson is available on the Policy Press website. Order here for £19.99.