Reframing the risks to mental health in later life

We hear a great deal about older people with health problems being a ‘drain on resources’, on the NHS, on care services and on their families. They are portrayed as ‘takers’ and as somehow not having a right to support or to high quality treatment and care. This is being felt more that ever as coronavirus spreads with older people being more vulnerable.

The fact that the majority of older people do not need care, are not in a care home (this only applies to approximately 5% of all those aged 65 years+) and have contributed all of their lives to paying taxes is not considered. This negative discourse is particularly perniciously applied to older people who need to rely on publicly funded care and who have complex needs that require the input of a number of different services, for example the NHS and local authority funded home care. It is also a prominent feature of media reports about dementia; a toxic mix of dementia as a feared condition, a tsunami that will cost us all a great deal of money, pity for ‘dementia sufferers’ and, occasionally, condemnation of a care home which is exposed as abusing or neglecting residents with dementia. It is also interesting to note – and contrary to what is widely believed – that nearly a half of all spending by local authorities is on adults under the age of 60 years.

A parallel narrative constructs functional mental health problems in older age, particularly depression, as a natural response to decline, loss and dependency. This not only ignores the causes that lie outside of age-related losses but it adopts a linear purview of late life mental health. When you hit 80 years old (or perhaps younger) it’s downhill all the way! It is true that age related losses, of all kinds, challenge mental health: if these losses occurred in the same number in your 30s they’d challenge it then too. But what of the role played by issues such as domestic abuse, poverty, poor housing and/or discrimination? These are issues that we know undermine mental health amongst children and younger adults but we tend not to think about how they may affect older people. It is more comfortable to make causative connections between loss and depression than between abuse or poverty and depression. Many older people who are poor have been poor all their lives and have accrued multiple poverty related health problems, including higher levels of physical illness and disability and the stress caused by constantly worrying about affording essentials such as food and fuel.

Abuse, in all its guises, is axiomatically associated with poor mental health, particularly depression, anxiety and post-traumatic stress disorder. This is true for people of all ages. Ill health, dependency and (advanced) dementia amplify the risks of abuse in both domestic and service settings. These risks are more commonly experienced by older people, mainly older women. Whilst there are public and policy concerns about abuse when it is recognised – and it is hugely under-reported – responses tend to locate the problem at the feet of an overworked and exhausted family or paid carer rather than recognising the contributory role played by factors such as limited or no support services for carers and/or their relatives, zero hours contracts and, in care homes, placing profits before a safe level of staff cover.

The complexity and physical and emotional challenges of caring for an older person with multiple needs, especially dementia, is underestimated. Most of us simply don’t want to think about it and we certainly don’t see why we need to pay (more) for it; after all caring for a relative is a ‘natural’ familial duty and working as a paid carer is an unskilled job ‘anyone with a good heart can do’. It is discomforting to note that the biggest growth in the population of family carers is amongst those aged 85 years and over. There are now over 87,000 carers in this age group; most are spouses and many have health problems of their own. So…. not all older people are takers and, in fact, one could argue that the state is abusing the commitment of older carers to providing support to their relative to the detriment to their own health, wellbeing and quality of life.

There has been a recent policy interest in ‘reducing loneliness’ amongst older people. It’s been described as ‘sad’ and even as ‘scandalous’ that we as a society are ignoring the ‘epidemic of loneliness’ amongst older citizens. It is also presented as a ‘condition’ that needs ‘treating’ via interventions such as social prescribing. I’d make two observations about this: firstly, loneliness is caused, or made worse, by social conditions particularly socio-economic disadvantage. Being poor limits one’s opportunities to go out and meet friends or attend a class at a leisure centre; it is also associated with stigma and shame. Whilst social prescribing may be able to offer advice about access to free services such as a church club, it is disingenuous of policy makers to ignore the structural causes of isolation and loneliness and fail to ‘prescribe’ more money for state pensions and community resources such as libraries and bus services that play an important role in bolstering an older person’s social network.

I want to make a last point about the lifecourse. Although links between a lifecourse characterised by socio-economic disadvantage and poor physical health outcomes, such as higher levels of heart disease, is well established, there is growing evidence of links with poor mental health outcomes too. I offer three examples by way of illustration: the long term effect of being ‘at the bottom of the heap’ induces stress related responses that undermine mental health; exposure to adverse experiences in childhood (e.g. neglect/abuse, poverty) has a lifelong association with increased risk of depression, anxiety, self-harm and suicide (Hughes et al, 2017); and recent research suggests that a number of the risk factors for dementia are linked to lifecourse exposure to disadvantage (e.g. low levels of education) (Livingstone et al, 2017).

My overall argument is to challenge ‘the usual culprits’ when thinking about the causes of mental ill health amongst older people. Obviously, age related losses undermine mental health, but lifecourse and structural risks play a significant role too (Marmot, 2020). If we are to prevent poor mental health outcomes in later life we need to pay much more attention to reducing disadvantage, abuse, and poverty at all stages of life and learn from older people themselves about what both damages – and promotes – their mental health and wellbeing. 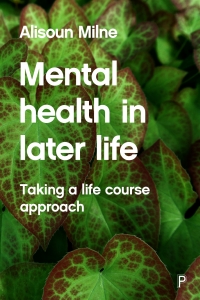 Mental Health in Later Life by Alisoun Milne is available on the Policy Press website. Order here for £23.19.

Image Credit: Alamy/JSMimages (from cover of the book)