On 31 July, the federal moratorium on evictions in the US expired. The moratorium, which had been the only thing keeping millions from being removed from their homes amid the ongoing economic collapse associated with COVID-19, was not serving its purpose to begin with, as thousands of people around the country were nevertheless removed from housing throughout the pandemic.

Three days after its expiration, the Biden administration announced that a new moratorium was forthcoming, having tasked the Centers for Disease Control and Prevention, currently perhaps the most embattled of the nation’s public institutions, with assembling regulatory guidelines that would hold off the upcoming wave of evictions in areas ‘experiencing concentrated outbreaks of COVID-19’. On 3 August, the CDC issued new and even more limited and easily bypassed protections for renters. In the UK, meanwhile, the government has extended a moratorium on any evictions of businesses unable to pay their rents while declining to extend a similar ban on residential evictions.

These scant measures in the US and their counterparts in the UK (and more or less every other liberal democracy around the world which is experiencing some version of the same crisis) amount to something between no support at all and open hostility towards workers, renters and the already houseless. Around 17 months on from the start of the pandemic, it seems that dying or suffering from coronavirus infection is becoming normalised, just like dying from street violence, police murder, drug overdose, workplace injury, suicide or hunger – so long as it’s the poor who die.

The misery of the pandemic, though, isn’t purely biological, and just like the ‘long COVID’ experienced by so many who have contracted the virus, we are also likely to see a long crisis of eviction and houselessness as wages remain stagnant, work becomes more and more dangerous, and the politics, economy and cultures of Western liberal democracies serve only the desires of property and its owners. 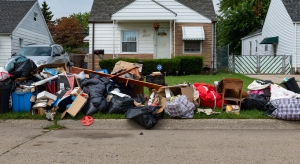 What, though, will the impending wave of evictions look like when it comes? It will, obviously, look like the image above. Those evicted, it goes without saying, will be the poor, as the threat of houselessness looms only over the heads of the unpropertied working and criminal classes.

What we might not see so clearly in images of belongings on kerbsides and families removed from their homes, though – and what the visual turn in criminology and sociology, which encourages us to consider not just the image but the conditions of its production, can help to reveal – is the liberal state lurking in the background, most visibly in the cops that carry out evictions, whose bodies are always the offensive front line of the violence of capitalism. Police, after all, are the only clear symbol that remains of a state largely in retreat from the material demands of politics: the traditional spaces of working-class life and political organisation, from the commons to the floor of the organised union factory, have either been sold off, privatised and (re)claimed by capital or crushed by decades of anti-worker legislation and the sort of manufactured cultural sentiment wielded so effectively by the global political right. Defending this set of arrangements and conditions are the cops.

When students in the UK revolted in 2010 over proposed cuts to higher education and hikes in national tuition caps, they were met by police, not university chancellors. When occupiers in New York’s Zuccotti Park saw their tents torn down, it wasn’t by a brigade of combative bankers, it was by police.

The evictions and attendant housing crises looming in the wake of the pandemic will surely be the same, not only because police will be there playing the defining role of the material functionaries of state violence, but because it will be violent. While there has been something of a turning point in the ways police and police power are understood – the high-profile killings of George Floyd and Breonna Taylor, alongside the global rise of the Black Lives Matter movement have all changed the perception of cops – conversations about the problem of police remain consumed by the language of ‘police brutality’. 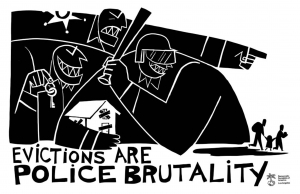 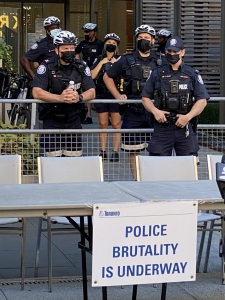 Police, of course, is a brutalising power, and cops, of course, are brutes, bullies and killers. As plainly visible as the fundamental brutality of police is, though, we seem content to only find it in its most immediately visible form: pictures and videos of police beating, killing, gassing or otherwise physically tormenting the subjects of its power. As the images above indicate – a sign produced and installed in Toronto in response to the evictions of a large encampment there, and a poster produced and distributed in Los Angeles by the Democratic Socialists of America – the cruelty of eviction is enabled only by and through the brutality of police.

Just as Dylan Rodriguez has reminded us, when the ‘brutality’ is sanctioned by the state and by law, and even baked into our cultural expectations of police, it’s not brutality, it’s just routine policing. As visual criminology suggests, we should reorient our vision in order to see the even more routine and ritual brutality of a political economy, culture and set of material conditions organised almost entirely around and by police power and cops.

So, when the evictions come, will we see their brutality as another act of class war by police against the immiserated and criminalised poor? In the US and most of the Global North, at least, I think it is unlikely. Rather than seeing them for what they really are – a clear illustration of the permanent and elemental entanglement of capital and property with a debilitating and brutalising police power – it is more likely that we won’t really see them at all.

If the elemental violence of capital, property and the COVID-19 pandemic and its consequences are to be overcome, we should endeavour to see it in some of the places it is most evident: in evictions and police. 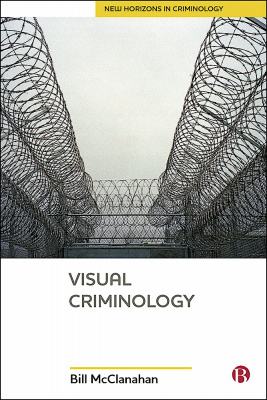 Visual Criminology by Bill McClanahan is available on the Bristol University Press website. Order here for £48.00 or order the EPUB for £17.59.